Great ending to a great season
By Shelby Yorde
NORTHRIDGE - The girls varsity basketball team ended their season on Wednesday, February 26th in a tough loss against North Union 57-39 in the district semi-finals. The team went 11-13 for the season, broke many records, and even came out as Sectional Champs.

The team also came a game away from being first in the league and was able to sweep rival Johnstown.

50% of the team are seniors and will not be returning next year. “It truly was a story book season for us seniors,” says Payne. The team would encourage anyone who is interested to try out next year.

- Shelby Yorde (‘20) is the chief print editor for The Viking Vault.
Girls getting ready to Play Ball
By: Sydney Koker
NORTHRIDGE - The girls softball program has had its ups and downs for the past few years. New coaching staff has been brought in what seems like every other year. This year, new head coach Mike Beaver has the team feeling stronger than ever. Ali Zigo (‘20) says she anticipates Beaver to have “a positive impact on how the team’s season will go.”

The season is officially in full swing with tryouts wrapping up recently. The girls are more than excited to actually get out there after a long preseason in and out of the weight room. Lizzie Looker (‘22) said, ”I’m expecting us to actually win games and we worked really hard for this so hopefully we go pretty far.”

With only a few juniors and seniors, the program is pretty young this year. When chatting with Megan Payne (‘20) she mentioned how young the team really is with quite a few freshman. She said, “I’m really excited to see them get the experience this year and watch them grow as a lot of them get their first varsity experience.” Payne has high hopes for this year's season.

This being the last sports season for the seniors before graduation makes the season mean that much more to them. Payne said she hopes that this year's seniors leave a large impact behind for the athletes in years to come to look up to.

After talking with all the players they all seem very eager to get their first few games under their belts to see how preseason workouts really helped them. Rachael Webb (‘21) said, “I've never been more excited for a softball season, and I can’t wait to get out on the field with the team and see the improvement against an actual opposing team.”

- Sydney Koker (‘21) is the head of Viking Vault Media
Baseball comes out swinging with new coach
By: Alex Hook
NORTHRIDGE - The baseball team is looking to a step in the right direction after being runner up in the District Finals for the past two seasons. This past season, the Vikings finished with a 15-12 record and lost in an extra inning walk off in the District Final.

The team will have a new Varsity head coach after the previous coach, Jeff Wilson, retired after nine seasons of coaching. Jeremy Young, the new coach, coached the Junior Varsity team at the school for the past two seasons.

Young says, “I am happy to take over the Varsity team because this is a strong group of young men who have worked hard all winter, and you can tell they all want to win.”

When asked how he felt the upcoming season is going to go, Young says, “I am really excited for this year because we have a lot of senior leadership on the team, and there is also a lot of talent to go along with the leadership.” The team will have ten seniors this year on the team, after graduating six from the past year.

Jake Reese (‘20) says, “This past season definitely left a salty taste in everyone's mouth because we all felt that we had a good enough team to make it past Districts, and I think it is making everyone hungry to get past Districts this season.” Reese received Second Team Licking County League this past year.

Logan Ullom (‘21) received First Team LCL and Second Team District this past year. Ullom says, “I can’t wait to get back outside and get on the field, the team this year has a really good bond with another and everyone enjoys working hard.”

The Vikings will open up the season with a double header at Highland High School on March 28th. Reese says, “Hopefully we get good weather for the season opener and there isn’t any snow on the ground.”

- Alex Hook (‘20) is a Sports Editor for The Viking Vault 20ahook@northridgevikings.org
Track expects to be competitive in LCL
By: Lyndsey Stocks
NORTHRIDGE - As winter sports seasons are all coming to an end, this is just the beginning for Track & Field. After working hard in the off-season with lifting, indoor track, and winter sports, the athletes in track are ready to finally start competing outdoors again.

Jay Campbell, Head Throwing Coach, says, “I’m really looking forward to this season. We have a lot of key returners coming back and I look forward to us being very competitive in the LCL.”

Track practices officially began near the end of February. Both the girls and boys teams are looking to win the LCL Championship this season. Cole Fox (‘20) explains, “We want to win LCL’s … We are tired of being in second.”

The girls’ team is the current back-to-back champion of the LCL. “I’m really hoping we can do it again,” says Olyvia Ashbrook about earning another title this season.

The effort and dedication put in by these athletes has not gone unnoticed by the coaches. “Everyone has been working hard,” explains Richard Featheringill, Track Head Coach.

With the first meet of the season being on March 28th, the Vikings are looking to start their season off strong.

- Lyndsey Stocks (‘21) is the Assistant Web Editor for the Viking Vault 21lstocks@northridgevikings.org 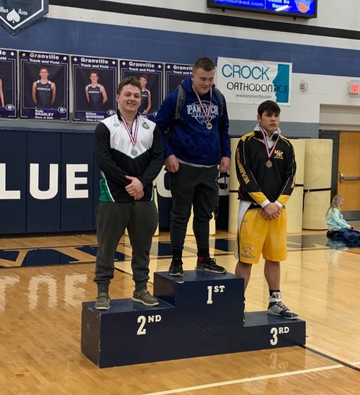 Kyle Saloum (‘20) ended his senior season as an alternate for District finals. He is the only member of the varsity team that the wrestling team will graduate this year. Courtesy photo.
Wrestling finishes small but strong at districts
By: Macy Hart
NORTHRIDGE - This winter’s varsity wrestling team featured a challenge with numbers, starting with thirteen wrestlers and ending with six, but coaches say the future of the program looks bright.

Of the five who wrestled in the season’s ending LCL meet, all five placed in the top four amongst all the wrestlers from the eight schools. “Only one senior will be leaving,” said Assistant Coach Trent Olds. “We’ve got a lot of young talent, and our coaches are committed to building this program back up to a point where we can compete for an LCL championship.”

The team competed in eight tournaments. At the Sectional tournament at Ridgedale  High School, the Vikings had a lot to brag about. Parman won four matches there and finished fifth in the 106 weight class. In the 126 weight class, Fister won a match, and Dowdy also won a match in the 138 weight class. Bailey won two matches at the 160 class, and Saloum won four matches to place fifth in the 220 class. Saloum and Parman both went on to serve as alternates for Districts on March 6 at Heath High School.

Head Coach Mr. Mike King says, “In a sport like wrestling being coach-driven is us kind of pushing them to do well, but a lot of it is being self-driven. They have to want to win by themselves because they are on the mat by themselves.” King, who also teaches History at NHS, says the team’s “work ethic” is their strong suit, which doesn’t depend on numbers.

First-year wrestler Tyler Harder (‘22) says, “I was a little bit nervous when the season started because it was my first time trying it.” Harder was disappointed by suffering a concussion early in the season that kept him from finishing the last three tournaments. Harder says he is excited to come back to the program next year.

- Macy Hart (22´) is a student writer for The Viking Vault. ​
Back to Top
Powered by