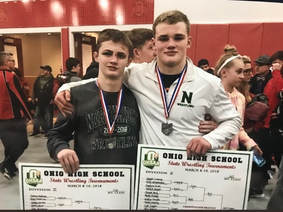 NORTHRIDGE- Three Northridge students attended state tournaments for their respective sports over the past month. The students include: Riley Bunstine (‘20) for swim; and Klay Reeves(‘19) and Forest Belli (‘18) for wrestling.

Belli finished out his final wrestling season by finishing runner-up at states in the 160 weight class out of 16 other wrestlers. The state tournament occurred March 8th through the 10th at the Schottenstein Center in downtown Columbus.

When asked how he felt on his runner-up finish at states, Belli replied, “I’m happy with the experiences I’ve been able to be a part of and [I’m] proud of my season. However, ultimately I am disappointed with the ending.”

Also Belli had this to say about his teammate, Reeves: “Klay wrestled a fantastic season, and I’m grateful we were both able to experience this together. I hope he brings home the title next year.”

Reeves also wrestled at the state tournaments in March. He wrestled in the 126 weight class and also finished 2nd out of 16 wrestlers.

Reeves said, “I’m glad that I have improved from my last two seasons and I’m still improving, but second isn’t fun.” He went on to note, “I’m proud of Forest for working and getting to states, and I couldn’t ask for a better experience to participate in the tournament together. We have trained together forever, and Forest has been able to accomplish so much over his years of wrestling.”

Northridge also was proud to send Buntine to states for swim at Denison University. Bunstine finished 24th in the 100 yard backstroke but was swimming with pneumonia during the meet.

“It was a great experience and I wouldn’t take it back for the world,” she said. “However, it is very hard to swim when you have an illness and no energy.” Bunstine also added, “But I’m only a Sophomore, so there is time for improvement and for me to keep getting better.”

Northridge is proud of all the student-athletes that were able to make their way to state tournaments and hopes the best for them in future seasons or, in Belli’s case, college. 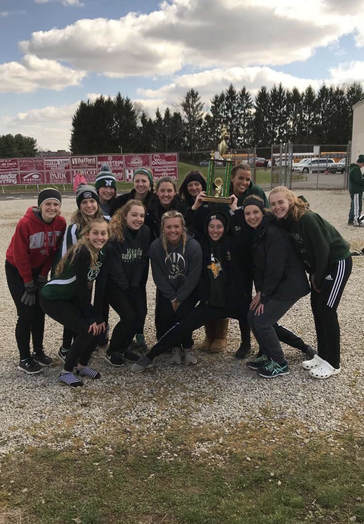 ​NORTHRIDGE- We are now in full swing when it comes to our spring sports, despite snow hanging on to mid-April. That includes our track team, already in the midst of what is expected to be a promising season.

With roughly 60 members on the track team, there are plenty of talented student athletes to fill the place of another athlete in the event of an emergency, such as illness or injury. That depth will be crucial as the season progresses.

Even though they had started conditioning back around January, the season didn’t officially start until March 6th of this year. That left them roughly a month to prepare for their first meet, a tri-meet, which was on April 5th and was held at home. This was technically, originally their third scheduled meet, but the other two had to be canceled due to weather. According to Sydney Miller (18’) their first meet “Went really well. We did very well, especially those who were running their first race of the season.”

The team’s next meet was held at Newark Catholic on April 7th. The following schools attended: Johnstown, Utica, Lakewood, Licking Heights, and of course Newark Catholic as well as our own team.

Of course, the majority of the track team participates in running events, with about a fourth of the team participating in field events that are offered.

As of now there have been a few minor injuries. Track athletes say there are typically around 20 students that get some kind of injury during the track whole season. One of the most common injuries are shin splints due to all the impact on legs during practices and meets.

There are a lot of aspects that go into getting ready for a track meet. There are typically two meets a week. Leading up to the meet there are hard days where they work more intensely and “easy days” according to Miller (18’) where they work on practicing relay handoffs, field events, blocks and just running in general to prepare for the days ahead.

As far as goals pertaining the 2017-2018 track season, the most predominant one would happen to be wanting to beat Johnstown at every meet and to have more people make it to states, as well as performing well at the league meet.

Although it is just one big team, track happens to be one of the more individual sports. Yes, there are relay events that need at least four people, but other than that everyone is working on competing for themselves on a personal level: setting goals, accomplishing those goals, and striving to be a better athlete.

Gabby Webb (19’) believes “The rest of the reason will go very well,especially for the girls team because we are almost at the same spot we were at last year given the timeline. I just think we are just going to get better from here.”

- Mercedes Keim (‘18) is a staff writer for The Viking Vault 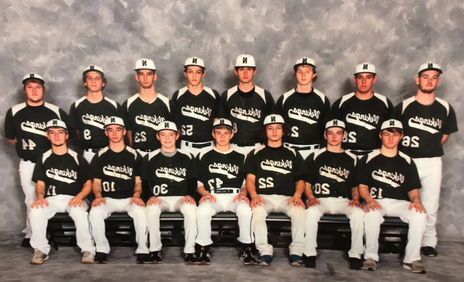 The baseball team has been off to a hot start to the new season as they are undefeated after the first five games of the year.
The Vikings baseball team is off to a 5-0 start and 2-0 in league play. A strength of the team this year is experience and senior leadership. Junior Carter Comisford, a three-year letterman, said, “I think that the biggest strength has been the experience that we returned from last year, as we have only needed a few younger guys to step into bigger roles.”

A focal point for the Vikings has been pitching. They knew that a big part in having a successful season would be pitching, and so far, the pitchers of the team have accepted the challenge and pitched great up to this point in the season. New to varsity, sophomore Alex Hook confirmed, “The biggest strength of the team has been pitching. We have only allowed six runs in the last three games. If our pitchers can do that all season, then we will be a very great baseball team.”

The team knows this season is a work in progress, and even though they have had a great start to the season, they know they still have to work on limiting mistakes in games.  They know that their best baseball needs to come at tournament time. Comisford said, “We’re still working out some kinks early in the season, but we have looked promising so far.”

The Vikings have set a very high goal for the season. They have their minds set on winning the school’s first Licking County League (LCL) title in baseball. They see the amount of leadership on the team, and they know they have the ability to make a run. Hook said, “I would believe that we can make a deep tournament run, considering we are returning many varsity starters from last year's team.”

The team knows that they have a tough road ahead of them to win a league title because the LCL is very competitive this year. The small division of the LCL is loaded with good baseball teams, but there is one team Northridge is eyeing as their toughest opponent. Talking about the toughest team in the conference, Comisford said, “I think that Heath poses the biggest threat because of their returning upperclassmen. They didn’t lose a whole lot from last year, so they should be pretty tough.”

The team still has a long season ahead of them, but they have high hopes of having a successful season this year.

- Jackson Wilson ('19) is the Sports Editor for The Viking Vault. 19jwilson@northridgevikings.org 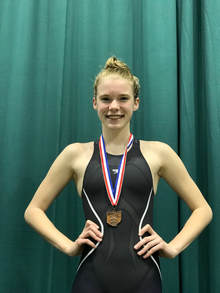 Riley Bunstine ('20), featured here at Districts, went on to swim at State. Courtesy photo.
Powered by