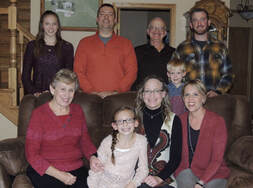 Sydney Koker and her family on Thanksgiving … minus any flames. Photo by Sydney Koker.
Turkey is more Dangerous than you Thought
By Ali Zigo
NORTHRIDGE - As Thanksgiving approaches, you never would have known that the Uncle causes the most trouble during these family get togethers. Many students have had wild Thanksgiving experiences with crazy stories to tell.

Sydney Koker (‘21) has more of a dangerous Thanksgiving story from a few years ago. Koker’s uncle had deep fried turkey for this Thanksgiving. As the family was inside enjoying the turkey, out of the corner of Koker’s eye, she noticed out the window that the fryer had caught on fire. Koker jumped up and yelled “fire”! Koker’s uncle soon came to realize that he had left the fryer on so he rushed out with the fire extinguisher and put the fire out.

Jake Reese (‘20) has multiple Thanksgiving stories to tell. Reese’s family was all sitting around the dining table on Thanksgiving when his grandpa started to choke on a turkey leg. Reese’s uncle then got behind his grandpa and started giving him the Heimlich Maneuver until Reese’s grandpa was finally okay. In this case, the uncle actually saved the day.

The second story Reese has to tell is a different year, same house. Reese’s family was once again all around the dining table saying grace when a “random guy walked in.” He said the man had “come into the wrong house.”
According to Reese, the man then said “Oh shoot, sorry!” and then walked back out.

Clayton Laslo (‘21) has two Thanksgiving stories to share, as well, both stories involving the same uncle. Laslo’s whole family was playing a game of backyard football. While Laslo’s uncle was running to get the ball, he “ran straight into the clothes line and fell over.” When Laslo’s uncle got back up, he came to the realization that both of his two front teeth had been knocked out. Laslo explains that his uncle then “had to get false teeth.”

On another Laslo Thanksgiving, it was the same scenario: another annual game of backyard football. The same uncle, too. As this uncle ran to try and catch the ball, he failed to notice that there was a fence right in front of him. This was a “subdivision yard.” The “uncle ran into the fence and the whole fence row was completely knocked over onto the neighbor’s lawn.” Thankfully this time, Laslo’s uncle didn’t get any teeth knocked out. Laslo’s family then all helped to put the fence back up.

There are many stories to tell from each family on Thanksgiving about years past and exciting memories to share.
Happy Thanksgiving!