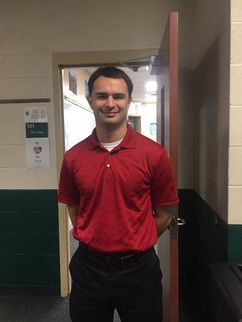 Mr.Flick before one of his math classes. Photo by Aili Barbee ('16)
Math department welcomes new teacher
By: Aili Barbee

NORTHRIDGE- Northridge hired first year teacher, Cory Flick, to be the new Algebra and Calculus teacher for the 2015-2016 school year, following the resignation of math teacher Shaun Boening, who accepted a position at Westerville Schools.

Flick is teaching Algebra I, Calculus I, and Calculus II this year. Calculus I was originally a basic calculus class at Northridge, but this year Flick will be teaching it as an Advanced Placement Calculus AB course, which means Calculus II will be taught as a more advanced Calculus BC course.

“He seems pretty promising as a math teacher,” said Adam Eckstein (’16) who is currently taking Flick’s Calculus II class. “You can really tell that he loves the subject, and that makes me feel more comfortable when he teaches.”

Flick attended Wright State University where he received a bachelor’s degree in Math and his Master’s in Education. He then taught as a student teacher in an AP Calculus class last year at Dublin High School.

Flick’s favorite hobby is rollercoaster riding. “I’ve been on over 203 different roller coaster,” Flick boasted. His favorite coaster is the Fury 325 in Charlotte, North Carolina. “I love the thrill of trying out a new coaster,” he said.

Flick also really enjoys bowling. He was on the bowling team in high school and has bowled eight perfect games total.

When asked what a weird fact about him is Flick cracked that he “competed in a championship for the math game, 24, when he was in fifth grade. “

Flick’s favorite thing about Northridge so far is the closeness and feel of community “because it’s so small.”

“He seems to bring in a lot of math experience,” says Josie Bunstine (’16). “I know we’ll be ready for the AP test come this spring.” 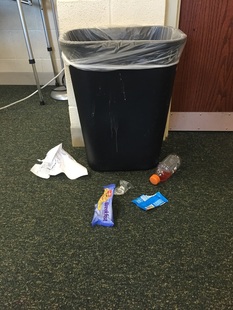 An example of something that just bugs our custodians while they’re hard at work. Photo taken by Jamie Swickard (‘16).
Custodians reveal pet peeves
#JANITORPROBS
By: Jamie Swickard

NORTHRIDGE- Here at Northridge we’re known for our nice, clean facilities, but do you ever wonder what some of us do to make it harder on the maintenance staff to do their already demanding job?

After every day, the maintenance staff goes through to clean up the classrooms for the next day. However, sometimes there are things they wish would have been cleaned up in order to make their jobs easier. Keith Stought, a maintenance staff member said, “It would make everything easier if teachers would have their students clean up the big trash at the end of the day that are under the desk.”

Cleaning up big trash isn’t the only thing that bothers our maintenance staff. Tom Dauer, the afternoon custodian, said cleaning up desk art is the most bothersome thing about his job.

“I just wish students didn’t write on the desks and instead doodled on their papers,” Dauer said.

Another thing that can wear on the maintenance staff is team meals. Dauer said, “I wish we had a restaurant here for the teams to eat in on game day because I feel like there is always food laying around somewhere from a team meal that didn’t get cleaned up.”

The little things the maintenance staff wishes students wouldn’t do isn’t just restricted inside the building. Stought, who heads up buildings and grounds for the main campus, said sometimes after school or after tailgates, bottles or food wrappers will be in the parking lot. He said it’s the little things like that he wishes the students would help them with so they are better able to focus on bigger projects to better the school.

The last big problem our maintenance staff has to face outside are students driving up to the soccer field for practices. Stought said, “It’s more of a safety issue than anything. Students are walking back and forth on the path to the field, and sometimes the drivers can get distracted.”

After seeing some of the things we do to cause the maintenance staff headaches, you may ask “What can I do to help make their job a little easier?”

Tommy said students can help by not staying around the school unless you have to for an extracurricular activity. He stated that sometimes it’s hard to get a job done if there are still quite a few people at the school.

Another way to help out the maintenance staff is by picking up trash anywhere you see it, even if it’s not yours.

Nevertheless, our maintenance staff realizes what comes along with their job. Stought said, “Cleaning up the little things is ultimately just a part of the job. If there weren’t ever messes or handy work to be done, we wouldn’t have jobs.” 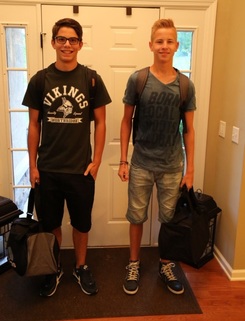 Stalder (left) and Lund (right) in the host house before they leave for a day at school. Photo by James Poole.
Straight outta Europe
By: Megan Dalton

NORTHRIDGE –  Two foreign exchange students are attending NHS for the entire 2015-16 school year. Sven Stalder is a sophomore from Zurich, Switzerland, and Jesper Lund is a junior from Copenhagen, Denmark.

Stalder traveled 34 hours by plane with layovers to arrive to his new home in Johnstown. Lund traveled 24 hours to his new "home," which he is actually living in with Stader. Both foreign exchange students had parties with their loved ones before they had to give an emotional farewell. Even though it would be a big change for them they were both, "excited for the new experience." America is much larger than either of their home countries, so the say they were ready for anything that will come from their year abroad.

The boys have both decided to join the Cross Country team to get to know some of their new classmates better. Lund and Stalder both enjoy being a part of the team and getting to run races with their teammates. Stalder says, "the people here are very friendly and accepting, and that has made the transition to a new country very easy." It was on the way to a XC meet that they first got to see a school bus in person and not in movies. The comfort of the seats when they got in, however, lowered their excitement.

When asked what shocked them most about America, Lund said, "the people here are so friendly and accepting, it's a nice feeling that they are so interested in me and where I'm from." Stalder claims the people here in America are not as modest and humble as back home. "People here talk very opening about money and the things they have, and that's just not something we do from where I'm from. We also are more eco friendly," Stalder continues.

This is not Lund's first trip to the States. He says the coolest things he has seen in America is the Grand Canyon and Cedar Point. Lund and Stalder enjoy going to Cedar Point with their host parents many weekends and staying on a boat they have there at the lake.

The coolest thing Stalder has experienced in America? The many Oreo flavors. "There are so many different flavors here in America! In Switzerland all we have is the original kind. I'm a self-diagnosed Oreo addict," he explains.

The foreign exchange students both say what they miss most about home is their family and their friends. Along with that, Lund misses his "fat cat" and Danish food. Stalder misses how healthy his food from home is, as well as the public transportation he used in Zurich. They occasionally talk to their friends and families back home, but they are trying to get the "American experience" so they are trying to not cling on to home.

When they both head home on July 8,2016 they plan to be greeted at the airport by the friends and family they left behind. They look forward to being back home but they are going to make the most of their time here in America.