NORTHRIDGE- With fall sports ending, winter sports are beginning, and the teams are preparing for their upcoming season. The boys and girls basketball teams are two of the winter sports who are looking forward to winter.

For the girls upcoming season, there are only a couple of new changes says Head Coach Chad Scott. For this season there has been an addition to the coaching staff: Kevin Smith will be coaching the junior varsity team. Scott says, “Coach Smith has experience at the middle school and junior varsity level, and I believe he will be a great addition to the staff.”

For the 2017-2018 season, there are 31 girls signed up to tryout for the team, which includes: twelve freshmen, seven sophomores, ten juniors, and two seniors. Junior Caroline Liggett says, “I am very excited to take on the season, and I can’t wait to get back on the court.” Due to the increase of numbers within the girls program, there will be a freshman team who will receive around eight games as of now. This will be the first Northridge girls freshman team in around ten years, and Scott is pleased with the rise of the interest level within the program.

With the upcoming season, Scott is excited because this is one season where all girls are coming in healthy, and there are no injured players going into the season. Scott says, “We are going into season with a core group of juniors and seniors. They have had their learning years and this season they are able to put their talent out there.” Junior Hunter Henson is excited for the season, saying, “We’re gonna get the dubs and eat the cereal.”

This season, Scott hopes to be competitive in the Licking County League, and not to be just in the games, but to win games that have not been won in the past. Scott remarks, “I am always hoping to improve, but I also want to make a mark in the LCL.” Coach Scott is excited about this season and says, “It feels as if we are building a program and that is a great thing to see.”

The girls kick off their season on November 27th, at River View High School.

As for the upcoming boys season, they will be led by varsity coaches Brian Blume and Rob Chambers, junior varsity will be Chad Elliott, and the freshmen will be coached by Tyler Estep.

This season there will be around 25 boys trying out for the program, and Blume expects all teams to be very competitive this year. Coach Blume this season hopes to develop team chemistry, especially at the varsity level with the amount of inexperienced players. Along with team chemistry, Blume is hoping to work and improve the individual skills of all and make progress as the season continues. Senior Jeremy Butt says, “I have a feeling that we will have a great season this year.”

The 2017-2018 season for the boys starts on December 1st, as they take on Cardington High School. 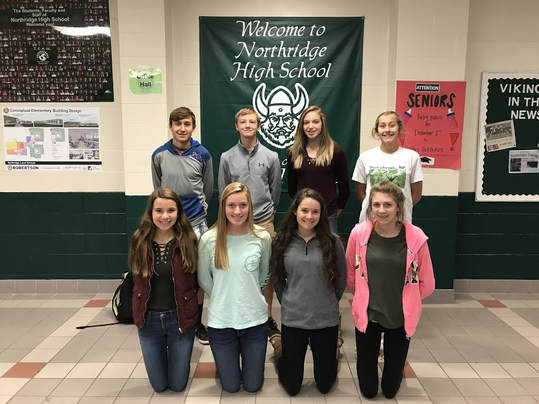 Northridge athletes given LCL awards.
Fall sports improved records
By: Olivia Humes
​
NORTHRIDGE- The volleyball, football, soccer, golf  and cross country teams have improved their overall records this 2017 season. There have been many athletes who earned district and league awards for their sports.

Freshman Ross Teeter was awarded first-team all LCL for the golf team.

Junior Alex Rosshirt says, “This golf season was pretty good, and we’re all proud of Ross for getting an LCL award."

Last year, the varsity volleyball team’s record was 0-16 in the league, and 0-20 overall. However, their record has improved this year to 2-11 in the Licking County League, and 7-16 overall.

Senior varsity volleyball player Kerrington Mintier says, “Our team is so much better this year all around because we all know our roles on the court. I am really happy with how my senior season went with the team.”

Freshman Sydney Koker, and Juniors Olivia Humes and Olivia Shank both won awards from the Licking County League (LCL) for the volleyball team. Koker earned first-team all LCL, Humes was awarded second-team all LCL, and Shank was honorable mention all LCL. Along with league awards, Koker was named second-team for the district, and Shank was named honorable mention for the district.

Varsity athlete and Sophomore Cole Fox explains, “I think we competed in a lot of games that we didn’t last year, and there’s always room for improvement. Overall, the season went pretty well, and I’m happy with it.”

Yet another sport with an improved record this fall sports season is the girls varsity cross country team. For the first time in school history, the girls cross country team, consisting of Junior Megan King, Freshman Olyvia Ashbrook, Sophomore Shelby Yorde, Junior Katrina Tennis-Malick, Freshman Megan Miller, Senior Christina Kiser, and Sophomore Riley Bunstine has moved beyond the Central District Championships, where they placed third, and on to Regional Finals.

The Girls Cross Country team placed thirteenth at regionals, and King will compete in states this Saturday. Along with competing at states, King will also earn Academic All-Ohio recognition.

When asked about the season, Coach Garee says, “We have a lot of young talent and we finally have some depth on our roster. That means we can make meaningful decisions about varsity competition, and we’ve got both girls and boys competing for fastest times amongst one another. That’s what makes this sport so great. They’re out for their own best times, but they don’t lose sight of the fact they’re a team and they’re advancing together. The extremely talented girls team will mostly be back next year which is also a good thing.”

-Olivia Humes is the Jr. Web Editor and Sports Editor for the Viking Vault.
Swim team ready for the season
By: Katelyn Darby
​
NORTHRIDGE- Hopes are set on one of the best seasons yet for the Northridge swim team. Coming out of a record-breaking season, expectations are set for an even better year with excitement from both coaches and swimmers for the start of practices.

Last season ended with nine new records and the biggest qualifying districts team the program has ever seen, and Coach Rachel Furr expects the upcoming season to be no less successful. “I anticipate many more records to fall over the next few months,” she says. Furr hopes this year the team chemistry will grow stronger and the team will exemplify teamwork and sportsmanship to help reach their goals as a team. Senior Alex Rahde says her favorite part about swimming is how close the team is. “We are all friends, and that helps us to reach goals because of our support for each other. I know this year we will only become closer,” Rahde says.

Returning to the team for her second year, Junior Audrey Holt says, “I’m excited to get back to the pool and have fun with the team.”

Furr is also excited to get back to the pool, and is already making plans to figure out what everyone's goals are and help create the perfect path for them to achieve their goals. “The best, most exciting, part about coaching this team is seeing them succeed individually and collectively.”

The team is expected to be bigger than ever, with the majority of the team returning, and is also growing as a program, hosting four home meets at the New Albany Natatorium as opposed to the usual two. The added meets will serve as a fundraiser for the team and will give the team extra opportunities to swim in their home pool. Northridge will also be returning for the third year as the host of the Licking County League meet held at the New Albany pool. As for training, there won’t be many changes, Furr mentions. “We are always changing and evolving as a team, with new teammates and different practice strategies, but we will continue what worked so well for us last year and hopefully see continued success.”

Sophomore Riley Bunstine agrees, “I love the seniors. I’m so excited to start the season and know this will be the best year yet.”

Overall, both the team and Furr are ready for the start of the season. Furr says, “I'm so proud of their achievements so far and am always most excited about the success that a new season will bring!”

NORTHRIDGE- The list of school-sponsored winter sports just got a bit longer. Starting this season, bowling will be offered as a school sport.

Bowling has been a club sport at Northridge since the 2015-2016 season. It is coached by Mike and Shanell Pankuch. The team practices at Redskin Lanes in Utica and has matches in Utica, Newark, and Lakewood.

The difference between a club sport and a school sport, according to Athletic Director Justin Grieger, is a club sport does not receive funding or transportation to games from the school.

“The decision [to make bowling a school sport] was mutual between myself, the coaches, and Mrs. Anderson,” says Grieger, who adds, “Bowling has been a club sport for three years, and it’s protocol to make the transition to school sport after three years of being a club sport.”

Being a school sport means that the team will receive funding from the school, busing to matches, and, “Hopefully an increase in participation since it will be less expensive to play,” says Grieger. Students will also be able to earn varsity letters for their participation and physical education credits.

That, however, is the only difference. “We will be bowling the same schools and have a similar schedule,” says Coach Mike Pankuch.

Jacob Feightner, (‘18) says, “I am very excited that it is considered a school sport.”

Others don’t share the enthusiasm about the new “official” designation. Alayna Curran (‘19), a second year member of the team, says, “In all honesty, I don't know if it'll make a difference to me. I liked bowling before, and I'm sure I'll still like it.”

Feightner adds, “I don't imagine much will change. We will still go about our business with practicing and competing like we always have.”

“Our ultimate goal with the bowling team is to make separate teams for girls and boys,” Grieger says. Coach Pankuch agrees. “This will open up more opportunities for wins and for individual successes,” he says.

Pankuch wants everyone to know, “Most importantly, we want anyone who thought they couldn't be in a team sport to know they can, and bowling is for you!“

-Katie Applequist (‘18) is a second-year member of the Viking Vault and is Entertainment Editor.
Powered by