NORTHRIDGE –  Northridge FFA has come a long way since its first year of operation. Members say Northridge’s chapter has been forged by a school and community that supports it all the way.

Over the summer, the FFA went to two parades with a home-fashioned float that flew the international blue and corn gold banner. The first parade was in Pataskala, the second at the Millersport Sweet Corn festival.  The biggest membership turnout was for the FFA float at the Homecoming Parade, though.

“FFA has definitely made a comeback. This is a good group,” said last year’s president Ashley Parker.

Fall brings with it another aspect of FFA, the fall C.D.E.s (Career Development Events).  These events range from soil judgings to job interviews and many more.  Practices are held in Mr. Weiss’s room.  Most of these CDE's are judged by others, but some require students to do the judging.

One CDE, for example, is the dairy cattle judging.  The idea seems simple, but it is actually extremely challenging.  The contest is held in an arena, and they have a spot set up for the crowd to walk around.  This C.D.E. has two parts, dairy handling and dairy judging.  The handlers are judged on the control of a cow they haven’t led before, as well as for their ability to optimize the show quality of the cow to the judges of the animal.  The other part to this is dairy judging, requiring people to fill out questionnaires about their appearance, milk production, meat quality, stance, well-being, etc… all these things can be determined by physical attributes or clues as the cattle walk by.

Meanwhile, the Oct. 22 meeting will feature a costume contest for Halloween. The annual fruit sale fundraiser begins Oct. 15. The FFA National Convention is coming up at the end of October in Lousville, Kentucky.

NORTHRIDGE – For the past couple years, Northridge and Johnstown have done a joint food drive to help families in need, and 2015 proved to be one of the most successful years for the food drive since it began.

The collection was held from October 5th to the 9th. Students could bring in any type of non-perishable food or money. Each first period class competed against each other too see who could bring in the most. Mrs. Hotchkiss's first period English class came in first this time and won breakfast.

Individual students competed with one another for prizes, as well. Ashley Wood (‘16) came in first place, bringing in a total of 263 cans, which earned her a $25 gift card to Kroger. Kayley Thorp (‘19) was the runner-up, winning a $20 Route 62 BBQ gift card. Emma Scritchfield (‘18) got third place, earning herself a $10 Whit’s gift card.

​Megan Phillips (‘16) who donated a couple dollars, said “I love helping people in need. It just makes me feel so happy. The food drive is a great way to help people without going too far out of your way.”

Northridge and Johnstown team up for this food drive each year but compete to see who will gather the most cans. Northridge raised a total of 3,700 cans for the people in need. As of this newspaper issue, Johnstown hasn’t reported how many cans they collected.

The student leadership also made a video to raise awareness and hype for the food drive. It features a couple students, the Viking mascot, and an evil Johnnie. The video is available below.

All the proceeds go to the Northridge-Johnstown Food Pantry, which is housed at the Johnstown Independent Baptist Church. It first opened its doors over 25 years ago. Although the pantry is small and not very well known, it manages to raise plenty of food and help tons of families in need throughout the local area. It receives no government support and is entirely supported by the community and the Johnstown-Northridge school district. This food drive is one of the biggest fundraising events for the pantry.

NORTHRIDGE – Student Leadership recently hosted a flag football tournament for the purpose of raising money for the annual food drive.

The tournament took place on September 28th and consisted of six teams with a single elimination bracket. Students were on an early release schedule and were out on the field from 11-12. Five-member teams played in the tournament; those that didn’t feel like playing had the choice of either watching the game for two dollars or sitting in study hall.

It took a decent amount of time to get everyone out into the stands, so that gave players plenty of time to practice before the start. At the start, games were only a couple minutes long, except for the championship which was longer.  The final two teams went by the names of “Dream Team of 2016”, along with “No fly zone.” After a tough game, Dream team of 2016 won; that team consisted of Kylor Kauhi, Skyler Pritts, Noah Anderson, Noah Tornes, Nathan Hiser, Peyton Miller, and Chris George. For winning, they received a trophy that was engraved with their names.

Student Spencer Miller (‘16) said “Even though we didn't win, it was tons of fun. We practiced the day before, and then only lost by a touchdown to the winning team so I would say that's pretty good. I would definitely play again if I could.”

Student Joel Hale (‘15) also said that “I was skeptical of playing at first, but I'm glad I went out and go involved.

At the half time of the game, there was a hot dog eating contest. Entrance to the contest was free, and contestants were randomly selected from each grade. They were given unlimited hot dogs and one glass of water. Various methods were displayed to try to win, such as putting the bread into the water or smashing it. In the end, Jake Feyh (‘18) ended up winning.

NORTHRIDGE- The Marching Band qualified for State competition on Oct. 10 in Maysville. This is the third year in a row the band has made it to state competition.

The band brought home awards for best auxiliary, percussion and band in their class. Overall, they placed second against a total of nine other bands. Eight of those band were in the class above them.

The band is lead by Director Tyler King with the help of Percussion instructor Thomas Hall and Guard instructor Emily Jones. They are lead onto the field for each show by Field Commander Marie Severns.

The band over the past two years have qualified for states, their first time in 2013 with their Dare to Dream show. They qualified again last year as well with their This is the Army show. This year’s show is American Pastime and features songs like “Field of Dreams” and “Take Me Out to the Ballgame.”

“I really love our music program in our school. I know that a lot of people joke around about Northridge, but there are a lot of fantastic things about this school. Our band has worked really hard and all this hard work has really paid off in a fantastic way. I know I can’t wait to represent our school at State Finals,” said Eli Rushmore (’17).

The band has two more competitions before state finals, where they hope to continue to qualify and win more awards in their class. The dates for state finals are yet to be announced.

“We hope to have several people come and support our band at states,” Carrisa Sweetman said.

The band continues to practice in order to get their “one” rating at states. Watch the band at any of the football games to get a taste of their show.

“Our band continues to grow and become something that the school can be proud of being represented with the band. We are always looking for more people to join the program and make us an even greater force out against other bands. Our band couldn’t be any happier with where they are right now and can’t wait to see what future endeavors will bring us,” said Colin Evans (’18).

-Alex Healey (’17) is a band member and Journalism student at NHS. 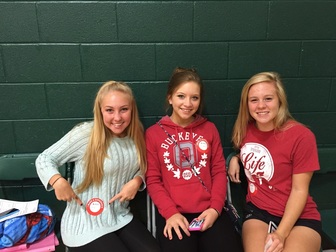 Left to Right: Leyna Varney ('16), Morgan Hatten ('16), and Josie Bunstine ('16) all sit together while waiting to donate blood. Photo by Aili Barbee.
Students give blood in hope of changing lives
By: Aili Barbee

NORTHRIDGE- Students donated a total of 44 pints of blood at the Oct. 5, tri-annual blood drive.

The blood drive is held in the high school’s gymnasium. Students sign up to donate at a certain time a week before the drive, and then are called down to the gymnasium by National Honor Society members. The students then sign in, read a quick pamphlet on donating blood, and then get asked a series of questions to make sure they qualify as a donor.

Josie Bunstine (‘16), while waiting to give blood, stated that she “was kind of nervous to donate because she did not feel well last time that she donated.” She ended up having no difficulties during her donation and smiled that “it is all for a good cause.”

After being approved, the students lie down on a gurney-type table, and have a qualified Red Cross nurse draw their blood. Haley Trimble (‘16) had no problems donating blood. “I like giving blood to the Red Cross,” she said. “I like knowing that I’m making a difference.”
​
Several people were turned away this year when they tried to donate blood. They had a mixture of complications including low iron levels, low weight, high body temperatures, and forbidden medication use. Trisha McConnell (‘16) donated double red last year and hoped to do the same again. “I’m not allowed to donate at all today because my iron levels are too low,” she said. “It stinks because I really wanted to donate, but there is always next time.”

Many students attempted to donate, but only 41 were able to after being denied donor eligibility for various reasons, causing Northridge to narrowly miss the goal of 44 donors. National Honor Society Advisor, Elizabeth Miller, urges students for the next blood drive to “Make sure to eat food containing a lot of iron so that we can have more donations.”

Northridge’s next blood drive is scheduled for this upcoming winter. “Everyone who can donate should come on out next blood drive!” stated Miller.
​
​-​Aili Barbee is a third-year Vault staff member and the Print Editor-in-Chief. 16abarbee@northridgevikings.org 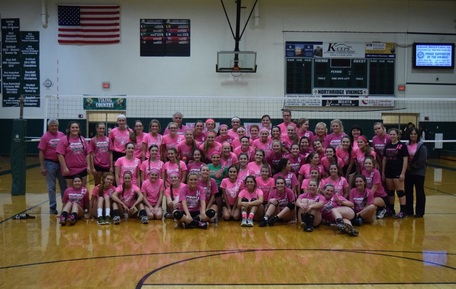 Both school's teams pose together at the end of the night wearing their pink uniforms to support breast cancer awareness. Photo by Tonya Orahood.
Volley for the Cure
By: Savannah Legg

The Vikings gave their all toward the fight against bright cancer in October. The annual Volley for the Cure game was held on October 13th at Northridge High School where the freshman, J.V, and varsity team played Newark Catholic.

Although the event was a success, the Vikings were beat in three games by Newark Catholic.
Lexi Hart (18’) sophomore on the Vikings team said “Although they beat us, they gave us a lot to work on for when we play them again in the tournament."

To raise money for awareness and research, baskets were donated by companies and parents and were silently auctioned. Baked goods were also sold for the event. Last year the event raised $700, and this year money raised by all the events of the evening totaled $2651.25. Chris Spielman will match dollar for dollar all donations made for the month of October, which will make Northridge's donation $5,302.50.

Prior to the start of the varsity game those who have lost the battle to breast cancer in the community were recognized as well as those still fighting the disease.
​
Tonya Orahood, organizer for the event, reflected on the night by saying “Great job, ladies! So thankful for all of the help from the local businesses, parents, coaches, and players! ”

-Savannah Legg ('16) is a third-year Vault staff member and the Photos Editor. 16slegg@northridgevikings.org
Powered by