NORTHRIDGE-Winter is here. For some students that means cold miserable weather, but others just can’t wait to go skiing and snowboarding.

NHS's Ski Club begins the day Snow Trails opens and ends when they close. In the past, they have opened as early as Thanksgiving. The club makes six trips beginning on the first Sunday in January. Members get on the bus by 1:15 and return around 9:45 p.m.

Snow Trails resort has plenty of skiing terrain, with a nice lodge and a new rental center. There is food available all day, but the ski club has a potluck in the afternoon.

Member Hugh Prentice says he does Ski Club “because its fun, you’re always with your friends, and get to go extreme." Many other members say that they do ski club because it is a good hobby and it’s fun to hang out with friends.

Prices to join range from $150 to $380. There are different programs available. To those that don’t have a ski or snowboard, Snow Trails has rentals available for skis and snowboards. For those that have no experience in skiing or snowboarding, Snow Trails offers lessons. Transportation is provided by a very nice Muskingum coach bus. It is $90 to ride the bus.

The advisor of the ski club is Laura Shenberger, and she can be reached at 740-627-0388. Ski club packets are available in the High School office. While it may be a bit late for this season, information is certainly available for next year.

Kyle Stermer is a sophomore reporter for the Vike Vault. 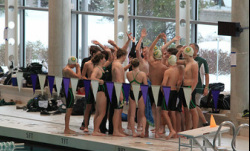 NORTHRIDGE- Viking swimmers have swam through their season with 17 people. The team has a total of three girls this year and includes five seniors: Riley Love, Katie Pileski, Nathan Castle, Ryan Strong, and Brandon Eckstein. Juniors are the majority of the team, and they include the following: Mat Scott, Jason Dean, Chris Lindsey, Steven Wickaham, Bryce Curtis, Paul Haught, Nick Willeke, and Mason Alexander. There are only three sophomores: David Stanton, Adam Eckstein, and Josie Bunstine. The only freshman is Eli Rushmore.

This year the team is coached by head coach Rachel Furr, and the assistant coach is coach Jeff Lindsay. The Vikng swimmers practice Monday through Friday two hours a day at Denison. Two days out of the week they come to the school and lift weights for an hour.

"Rachel swam in high school and OSU club, so she knows what she is doing and she does a very good job at pushing us to be better" say both Scott and Love.

Head coach Furr writes the workouts while assistant coach Lindsey is the behind the scenes and connections person. Last year he was able to get a sponsor that paid for their busing to and from practice everyday.

Love ('14) is one of the seniors on the team. She swims because "it's a sport that you actually have work at." She also said "it's easier than most land sports because of it being in the water. Love has been swimming since 7th grade. She has participated in both club and high school in her swimming career. She decided not to do club this year to focus more on the team. Love broke the school record of the 500 free (which was set at 6 minutes, 11 seconds). She broke it at 6 minutes, 2 seconds.

Mat Scott ('15) is one of the many juniors on the team. He has been swimming since 7th grade and enjoys it because it's a individual sport. "You are as strong as yourself, and you only have to worry about yourself unlike, on a team sport where you have to rely on someone else."

This year the team has six team captains: Love, Pileski, B. Eckstein, Scott, Lindsey, and Haught.

"Meets are like a track meet but inside with water" says Scott. Each event at a meet is broken down into heats, from people with slower times to people with faster times. The meet has a total of 11 events. The girls go first (odd-numbered events) and the boys follow (even-numbered events).

Even though the team is smaller than at most schools they have been placing very well against the bigger schools and teams.

The team will be participating in the sectional meet Febuary 8th at Columbus Acadamy and then the district meet is Febuary 14th at OSU.

Gabrielle Evans is one of the Sports and Extras editor for The Viking Vault.

With school only providing soccer in the fall there is usually a lull in-between seasons, unless you join an indoor team or play for a club in the spring that also has an indoor team. Indoor soccer could be considered much more exciting than outdoor because it is played in a hockey rink with AstroTurf. With walls surrounding the field, many neat and outside-the-box plays can develop by using the wall to your advantage. Along with body checking into the walls, smaller playing field, smaller goals, and being faster paced and more free form it can be very exciting to watch.

Northridge students Connor Wood, Tyler Miller, and Michael Travis have joined an indoor league and created a team with players from Johnstown in order to stay in shape for their club teams this upcoming spring. The team plays at the Sports Barn in Easton, and there are 7-8 players on their team, with a few coming and going. For Connor and Tyler’s club team in the spring they will train indoors with the team in Zanesville and the team will play through spring into early summer.


Trevor “the truth” White is the reviews editior for the Viking Vault.

NORTHRIDGE- The Northridge wrestling team had one of their best seasons last year, but this is a new year and a new wrestling team with plenty of potential.

The team competed in the Maumee Bay Tournament on the 17th and 18th of January. As a team, they placed in the low 20’s out of 32 teams and individually Robby Mickey and Jake Adkins are the only ones that placed. Jake got 6th, and Robby took home 5th.

Robby Mickey, senior wrestler says “We are doing okay for the start of the season, we have a long way to go but I think our season will turn out great.”

On Wednesday, January 22nd, the team had their first round of team state duels. The team won their first match 30 to 24 against Waterfall but then lost in the next round to Utica. Individually they won 6 out of their 8 matches, but Jake Adkins says “We lost mostly by forfeits.”

Now the team is looking forward to the LCL league meet.

Morgan Wright is a senior reporter for The Viking Vault.
Powered by