The team has been working on their mileage since June and has noticed “beautiful improvement” from last year, according to Riley Bunstine (‘20). Megan King leads the team, taking first in several races, with everyone else coming in close behind. Last year, she competed at State Finals. The Girls Cross Country team has medaled at every cross country meet this season.

Last year wasn’t quite as serious as this year, but “You can see that all the girls want to compete and want to get better, so when one girls begins pulling ahead, everyone else speeds up. We push each other. We want to place as a team, we want to go far. And I think we can,” said King (19’).

Runners say all the girls are very open with each other, including the coaches. They are a tight knit group and build off of each other. “Everyone has a lot of fun and the coaches make sure everyone can reach their full potential. Practices are really fun because we all get along really well and help each other through hardships. I think Cross Country is a good sport for beginners because everyone is so nice and it’s easy to catch on” said Riley Bunstine (‘20).

“In your team, you want everyone to succeed. You will help them. It is just a big family. Like, from other teams, you want to beat them so badly, but at the end of the race everyone is so nice. The top finishers will literally carry you to a seat when you finish your race,” King explains.

Every member of the team adds their own spark to the group. Coach Garee laughs as she recalls “the moment she knew Megan King was unique.”

“There was so much interesting vegetation alongside the river,” King said of the East Knox course at Kenyon College, immediately after she finished the race. “I wanted to go swimming in the creek and Bryan had to stop me.” Garee said she realized King was a budding scientist, as well as a strong runner.

Among some of the most interesting courses run was the National Trails raceway. King (‘19) remembers running it her sophomore year at States. “That was my least favorite. There are two giant bleachers full of people screaming, and their voices are muffled because of how many people there are. It’s mostly out in the open, only a spot of shade. Starting was weird. There weren’t bathrooms at the start, and there were so many teams, and the coaches couldn’t come into the boxes. It was very nerve wracking,” she says. “The worst part is it was so cold and there were no woods. The mile was coming right up to a hill and there was a bridge, so with spikes it was horrible.”

The girls team brought home their second first place trophy from the East Knox meet on Sept. 19. They plan to power through the rest of their season with the expectation that multiple runners can advance to post-season competition.

-Olivia Carpenter ('18) is a staff writer and the Photo Editor of The Viking Vault. 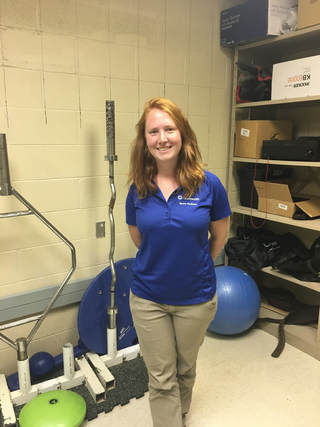 Reed attended Springfield High School in Akron, OH where she was involved in marching band, powerlifting, cross country, and track. Outside of school, Reed enjoyed kayaking, rollerblading, snowboarding and skiing. After graduation, Reed attended Kent State University in Kent, OH where she majored in Athletic Training. Once graduating college, Reed worked at a deli before moving to Colorado with her friend, where she then applied for an athletic training position. After spending time in Colorado, Reed moved back to Ohio so she could be closer to her family. Once she returned, Reed searched for an athletic trainer position and applied with Ohio Health, then working through Ohio Health she was placed here at Northridge.

When asked how she became interested in athletic training, Reed said, “I basically turned a hobby into a career.” As an athlete, Reed has broken bones in her body and suffered from numerous sprains, which she was then required to attend physical therapy. Reed’s passion for athletic training stemmed from all the time spent at her physical therapy appointments and the passion of her high school strength and conditioning coach. As Reed retained information from her physical therapy appointments, she would then apply what she had learned to her friends and teammates if they were in need of assistance due to an injury.

As an athletic trainer, Reed’s favorite part of her job is watching the progress of her patients. Reed says, “Having the ability to watch an athlete who was injured, work to improve their injury, and be able to get back out on the field is an indescribable feeling.” Along with watching the progress of her patients, Reed enjoys her job because she has the opportunity to spend most of her time outside at sporting events. With the positives of the job, also come the negatives. Two things that Reed does not enjoy about her job are calling 911 for an injured athlete and sending a patient to the hospital, but other than that, Reed loves all parts of her job.

When asked about any advice offered to students who are considering athletic training, Reed was full of information and pointers for students. Reed said, “Studying is the most important part. You must study constantly and not forget the information.” Reed mentioned she still studies even though she already has her degree because it is necessary to know all information related to her work.

Reed has enjoyed her experience at Northridge so far. She said, “I love Northridge, everyone has been extremely friendly and helpful.” Reed especially appreciates the coaches who look out for the safety of their athletes and make sure everyone is healthy.

Reed says her door is always open to any athlete who is in need of her assistance, and she can always be located in either her office, located in the weight room, or any sporting events at the school. ​

When asked what he is most excited for this season, Coach Carr responds, “New beginnings. I love that, since day one, everyone has been so welcoming and eager to play.”

Coach Carr has coached previous years at Lakewood High School and is transitioning into coaching at a new school. He explains, “One of the hardest parts about coaching at a new school is learning the strengths and weaknesses of each player. We want to make sure we are putting everyone in a position to be the most successful version of themselves.”

When asked about the differences over the years, Mandy Shults (‘19) says, “I think we have actually learned a lot more about the game of volleyball and how to be a team. We all have specific roles this year, and that’s the main difference between last year and this year.”

Shults also says that her first impression of the new coaches hasn’t changed, as she still thinks they are very knowledgeable about the game of volleyball.

When asked about the future of the volleyball program, Coach Carr says, “You can continue to see growth in our players. We want to continue to get stronger and faster physically, but really need to focus on growing our overall knowledge of the game and the speed in which we need to play.” He also says that coming into the summer he knew, “We needed to build the program. It starts with laying down the foundation and building up from there.”

Sophomore Claire Wasem says, “I think the new coaches have had an overall positive impact on the program. We have came together more as a team, and that has caused our record to improve.” Wasem also explains, “When I first met the coach, I was nervous about the season. However, he is very organized and I am very glad he decided to coach at Northridge.

The varsity volleyball team had their first Licking County League win in four years against Lakewood this season. When asked how that feels, Coach Carr explains, “There have been so many moments this season that are special, but getting our first LCL win was extra special.”

Sophomore Ali Zigo, a member of the junior varsity team says, “I’m really happy that Coach Sweet decided to coach this year, because she really knows what she is talking about, and she’s also really funny.” Overall, the players on the varsity, junior varsity, and freshman teams are happy with the new coaches, and the impact the coaches have had on the program. The program is continuing to build, and the new coaching staff is a big part of that. 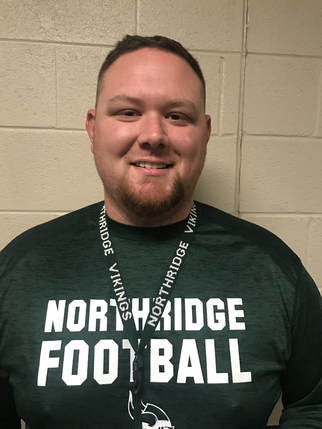 Friday night lights welcome new coach
By: Cora Dorman
NORTHRIDGE- A successful football season is underway, but that wouldn’t be possible without the hard work of the coaches. Jay Campbell is one of those hardworking coaches and he is the Varsity head football coach for the 2017 football season.

He plans to, “Continue to complete within the LCL and make sure our guys have a lot of fun playing football at Northridge.” With a 4-0 start to the season, Campbell also plans to, “Keep building on what we started with.”

Before applying for the job, Campbell mentions he had been around Northridge, where he got to know the students and staff well. He adds, “It seemed like a great place to be.” When applying for the job, he made an instant connection with Mr. Grieger and Ms. Anderson. The two were very supportive of the team and Campbell’s future plans.

Campbell appreciates the hard work put in by his players. He explained, saying, “We have kids that work really, really hard and that's all you can ask for as a coach.”

Sophomore running back and linebacker, Cole Fox (‘20) says, “He finds different ways to motivate us and push us to be our best.”

In addition to being the Varsity head coach, Campbell is teaching Special Education at Northridge. He mentions, “It’s a good staff to be around. The kids are awesome and respectful...I enjoy it a lot.”

He noted what a great staff the football team has and appreciates that there are other football coaches in the building. He says, “Being able to see the kids in the hall everyday and having a direct connection with the kids is important.”

Senior and N-UNIT student section leader, Addie Van Kirk says, “He is really nice and he even knows my name. I appreciate that he is always involved on Twitter through the N-UNIT page and retweets information.”

In his free time, Campbell enjoys fishing, cooking, barbecuing a lot and spending time with his wife, family and friends.

As advice to student athletes he believes you should, “Apply yourself to everything you do.”

Campbell will be coaching the Vikings at 7pm on:

Campbell says, “Come out and support the team!”