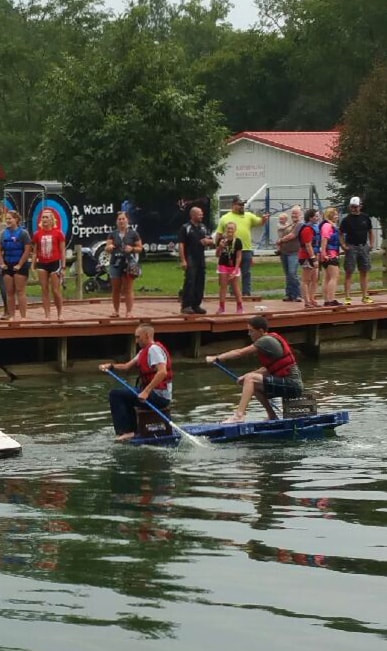 NORTHRIDGE- Future Farmers of America, or FFA, has been a big part of many student’s lives for nearly 100 years. One student, Stephen Padilla (’18), a senior in high school, is the president of the Northridge FFA. As the president, he gets to be one of the most involved and dedicated members.

FFA was established in 1928, as a way to keep the children of farmers in school, and to teach them how to operate their farms in a more efficient way. It teaches students many aspects of agriculture, farming, animals, nature and wildlife conservation, and other skills.

Padilla joined FFA in eighth grade, when he was thrown into the class like a lot of  kids are; but when asked why he stayed, he explains that “the hands on experience was really what kept me coming back, along with the social aspect.”

His freshman year, Padilla was asked if he wanted to be interviewed to become an officer, and he decided that was something he wanted to do. He ran, and was elected to be the treasurer. During his sophomore year he was elected the sentinel, which is the person in charge of public relations, and of communicating with the people of FFA.

As the current president, Padilla has many responsibilities like giving a speech to open meetings, running the meetings, signing off on decisions and paperwork, and being the head of the FFA leadership.

When asked what it’s like to be the president, Padilla explained that “There’s a lot of intimidation when it comes to being the president, but it is one of the best decisions I’ve made. It looks really good on applications for anything in the future, and you learn a lot of applicable skills. It’s just really fun.”

Trinity Orahood, a member of FFA, said that “Compared to some of the past presidents, Stephen is doing a pretty good job. He actually knows about FFA and how it works, and really knows what he is doing. He always does his job and works hard at it.”

When asked what his favorite parts of being in FFA was, he explained that “It is the Supervised Agricultural Experience (SAE) and the Career Development Event (CDE), which are career development events that teach you a lot of useful skills that can be used for the rest of your life.”

In these competitions, the students are given a topic to research and 30
minutes to prepare a speech. After the time is up, they give a five minute speech which is graded on the overall knowledge of the topic, speech patterns and fluidity, and nonverbal communication.

In February of 2017 he competed at the district level then moved on to states, where he placed seventh. In the 2018 district competition he placed fourth, and received a gold rating.

Padilla was also involved in Natural Resources Challenge in August of 2017. The challenge consisted of several events where different FFA chapters competed against each other.

One of the events, the recycling challenge, involved Padilla and three teammates having to row across the pond in a boat made completely of recycled material. With the help of Padilla, the Northridge FFA took first place in the challenge.

Padilla recommends joining FFA to anyone who enjoys nature and farming, fun trips, or friendly competition.

-Megan Smith (‘18) is a staff writer for The Viking Vault. 18msmith@northridgevikings.org 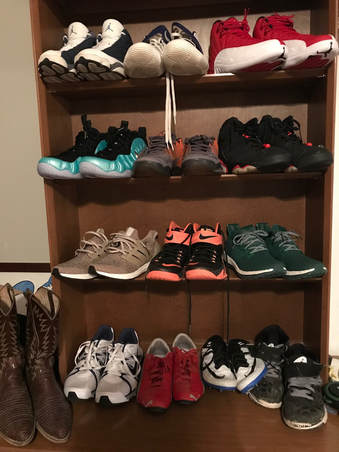 NORTHRIDGE- Girls have long held the reputation of being obsessed with their shoes and having a lot of pairs in their closets, but some boys of all ages lately have proven to be way more obsessed than girls were ever rumored to be.

The trend of having multiple “fancy” pairs of shoes (traditionally, tennis shoes/sneakers) seem to be starting in early middle school and is extending all the way up to high school seniors.

Northridge Middle schooler Carder Wasem (‘23) says he has around “14-ish pairs,” which makes it seem like he has so many he can’t even keep track! Another middle schooler Zach Holder(‘23) has exactly 15 pairs. Soon-to-be Graduate Peyton Yost (‘18) claims to have exactly 14 pairs as well.

The brand name Jordan seem to be a pretty popular brand among the boys, considering Yost has four pairs, Wasem has four pairs, and Seth Frazier (‘19) has seven. Frazier states, “All my shoes are Jordans ... I don’t buy any other brand because other brands just look bad and aren’t comfortable.”

In order to keep up with the footwear trends, most of these boys say they ask for shoes around their birthdays and Christmas, but Yost gets them more often. He says, “I get a new pair every three to four months.”

Having so many pairs takes some responsibility from the owner of the shoes. An important part of having shoes is keeping them nice and clean. Holder claims to clean his pretty regularly, “about once a week.” Wasem says he cleans his shoes when they’re dirty “with water and magic eraser, using a toothbrush.” However, Yost states, “I do not get them dirty so I never need to clean them.”

You may not understand why some boys feel the need to have so many pairs, but their reasons vary. Yost simply says, “I like them,” while Holder says, “I enjoy having different options in the morning.” 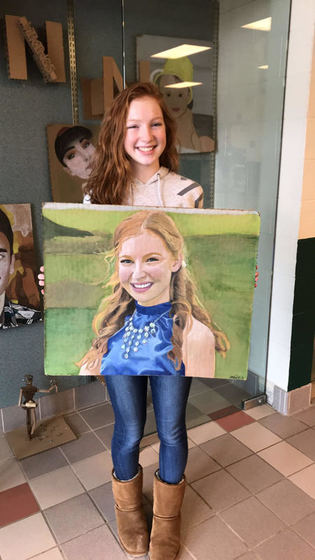 Debolt sets the standard for well-rounded students
By: Megan Payne
​
NORTHRIDGE- High school students strive to be involved in school organizations and make the most of opportunities during their careers, but Katie Debolt takes it to a whole new level. From finishing her freshman year ranked first in her class academically to being named color guard captain as a sophomore, Debolt truly does do it all.

Students and the community alike will have the chance to see her starring in a lead role in this weekend’s musical production, How To Succeed in Business Without Even Trying.

In addition to key roles in musicals, Debolt is involved in Ohio Model United Nations, marching band, solo and ensemble, and she even finds time to help with the middle school musical. Most people wouldn’t be able to find time for all of these activities, but Debolt says, “It works for the most part because mostly they are music related so they all work together, but sometimes I come across conflicts.”

The musicals are her favorite activity because she loves performing in them and it’s what she is best at. Debolt even hopes to get involved in the theatre and singing groups at college. Ultimately, she likes doing the musicals because she sees herself doing something related to music in her future.

Academically, Debolt is just as impressive. She has carried a 4.0 GPA all through her middle school and high school careers, ending her freshman year at the top of her class. She says, “Grades are important to me because my parents expect it and I am hoping to get into a really good college at the end of it all.”

Being both involved and committed to school work, like Debolt is, can be rewarding but also very exhausting. On most days Debolt won’t leave the high school until 6:30 p.m. and on late nights she doesn’t leave until at least 8:30 p.m.

“I average like 6 hours of sleep per night so weekends come in clutch,” says Debolt.

When asked how she manages her time so well Debolt laughed and said, “Honestly, I don’t manage my time at all. I just end up getting lucky time after time. Unfortunately, though, I’m usually up really late doing tons of homework. I always try to not procrastinate but it always ends up happening.”

Debolt mentioned that sometimes the lack of free time that she has isn’t worth being so involved though. She said, “Sometimes I think about quitting usually half way through the season, but I never do and I hate myself for it.”

At the end of it all, Debolt hopes that participating in so many things will look good on her college resume, helping her to get into her dream college. She also expects that it will get her a lot of scholarships to help with the cost of college.

Debolt says, ”I mean I do hope that it helps with college but overall, all of my activities have given me memories that will last a lifetime and for that, I am forever thankful.”

Katie hopes to enjoy her final two-and-a-half years of high school while continuing to stay involved before embarking on her next journey, wherever that may take her.

NORTHRIDGE- We all know Carley Verhovec as head of our food service here at Northridge and as a fun Mom, but a lot of people don’t know about her unique crockpot collection (and obsession).

It all started over 12 years ago, when Verhovec said she began having to cook for seven kids. This became very hard when each kid had his or her own sports schedule, not to mention work schedules on top of that. She began using the crockpots for most of her dinners because there just wasn’t time to cook.  “It just made things easier,” she explains.

Verhovec’s kids think having this many crock pots is a little odd. “Oh, they think I’m crazy,” she said of her children, but she noted they don’t seem to mind so much when it becomes time to eat. In fact, she says, “They do really enjoy eating out of them all the time!”

To store her large collection, Verhovec had a very large shelf built in her basement. “I believe I have 32 crockpots,” Verhovec said. “I keep two or three upstairs in the kitchen that I use almost everyday.”

Despite the many crockpots she has, her favorite would have to be her Ohio State Buckeyes ones. “ They are my favorite for two reasons. One, because it’s the Buckeyes, and two, because they have locking lids,” she said.

She has a favorite recipe for every occasion. “Buffalo Chicken Dip is my favorite ‘party’ recipe,” she explains. Many of her other favorites include Velveeta Homemade Mac N Cheese, which makes “a good dinner side dish.”  As desserts go, she had also just recently made a lava cake that she said turned out fantastic. Her daughter, Savanna Verhovec (‘19), had brought home a hot chocolate recipe for her to try that was “to die for.” However, when asked to pick just one favorite, Verhovec simply couldn’t do it: “I can’t. I guess I have many favorites.”

VERHOVEC’S VELVEETA HOMEMADE MAC ‘N CHEESE RECIPE
You will need 3 ½  cups of milk, 2 ½ cups of uncooked elbow macaroni, 1 lb. Of Velveeta, ½ of water, and ¼ cup of butter.
You first take all the ingredients and put them in a slow cooker that has been sprayed with cooking spray and cover it with the lid.  Cook it on low, for 2 ½ to 3 hours; you could also put on high and only cook it for 1 ½ to 2 hours. Once it is done you turn the slow cooker off and stir the mac n cheese. You should let sit for at least 15 minutes before serving.