THE VIKING VAULT
Spring break through the eyes of a senior
By: Austin White

Spring Break is a nice break in the last 3rd of the year. Let’s face it: as soon as Christmas Break is over, you look toward Spring Break.

But Spring Break to a senior is more than just a break in the last 3rd of the school. It's not just a week of sleeping in and staying up late. It’s one of the last weeks that you will have with your friends. In less than two months, you realize you will be preparing to head to college and to leave your old life behind, or you’ll be working and not have time to be with friends all the time.

For the last spring break with your friends, just make sure you have the best time that you possible can. Go on a trip together or do something because it's your last hurrah.

Logan Garee (18) said, “My friends and I are all going to Florida. We all have different plans in life, and we won't be able to see each other like we do now. These are friends I've known since before kindergarten, and as excited as I am, I don't think a week with them will even be enough.”

If you haven’t thought it through yet, take some time in the next few days to consider your final high school Spring Break as that all-important last hurrah with the friends you've known your whole life before you head out to live the rest of it! 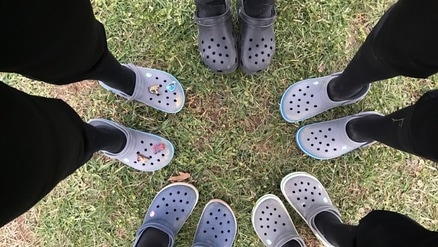 Students rocking their crocs. Photo courtesy of Olivia Humes.
CROCS MAKING A COMEBACK
By: Olivia Humes
NORTHRIDGE- Crocs have been gaining popularity from the students throughout the current school year. As little kids, many people wore shoes known as Crocs. From personal memories, I wore a pair of rainbow Crocs while growing up; however, I stopped wearing them after Primary School. They are slowly beginning to make a comeback at Northridge.

One of the first students to be seen wearing Crocs regularly to school and sports practice was Caroline Liggett (19’). Caroline Liggett says, “I like Crocs because I think they are great everyday shoes, they can be worn year-round (due to fuzzy and non-fuzzy crocs), and there are many varieties.” Liggett says, “I feel like I’m spreading the greatness of Crocs that had been forgotten!”

Savanna Verhovec, who wears Crocs at least half the week comments on them: “I really just like Crocs because they’re comfortable and can go with almost any outfit. I also like customizing them with Jibbitz (decals that stick into the holes of Crocs) because it makes it very original.”
Croc-wearing students have spread to all levels of the high school, although there are students who aren’t jumping on the bandwagon. Jenna Denune (17’), explains that, “I don’t like Crocs because if you walk in water, it will go through the little holes and your feet will be wet.” Chase Stermer (‘19) says, “I really just think Crocs are pointless.”
​
Although there are mixed feelings throughout the Ridge, Crocs are a very versatile shoe, and the multiple styles can accommodate to different weather. They might be getting mixed feelings at Northridge, but they are indeed, making a comeback. Though my current Crocs are no longer rainbow-colored, I am definitely wearing them regularly.

-Olivia Humes ('19)  is the Jr. Web Editor for the Viking Vault. 19ohumes@northridgevikings.org 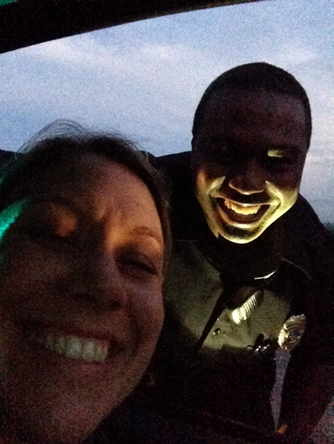 For some, selfie etiquette is not a natural instinct. After listening to disastrous stories of pictures being taken at entirely inappropriate times, I realize that guidelines are necessary to ensure that Snapchat stories don’t get too out of hand.

Rule one: Do not, under any circumstances, take a selfie during a funeral. If you even consider pulling out your phone to snap a picture with a friend attending the funeral, or even worse, the deceased person, you might want to consider seeking professional help. If you find this unbelievable, there are actual people who don’t see the problem with taking a selfie with their dead grandparent.

Rule two: Don’t be that one person that never stops taking selfies. We all have that friend that never puts their phone down and is constantly on Snapchat taking pictures of themselves or whatever they’re doing. Take a moment and evaluate your life; are you that one friend? Addie VanKirk (‘18) advises, “The wrong time to take a selfie is all the time. Well, for me it is because I’m ugly.”

Rule three: Many people are unaware that some selfies can be damaging to your health. Sydney Miller (‘18) knows this truth too well. “One time I took a picture of Gabe (‘18) with the flash on after he got a concussion. We were at the doctor’s office and the doctor was really mad,” says Miller. Try not to do too much damage to anyone prone to the “dangers” of picture-taking, even if it is your sibling.

Rule four: NEVER snap and drive! I’m just going to leave that one there.

Rule five: No matter who is Snapchatting or texting you, resist the urge to take a selfie during a conversation with someone else. Believe it or not, many people are guilty of taking selfies mid-sentence. “I hope it’s common sense to never take a selfie in the middle of a conversation, but you never know,” says Hayley Adkins (‘17) about the issue.

Rule six: Don’t try to turn a run-in with the law into a funny Snapchat story. The police officer probably won’t want to take a selfie with you after giving you a speeding ticket. Getting another fine for selfie-taking would only result in embarrassment.

Hopefully these guidelines have caused you to reassess your selfie habits. When in doubt, abide by this simple rule: if you have to decide whether it is an inappropriate time to take a selfie, it probably is.

There are many songs out there that can be used to make hours spent studying go by faster ... that won’t also distract you. Even though we all like to listen to either rap, country, rock, pop, etc., it can get us distracted and tied in the moment of trying to get what we need done. Here are some song choices that can make studying less boring but also focused.


Hopefully these songs can help you for upcoming tests, exams, ACT, etc. Even though the music is old, it was made for a reason and maybe it was made for just being a study tool.

-Zoey Stout (‘18) is the Photo Editor for The Viking Vault. 18zstout@northridgevikings.org
Advice for Senior year
By: Kayla Butler (a senior)

With the school year coming to a near close, a lot of seniors have started to reflect on the four years they spent at Northridge High School. As the nostalgia sets in, many begin to ponder what the four years would have been like if they had done things differently. In that spirit, here is some advice for your LAST year as a Viking.

1. Plan early
One thing I wish I would have done at the beginning of senior year was to plan more things ahead of time. I wish I would have thought ahead about the ACT, college, and graduation. If you can, start thinking seriously about these things your junior year. You’ll have a lot more time to figure things out and won’t feel as stressed out.

2. Don’t worry too much about what others think
During senior year more than ever, everyone will be focusing on themselves and their own future. So, if you want to, wear sweats all week, don’t worry about mascara every morning, and take a nap in your study hall. Soon, especially towards the end of the year, it will be the “new normal.”

3. Enjoy everything you can
Senior year is filled with a lot of “lasts.” You’ll have your last first day of school, go to your last football and basketball games, and have some of your teachers for the last time. My advice would to be enjoy as much as you can while at school. Sure, there are some parts that aren’t very fun like homework or studying, but you should look past those to make memories that you’ll remember.

4. Make the most of your time
One of the best and worst things about senior year is you tend to become friends with different people, and you wonder why you weren’t friends all four years of high school. My advice would be to talk to everyone, no matter if you’re friends or not, because you might gain a new friend out of a small conversation.

5. Grades are still important
In some ways, senior year is the most relaxed year of high school, but you can’t check out just yet. You still need to study and turn in your assignments on time and try to get the best grades you can. In some cases, a class or two that you are taking could determine if you will graduate on time.

6. Participate
It’s your last year! Go to basketball and football games, chorus concerts, the musical, Homecoming and Prom, etc. It’s smarter to go and try to have a good time with your friends instead of missing out and possibly regretting your decisions later.

7. Be there for your classmates
You have known most of the people in your class since you were five or six years old. This is the last year that everyone will be together. Stick up for each other and try talking to people you wouldn’t normally talk to. Soon, you probably won’t see most of them ever again.