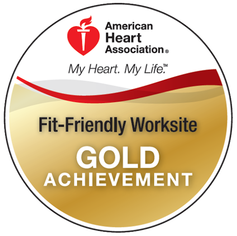 NORTHRIDGE - The district recently won The Gold Achievement Award by the American Heart Association for the staff’s healthy choices regarding diet and exercise.

District Nurse Nikki Higgins BSN/RN said the Heart Association “rewards organizations for their progressive leadership and concern for their staff,” and the Gold level award is a very big deal. Only two other districts in Licking County achieved this rate of fitness.

The requirements for the program include mandating “healthy food choices to be available to staff, a physical exercise program to be in place, and that the school is completely tobacco free.” Yet, Northridge is not content to slap up a few “tobacco free-school zone” signs. Instead, the district instituted the Walking Vikes Staff Walking Program to inspire teachers to exercise, and that initiative is continuing this year. Higgins said this grading period she is challenging the staff to “spend 2 hours each week doing some sort of physical exercise.” Each staff member that reaches that goal will be entered into a prize drawing.

Higgins said she feels strong that “while this particular award is due to our staff environment, not the student environment, ...  if the staff makes healthy life choices, the students will notice, be motivated, and join in!” 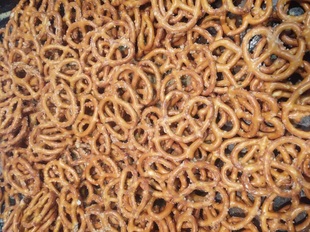 Fresh batch of spicy pretzels. Photo taken by Hugh Prentice ('16).
Spicy foods getting attention from students
Some aren’t ready for the heat
By: Hugh Prentice

NORTHRIDGE - Recently there has been an increase in interest here at Northridge in spicy peppers and foods made with those peppers. It’s become a rite of passage, a test of toughness, and a culinary experiment of which some people may need to steer clear.

Sophomore Iain Prentice (’18) makes different batches of pretzels that are coated in spicy flavoring made from some of the hottest peppers he could find. Prentice takes the peppers and turns them into a powder that he can either coat directly onto the pretzels and bake them in the oven or combine the powder with other spices or flavors to make the pretzels taste better. At first, the spicy pretzels were confined to his lunch table and his friends, but word soon got out of the incredibly spicy pretzels that he was serving. Soon other students were approaching Prentice’s table and asking to try some of them.

Prentice says, “At first it was cool having all these people interested in trying the pretzels, but then we saw that some of them couldn’t really handle the heat, so we had to think a bit more about who we gave them to.”

Prentice gave me some of the pretzels so I could share them with my friends. They didn’t believe that the pretzels could be as spicy as everyone was saying and ate a lot in one sitting, against my warning. Needless to say, my friends had a rough lunch period that day.

Needless to say, these pretzels aren’t something to eat by the handful, as some of the students at Northridge High School have done. Those who have tried this have stated that the heat is enough to bring tears to their eyes and is actually painful. So, if you are ever interested in trying any of the pretzels created by Prentice or going straight for the pepper, remember the saying: If you can’t handle the heat, stay out of the kitchen.