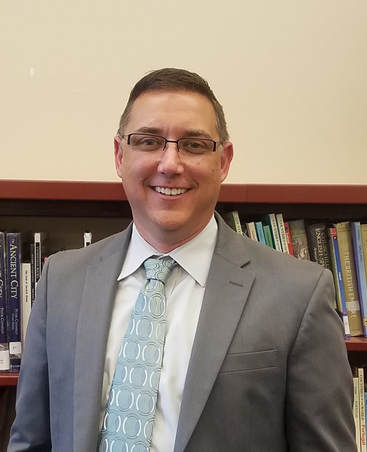 The New Leader of the Vikings
By: Katie Applequist
NORTHRIDGE- A new year always brings some new faces. Of course an entire class of new faces joins us, but this year, one of the new faces happens to be in the District Office. This school year, Northridge welcomed new superintendent Scott Schmidt.

This is Schmidt’s 20th year in education. He has taught at Chapelfield Elementary in Gahanna before becoming principal there and, through natural growth and opportunities, became superintendent of Gahanna Jefferson Public Schools.

Schmidt says, “The best part of being a superintendent is the variety. I love planning for the long term as well as making in-the-moment decisions. Seeing the day-to-day operations in the classroom is really interesting too.” But he didn’t always see himself as a superintendent. Originally he only wanted to be a principal.

Schmidt’s favorite thing about Northridge is the community. “The people here are really friendly and there’s a variety of opportunities for students to succeed,” he said.

He came to Northridge wanting to improve communication with the community, so he’s launched a twitter account, @NorthridgeSupt and, in addition, sends out emails to the community. He also wants to increase leadership opportunities at all levels of the school system.

There was nothing that surprised him about coming to Northridge, and he is looking forward to getting to know teachers and students, learning everything the district has to offer, and getting used to the new environment.

Schmidt hasn’t always spent his time in a school. He spent a year volunteering with a group called “Up With People,” an international youth group who promotes understanding and cultural diversity around the world. He travelled around the US and Europe (a new city every couple of days), doing community service and staying with host families.

“I have amazing memories from that time,” he says. “Each host family has so many memories attached. My favorite though, would have to be performing in the opening ceremony in the 1996 Olympics in Atlanta, Georgia.” Schmidt was a backup dancer for featured singer, Peabo Bryson during the opening ceremony to mark the introduction of softball into the olympics.

During his own days as a student, Schmidt played trombone and tuba in band until his freshman year of high school when he became too busy to continue. If you were at the first home football game on September 8th, you may have seen him conduct the marching band during the fight song prior to the start of the game.

-Katie Applequist (‘18) is a second-year member of the Viking Vault and Entertainment Editor. 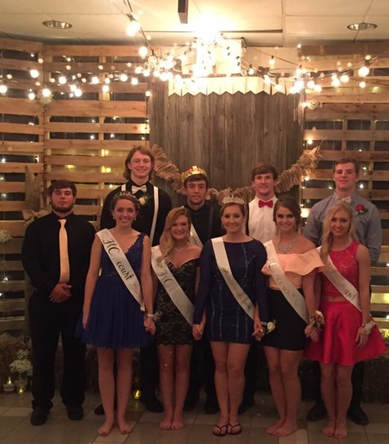 The Homecoming Court at the dance. Photo courtesy of Madie Legg.
Homecoming 2017:
Country nights really topped city lights
By: Madison Legg
NORTHRIDGE- An old wagon wheel, barn doors, and pallets with decorations and lights greeted those who attended Homecoming 2017, where the theme was City Lights Ain’t Got Nothin’ on Country Nights. The auditorium was filled with music and dancing.

Senior Leadership class ran the whole event, from coming up with what the theme was, to tearing everything down the next day. According to Advisor Kristen Grow, “we had a great turnout this year” with around 285 people, which is around 65% of our school. Tickets were $10. This means the school raised about $2,850 dollars to put toward the 2017-2018 Prom this coming Spring.

During all of the fun and dancing, Homecoming King and Queen were also presented. The court nominated for queen included: Megan Trainer (‘18), Natalie Neumeyer (‘18), Alison Bash (‘18), Kaylin Zipf (‘18), and Cora Dorman (‘18). Those nominated for Homecoming king were: Alex Chalfant (‘18), Gabe Miller (‘18), John Berkley (‘18), William Cox (‘18), and Evan Willeke (‘18). After voting and waiting for Friday night’s pregame celebration, Trainer and Chalfant were crowned Homecoming king and queen.

At the dance, many students wondered about the “mystery man” in the balcony overtop of the auditeria. It turns out it was Mrs. Rauchenstein’s husband, who was chaperoning the dance.

Many people thought that Homecoming was very memorable. Isabella Frank (‘21) said “it was really fun and I’m really excited for next year.”

Others didn't think it was very fun, such as Alex Rosshirt (‘19) claimed, “It was too bright and I didn’t want everyone to see my embarrassing dance moves.”

Overall, most people thought the dance was very good. We also had a very good turnout. Our dances are very good compared to other people's dances, Savanna Verhovec (‘19) has even heard some Johnstown students said that our dances were the best one they have been too.

Lots of people also said that they liked the songs such as “Cotton eye Joe” and “Cupid Shuffle” because they like how everyone joins even if they don’t know the dance to have fun with everyone. Some people liked the songs that you could sing at the top of your lungs too. Megan Trainer (‘18) says, “I like the songs such as “ayy ladies” and “yeah” because when they come on me and my friends look at eachother and know its about to get lit.”

Julia West (‘20) says “that’s what Homecoming is all about, getting all dressed up. Getting your hair done and your nails done. Dancing with friends and having the time of your life even if it is only for two and a half hours. It’s about making memories that in ten year you can look back on and laugh because you remember you probably looked like a complete fool dancing but you didn’t care and maybe you still don't.” 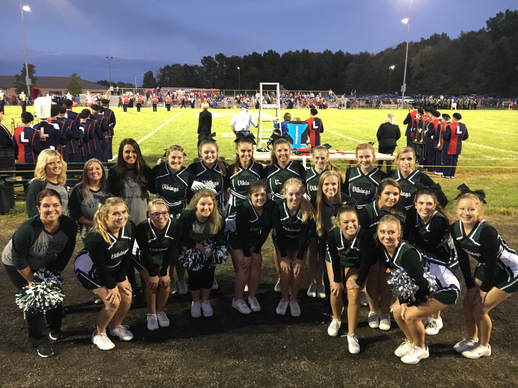 Current NHS cheerleaders with the Alumni cheerleaders at the homecoming game.
Former cheerleaders return for Homecoming
By: Mackenzie Holder
NORTHRIDGE- Most people dread their “last game” as a highschooler, whether it’s playing football or basketball or being in the student section; after all, once it is over, there is no going back. This year, though, the Northridge Alumni cheerleaders got one more chance to cheer at a football game.

During the first half of the game on Sept. 15, the Northridge alumni cheerleaders had the opportunity to cheer with the current cheerleaders. They each got a custom t-shirt to wear at the game. The t-shirts that they received had their graduating year on the back of them.

When asked, Gabby Webb ('19) stated that, "This is a cool experience because in other sports there is not an opportunity for alumni to come back and participate. In cheerleading they can comeback and participate so it is exciting for them to have this chance again. Once you get back under those huge lights with lots of people right in front of your eyes all the nerves kick back in like it was your first game again.” Each and every cheerleader remembers their first game whether it went horrible or amazing those memories will never leave you. Even though you have four years in high school to participate in anything you want it is gone in the blink of an eye and most people would do anything to get one day back. So luckily the alumni participating get that one night, Webb explained.l

Most of them said they were nervous and very excited leading up to the game. As the game started, they all started bringing up their favorite memories from high school. As the night continued, they began to be more comfortable and have a little more fun with it. They began to become loud and peppy and excited to cheer on the Vikings. It happened to be a very exciting game because the Vikings grabbed their 4-0 record.

2013 graduate Erin Reinhart stated, “I could not wait to be back on the sidelines one more time, cheering on the Vikings. It brings back so many good memories with me and my friends.”

The alumni cheerleaders even got the chance to stunt with some of the current Northridge high school cheerleaders.

“As they were in stunts, they were shaking and so nervous, but they did so good. The crowd loved laughing at them and watching them struggle through the cheers and the stunts. They thought it was very funny. It was a good laugh for the alumni and just a overall good time for them, we had a lot of fun being on the sidelines with them” said current cheerleader Emily Smeller.

“Hopefully as the years go on we can get representatives from many more classes and we can get more cheerleaders back and help them have one more night as a Northridge cheerleader. We hope to have a better and better turn out every single year that this tradition continues,” said Coach Melissa Bailey. 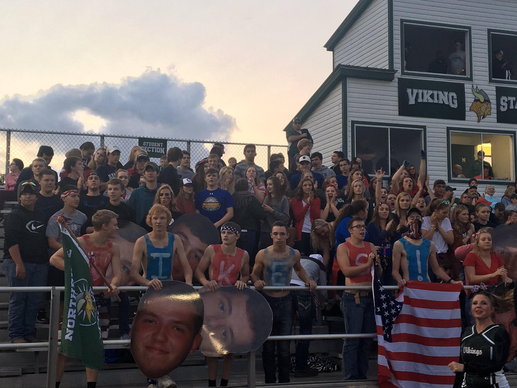 Do:
Participate in cheers: Go Vikings!
Participate in themes: Let just say this, you don’t want to be that person that is wearing a white shirt on “Black Out” night.
Listen to your elders: They have worked hard to make the student section what it is, so respect the upperclassmen.
Allow Seniors on bottom bleachers, then juniors and sophomore and Freshman at the top: This is just a standard rule
Be respectful when the national anthem is playing: Courageous men and women have fought for our country.
Participate in the Marching Band’s music: They have some groovy tunes, so dance or sing along!
Wear deodorant: This is self explanatory…
Keep updated with the student section on Twitter: Check it out @NUNIT2018


Don’t:
Don’t throw objects at cheerleaders or others: Throwing objects can cause injuries to spectators.
Don’t stand in the back and talk: Cheering is the reason for being in the student section, so get involved!
Don’t complain or criticize themes: Much thought has been put into themes, so just enjoy them!
Don’t trash talk your own team: If you don’t have anything nice to say, don’t say anything at all.
Don’t stand on the railings: This makes it hard for spectators to see.
Don’t shove: This can cause injuries to our student section participants.


As Seniors are approaching their 4th and final year in the Northridge student section, they have some advice to underclassmen.

When it comes to the student section, what do you suggest that underclassmen do?
Alex Chalfant (‘18) says, “I suggest that they cheer and don’t sit back there and do nothing. Participating in the themes is a good way to show school spirit.”

The four years of high school go by extremely quick, so appreciate ever fun moment you have in the student section.