THE VIKING VAULT
Ski Club prepares to hit the slopes
By: Darian Dick
NORTHRIDGE - As winter sports are getting in their full swings, Ski Club is also getting started up. This year, Ski Club is reaching high numbers, with 60 members from both the middle school and high school. Ski Club is advised by Mr. Sam Reid, sophomore English teacher, along with help from several other teachers and parents who are volunteering to help.

This is the first time Reid has been involved in Ski Club. He began to take interest when he was just a teenager and went skiing with his youth group and has loved it ever since.

Dustin Chalfant (‘20) is taking on his second year of Ski Club this year. Chalfant said that he plans on doing it the rest of high school. Before joining the club, he said he had only had been skiing one time.

Ski Club takes place six Sundays during January and February. There aren’t any practices for it, but there are sessions for training that are available at the ski resort. Snow Trails opens as soon as snow is consistent enough for skiing and snowboarding. Members get on the bus at 1:15 p.m. on those Sundays and don’t return until around 9:45 p.m. Snow Trails has a skiing terrain, a lodge, and a rental center. Food is available all day at the resort, but Ski Club meets to eat together around 4 p.m.

Prices to join range from around $150 to $380. Skis and snowboards are available by rental.

“I went to the training sessions last year before the season started up, and it was so helpful,” Chalfant said. “I learned a bunch of new techniques that I show the new skiers on the team this year.”

Ski Club isn’t competitive, according to Chalfant: “Everyone just kind of goes and does their own thing. With all the different hills, we’re all spread out and on our own or with a small group.”

A first-year member, Jacob Smith (‘19), says that “Anyone considering joining should definitely do it! I regretted not joining last year so I went a few times on my own to have a little experience.”

Smith is looking forward to the season. Since he’s never done it before, he claims he’s excited to have a new group of people to meet and spend the season with. He also is excited to have people to help him since he’s new to the slopes. Smith says “Starting as a senior is definitely going to be hard since most people have had experience in the past, but since they have been doing this for a while, I’m hoping they’ll be able to help me out!”

Smith, Chalfant, and Reid all encourage new members to join next year. Chalfant advises “you are going to fall … A LOT! But don’t let it stop you because it’s all for fun! You aren’t even being scored!” 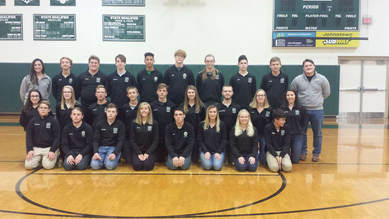 The Northridge High School Swim Team gathered for a team photo on picture day. Photo courtesy of Karen Holt.
Swim team ready to make a splash in the LCL
By: Megan Payne
NORTHRIDGE - As the winter sports season rolls around, the swim team is looking to build on last year’s successful season and, with the addition of some new swimmers to the already talented team, things are looking good for the Viking swimmers this season.

Riley Bunstine (‘20) said, “It was a good first meet. We all did well in our events and we all saw things that we can improve on throughout the rest of the season.”

Hannah Vance (‘22) is one of the freshman on the team this year. She has been swimming her whole life, but when asked if she was nervous about this year, she said, “Yes, very.”

Vance is excited to grow with her team and get her high school career started in the right direction. She said, “The older people on the team make me feel more comfortable so that helps me relax a little bit.” For her personal goal, Hannah hopes to drop her 500 meter freestyle below 5 minutes and 10 seconds.

Riley Bunstine (‘20) is one of the experienced swimmers on the squad. Swimming runs in her family as her sister, Josie Bunstine (‘16) held most of the swimming records at Northridge during her high school career. Last season, Riley became the first Northridge swimmer to qualify for the state swim meet. Unfortunately, she was diagnosed with pneumonia the week of states and didn’t perform as well as she would have liked to.

Because of this, Bunstine said, “My goal is to place at states this year. I’m hoping that this year is my year.”

Since the talent on the team is so high this year, everyone seems to have a pretty good feeling about the way this season will go. Jason Roser (‘20) is positive about the season, saying that the team is made up of a lot of swimmers with different talents which will serve them well. More specifically, Roser said, “Based on the last meet, the boy’s team should do really well this season. I think we will be able to finish in the top 3 of the LCL.” For personal goals, Roser is hoping to drop his 50 meter freestyle time below 30 seconds. As for team goals, he said that he hopes both the girls and boys get the chance to swim at districts.

Both Vance and Bunstine said that they are very excited to get the new season started as well.

Bunstine stated, “We did lose a lot of good seniors last year. That class had a lot of good seniors that contributed a lot to the team, but I am confident in the talented freshman that we have coming in this year.”
The Vikings’ next meet is on Saturday, December 8th at The Ohio State University.-Megan Payne (‘20) is the junior web editor for the the Viking Vault.

- Megan Payne (‘20) is the junior web editor of the Viking Vault.
LCL Awards and more from our Vikes
By: Cole Fox
NORTHRIDGE- Fall sports have officially come to an end at The Ridge; however, the Vikings as a whole ended their season well accomplished and brought home plenty of hardware.

Koker (‘21) stated, “This Season was a great representation of how our program is progressing, and we have a bright future ahead of us.”

Members of our girls Cross Country team also made a “run” for State glory. Megan King (‘19) ran a 20:32 5K and placed 40th overall. She won the District race. In addition to King, our other top tier runner, Olyvia Ashbrook (‘21), ran a time of 20:58 and placed 63rd overall. Olivia also placed 3rd at the LCL meet and 6th at Districts.

Ashbrook (‘21) stated, “Last year I was one runner short of making it to State, and decided I had to train hard to make it where I wanted to be. In addition to making it to States I was also happy to be accompanied by Megan King (‘19), especially since it's her senior year.” All together our girls ran a very well season. In addition, to our girls team our boys team had a successful season, and runner Nick Houck (‘21) ran in the District race, a first for the boys since 2011.

Northridge’s golf team has made many advances in the past few years and that really could be due to the juggernaut that the Teeter brothers are. Jarrod Teeter (‘19) has been a highlighted golfer of the LCL for the past two years and was awarded 1st team All League and 1st team All Central District and 2nd team All District from coaches. In addition, Ross Teeter (‘21) (who happens to be the younger brother of Jarrod) has made quite the name for himself in the LCL. Ross was named LCL golfer of the year and receive high honors. In addition, he was named to the 1st team All Central District. Lastly Alex Hooke (‘20) received Honorable Mention All League and All District.

Hook (‘20) said,  “This golf team is one of the most decorated teams in Northridge history, and this was a fun year. However, we are looking forward to improving for next year.”

Reese commented on the season, saying, “This year wasn’t our year, clearly. It's unfortunate that we couldn't give this senior class a winning season like last year. However, the expectations haven’t changed. If anything, they’ve become higher, and we fully intend on exceeding them next year.”