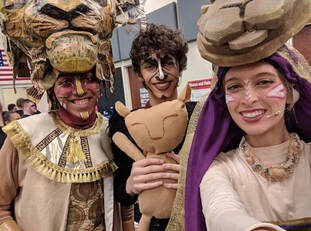 Costumes were part of the success of The Lion King. Pictured here are Devonte Adams, Chris Curran, and Alayna Curran. Photo by Alayna Curran.
Lion King may have been best show yet
By: Claire Wasem
NORTHRIDGE - The second weekend of March featured the show many say was NHS’s best ever musical production, Disney’s The Lion King. The wonderful performance consisted of colorful, handmade costumes and props that were created by the cast and crew.

Musical Director and Music Teacher Mrs. Jody Hepp says she is, “extremely pleased about how the musical turned out.” She continued, “When you put on three shows, it is typical that one performance is not as good as the others, but this was not the case with The Lion King. The kids did great and every show was equally amazing.”

Hepp herself worked countless hours to choreograph dances, help student performers learn lines, and just get the show together in general.

Tickets for the musical were sold for $10-12 a piece, and “Sunday sold out,” said Hepp. Each performance (Friday night, Saturday night, and Sunday’s matinee) sold about 350 tickets: “I'm very happy and extremely impressed on how well this production did,” Hepp noted of the turnout.

Katie Debolt (‘20), who played Nala (one of the main characters in the production), says, “I loved doing the play this year. Practices got stressful, but everything was worth it on show night.” Of all eight Northridge productions she's been in, Debolt says, “This is definitely one of my favorite school productions.”

Many who attended agreed. “The was the best show I’ve seen us put on here, and that’s saying something,” said English Teacher Mrs. Hotchkiss.

- Claire Wasem (20’) is entertainment Editor of the Viking Vault.  20cwasem@nothridgevikings.org
2019 senior class trip: Mohican Adventures
By: Madison Legg
NORTHRIDGE - Every year it's always roller coasters and walking around theme parks, but this year the senior trip will offer so much more.

When the seniors are getting into March and April, they are really focused on writing scholarships and deciding on what colleges they are going to. It is a very stressful time for many. Olivia Shank (‘19) says “Everyday I go home and take a nap, and trying to find time to hang out with friends and write scholarships is very stressful. We need something to look forward to.”


Good thing that our class trip is right around the corner on Thursday, May 23. Unlike previous years when seniors went to Cedar Point, we will be going to Mohican Adventures to do many fun things like a seven-mile canoe trip, go kart racing, mini golf, an aerial adventure course, and have an amazing cookout together in a pavilion by the Mohican River.

The bus will leave at 9 a.m. on Thursday morning and it will be about an hour drive to get there. There are two different ticket prices, but they both include canoeing, go karts, min golf, and food. The first one is $15 and includes all the things I listed above and the other ticket is $35 and it includes the things above plus the aerial park. The cost includes food for the day.

New Senior Class Advisor Mrs. Kim Garee says, “I've chaperoned the Cedar Point trip off and on over the years, and it's been fun. But, on those trips, the seniors sit on the bus with a couple of friends, and then when they get to the park they just split off in little groups. What I think will be neat about this year's trip is that, since there will be a picnic pavillion and games near that, not to mention all those other opportunities just to spend the day playing, the seniors will have more of a group memory of a last day spent together. And for a lot less money."

For lunch there will be a pizza buffet from 12-3 with as much pizza as you can eat. Also, for dinner, there will a pulled pork cook out provided by the Willeke family. Again, this is all included in the price of your ticket. We will leave Mohican between 7 and 8, returning to the school between 8-9 p.m.
​- Madison Legg (’19) is a co-entertainment editor of the Viking Vault. 19slegg@northridgevikings.org 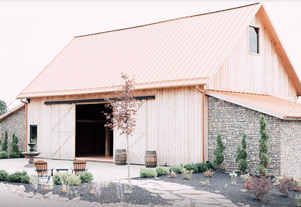 Tickets will be $40 per person and available in the high school office between April 8th through the 26th from 8 am until 3 pm on weekdays. There will be assigned seating, so you will need to buy your tickets with the people you want to sit by.

For the menu, it will be buffet style. There will be a vegetarian lasagna option, a beef option, and chicken tenders for the main course along with a side (green beans). There will be salad as well. For refreshments, there will be lemonade and water available to drink.

The venue being used this year has never been used before for Northridge’s Prom but is “Absolutely beautiful and close. It has two buildings, one where we will have the dinner and another for the dance,” according to Prom advisor Mrs. Miller.

There is no After Prom and hasn’t been one for the last couple of years due to low attendance and lack of interest. There is also no specific “theme” for Prom.

If you are an underclassmen, you are able to attend Prom only with a junior or senior date. If a date is attending from a different school, you will have to get a permission form completed ahead of time.

For the entire duration of the night, what the Prom advisors are possibly planning is the pictures will be taken from 5-6, dinner from 6 -7:15 and the dance from then until 10 p.m. The crowning for King and Queen will be at 7:45. This is not all set in stone, so make sure to stay posted on what will be happening on May 4th! 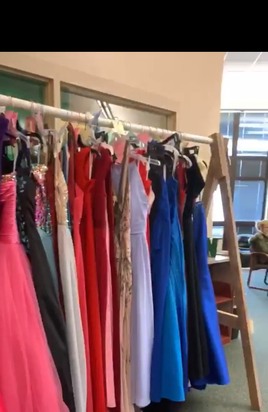 Posters and social media were used to advertise the event, held from 9 a.m. to 2 p.m. For some, those pictures were the reason that they decided to come and check out the dress options. Quinn Love (‘20) saw a gorgeous dress on one of the posters and said she knew instantly that she needed to have that dress.

Each dress was $25 and included shoes and jewelry. There were also three chances to win prizes, and those prizes included two gift cards to The Village Spa and a gift card to the Crafty Garden for a corsage or boutonniere. The winners of these prizes will be contacted soon with information on how to get their prizes.

The Project Prom boutique was open to any schools, with the only restriction being that for the first hour it was only open to high school seniors. All kinds of dresses were available at this event … long dresses, short dresses, yellow dresses, floral dresses, and even princess dresses you name it they probably had it.

Audrey Holt (‘19) states, “At first I was nervous because what if I didn’t find a dress but I was also so excited to go look at Project Prom. The second I walked in a dress caught my eye. I can not believe that I got a great dress for only $25. I definitely recommend checking out their selection next year.”

With the successes that this year brought from Project Prom, the teachers and parents involved say they hope to keep this going every year. One of the parents who put on this event, Teri Holder, stated “This event was a great way for girls to get a beautiful prom dress and make sure that they do not break the bank doing so. An average prom dress cost around $200 and that does not include the price of hair, shoes, tickets so by going to the prom boutique offered at our school, you would be saving a lot of money.”

If you were unable to attend Project Prom and want to check out the selection available make sure to send an email to 19mholder@northridgevikings.org where you can receive details and photos about how to still get a Prom dress. There are great dresses still available, so if you are not having luck in stores shoot a quick email to the one listed above ... who knows? Maybe the perfect dress is waiting for you.

Holt (‘19) also stated, “I want to give a huge thank you to all of the teachers, parents, and students that helped put this great event on for Northridge High school. The hard work and time were very appreciated in allowing girls to find prom dresses for a fraction of the price.”
​
- Mackenzie Holder is the Print Editor for the Viking Vault
19mholder@northridgevikings.org
Winter sports wrap up
Vikings recognized with honors
By: Shelby Yorde
NORTHRIDGE- It seems crazy that it’s that time of year when everyone is in transition from one sport to the other. For some, this is the last time they will ever do what they love again, while others get another shot. For our school, a lot of people were recognized for achievements in the winter season of 2018-2019.

For four-year state wrestling finisher Klay Reeves (‘19), it has been a fantastic season. Reeves won districts and even placed 7th in the State meet He went all season with a record of 31-1 and also was named MVP for the Licking County League. He was also awarded first team all metro.

Our swim team also had a great season, with Gabe Farthing (‘20) being the first boy to make it on the podium at the district swim meet. Farthing got 8th in the 200 freestyle, allowing him to claim his title. Riley Bunstine (‘20) also made a huge achievement and pulled out a victory in the back stroke. This led her to States, where she finished 5th. This also allowed her to be the first girl to be on the podium at States in the school’s history. With this came 1st team All Ohio.

“It was a great season and our team just keeps growing in talent and in size,” Bunstine noted. “I can’t wait to see what next year brings and the accomplishments we are going to have. I love everyone on the team, and I’m really going to miss the seniors.”

As for our bowling team, they claimed a trophy for getting third at the LCL match. The team included, Nathan Kapavik (‘21), Ashton Walters (‘21), and Blake Crow (‘21).  Not only that, but Walters was named league honorable mention.

Girls basketball had Olivia Humes (‘19) winning 1st team LCL and 2nd team 11th district. Humes also got to play in the LCL All Star Game. The three seniors: Humes, Hunter Henson (‘19), and Caroline Liggett (‘19) also got to play in the senior showcase on March 12th. Humes says, “It was a great season and I’m glad I got to play with this team. I’m really going to miss everyone so much.” Henson says, “I’m so happy I get to play with the cereal line [what the three seniors call themselves] one more time!” Megan Payne (‘20) was also named LCL Honorable mention.

With such a good winter season, many are excited to see what next year brings. However, for now we move onto the Spring season of 2019 and the exciting things it will hopefully bring. See the sports page for an inside look.
​- Shelby Yorde is a junior editor for The Viking Vault. 20syorde@northridgevikings.org
Powered by