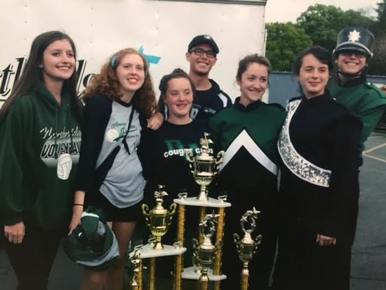 The band's competition show this year is entitled Speakeasy and has a 1920s theme. It features soloists Ryan Debolt (‘18) on trumpet, Olivia Carpenter (‘18) on flags, Desiree Ecleo (‘18) on mellophone, Noah Miller (‘18) on trombone, Victor Weaver (‘18) on clarinet, and Katie Debolt (‘20) on flags.

The band has 50 members ranging from seventh graders to seniors and has been practicing since April for this season.

According to assistant field commander, Emma Holbrook (18’), “The band is like a huge family. There’s so much friendship and love surrounding it. Everybody pushes everybody to be the best they people and musicians they can be.”

“When you’re around the same people day after day for four months you learn a lot about them. You just get close and they become more than friends; they turn into siblings,” laments field commander Marie Severns (‘17), who has two actual younger siblings in the band.

This season has been different from any in the past.

“There’s way more dance and acting aspects this year,” says Leah Kinkead, (‘17). “It’s been fun to learn but it’s harder to do than what we’ve done in the past.”

“We’ve had higher goals this year. We’ve proved ourselves and have gotten better every year and this year was an extension of that,” says Megan Smith (‘18).

“I am very proud of all the hard work the band has put into this season,” says Marie Severns, (‘18).

Some of the goals for the band this year were: get a “Superior” ranking at State competition, win B/C grand champion, Qualify for State competition earlier in the season than last year, improve every practice, and become better musicians.

“Band has taught me so much,” says Alex Healey (‘17). “It’s taught me how to interact with people for extended periods of time as well as that in order to succeed you have to set goals, work hard, put yourself out of your comfort zone and be willing to fail.”

-Katie Applequist ('18) is a first-year member of the Viking Vault and Jr. Print Editor. 18kapplequist@northridgevikings.org 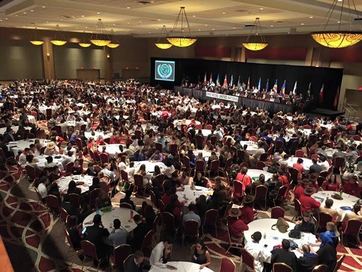 OMUN getting ready for "global" contest
By: Kayla Butler
NORTHRIDGE - Just after Thanksgiving, two teams from Northridge will compete in the three-day global Ohio Model United Nations simulation in Columbus. They will represent the nations of South Korea, Switzerland, and Sweden in areas like resolutions and even native talent.

About 19 students, freshmen through seniors, will take on leadership positions representing their nations and their high schools at the Hyatt Regency next month. The program is designed to help students learn about the United Nations and its operations as the world’s humanitarian and international peacekeeping organization.

Carpenter’s (‘18) favorite part of OMUN is “the talent showcase.” This is where students will compete against other groups, showing their knowledge of the culture and the country they studied in a creative way. Each group member has to participate, and the presentation must be five minutes long. Carpenter adds that more students should consider becoming part of OMUN because “it’s fun” and “shows you have leadership skills.”

In October, OMUN participants also threw a fall dance at Northridge High School to raise money for their program.

“Audiences will know the songs from this musical and will probably be singing along,” says Director Jennifer Ulery.

Forty-four sixth through eighth grade actors and actresses will bring those songs to life in a story line that draws from a combination of mythology and 80s corniness. Xanadu is the tale of a man named Sonny (played by Chad Bailey) who wants to open a roller disco rink, and his inspiration comes from his Greek muse, Kira (played by Ambry Petrushka). Kira and her sisters come down to earth to help Sonny achieve his “place of perfection” in the skating rink. Two of those sisters are evil – Melphomene (played by Kierra Adams) and Calliope (played by Molly Brannigan) – and plot to make Kira fall in love with Sonny to get revenge on her for being Zeus’s favorite.

Crowds can expect to get their money’s worth not just from the humor of the show but also from a big lit-up sign at the roller rink that will move up and down via a garage door opener, a foam Pegasus, and fun costumes. Boys will be in 80s rocker jackets and wigs, and leads Sonny and Kira will perform in roller skates.

“Thank goodness Ambry Petrushka is a hockey player when she isn’t on stage,” Ulery says with a laugh. In addition to skating her way through the performance, the eighth grader will also juggle both an Australian and Southern accent as part of her character.

“The bar for these performances is set higher and higher every year,” she says.

Two styles of music mingle in the showstopping tune of “Dancin’,” which marks the evolution from 40s bee-bop to 80s rock and draws all 44 performers out on stage.

“It’s like getting to go back in time and experience the music of our parents,” said Bailey.

Ulery and Co-Director Jody Hepp say they were sad to lose about 20 talented eighth graders from last year, but they have been amazed at the way other middle schoolers have stepped up in this production. “We’re so excited by this group,” Ulery said. “They are people with incredible abilities that just came out of the woodwork when we auditioned. These are 11, 12, and 13 years old kids who have worked their tails off, and they’re pretty darn good at what they do.”

Hepp said the almost perfect balance between sixth, seventh, and eighth graders this year is unique. “It’s great to see them grow and develop,” said Hepp, who teaches vocal music at Northridge. “I’ve been so impressed with how this group does on learning harmony. My goal is always for our musical kids to sing in parts, and these kids are doing a great job!”

She adds that she thinks the take-away from this year’s musical will be an impression of just “how much fun” those middle school performers were having on the stage.

The cast includes other lead rolls like Bryce Bammerlin as Danny, Bella Severns as Erato, Jenny Siders as Polyhymnia, Lauren Aamodt as Urania, Olivia Debolt as Euterpe, Ty Bartlett as Thalia, and Noah Thompson as Terpsichore.

Last year, the middle school’s production of Beauty and the Beast Junior drew more than 1,200 people, so pre-ordered tickets are recommended to assure a good seat. To do so, call Northridge High School at 740-967-6651. Tickets are $8 for adults and $6 for students and seniors.