NORTHRIDGE- Recent national and local events have led to discussions about the safety of schools in the country. According to an email sent out on Friday, February 23 by Superintendent Scott Schmidt, the safety of students, staff, and visitors and the promotion of an environment of learning is the district’s number one priority.

The email also emphasized the motto “see something, say something.” Students and members of the community are encouraged to share information about potential threats to safety. You can call the school during school hours or use the Stay Safe hotline 24 hours a day, 7 days a week. 1-866-listen2me or 1-866-547-8362. This number is also located on the front page of the district website.

While specific details of the school’s response can’t be specified due to security, Schmidt says that there are ongoing conversations with staff about safety procedures and the school has a close relationship with the Licking County Sheriff’s Department.

However, the school has started locking all classroom doors and the teachers have a “safety” bucket in each classroom. The buckets have objects that can be thrown at an attacker and basic first aid supplies. The bucket itself can be used for VERY extended lockdown drills.

In addition, the high school has started requiring everyone that leaves the auditeria during lunch to have a pass prior to their departure. Principal Amy Anderson says, “We need to make sure that we know where every student is in the building, and requiring students to present passes before (not after the fact) helps both sides, the teachers and lunch room staff to know where students are going.”

While some students echo this sentiment, other students don’t feel that way. India Allar (‘21) says, “We have plans for escape in case something does happen, and a few of our teachers would go over them with us time and time again. I feel pretty safe with those plans.”

Abigail Travis (‘19), says, “It’s unnerving that some students don’t know what the plans are and others do. Everyone should know exactly what to do and have practiced what can be practiced.”

Senior Stephen Padilla (‘18) says, “I feel like the school has done a bit for the safety for the students; however, there is more than can be done. We have been locking doors recently and we have an on duty police officer patrolling either the hallways or the school grounds. I am aware that the school handed out a supply bucket to the teachers, in the event of an emergency; however I do not think that they were ever officially explained or practiced with the students. Personally I do not live with the fear that I might get shot at school or have a violent crime be committed in my school, but I would like to see more of a plan in the case of an emergency.”

Anderson urges everyone to follow the “see something, say something” rule. “We don’t know about threats unless we’re told. When people make us aware, then the school can follow up and make sure everyone stays safe,” she said.

- Katie Applequist (‘18) is a second year member of the Viking Vault and is Entertainment Editor.

Younger generation addicted to generations of IPhone
By: Megan Castle
​
NORTHRIDGE- High school students are connected to their iPhones, no matter the problems they face with them, because they keep them connected with friends and social media.

“They hold precious memories through your countless pictures and give you the availability to connect instantly with anyone, just about anywhere,” iPhone 5s owner Sydney O’Hara (‘19) claims.

But is all of this power distracting teens from school work and the realities of high school? IPhone 7 owner Alexis McMullen (‘19) seems to think so. When asked if her phone is a distraction to her during class, McMullen said, “Yes. Class is boring and I’d rather be talking to my friends.”

IPhone 6 owner Olivia Good added, “Yeah, I’m always having some sort of conversation with my bestfriends on Snapchat.”

When asked about why their phones seem to be such an addiction and important part of their daily lives, Good said, “Your iPhone can make you connected to any answer you are looking for and connected to almost every person who means something to you.” After being asked about what the best part of the iPhone is, Good and McMullen both responded that they love their cameras, which make it possible to capture just about any moment they want to remember.

I-Phones do, however, have their daily problems, according to O’Hara. “Nothing ever wants to load and since I have an older generation phone, sometimes it pops up on my screen that there is no SIM card entered, which is annoying and I am constantly having to restart my phone. It can become super inconvenient.”

McMullen also agrees that her phone glitches sometimes and after the most recent update, the letter ‘i’ is messed up and after typing it, it gets replaced with different characters. “The phone is very expensive for the amount it is constantly glitching and exiting me out of things,” she said.

Good says, “My iPhone is so slow sometimes, and it is usually after updates. Also, I will be logged into snapchat and it will randomly kick me out or lock my phone up.”

O’Hara said she had never owned another phone besides her first flip phone, which she says she would obviously not switch back to. McMullen, who has the newest iPhone of the bunch, commented on Androids: “Mine was awful. It took minutes just to send a three-word text to anyone because of how slow and glitchy it was. Androids in general are just not good compared to Apple products.”

Overall, the three girls with three different generations of iPhones agreed on the same things throughout their interviews: high school is a time to make memories, and in this generation you have to capture them on your snapchat, right?

- Megan Castle (‘19) is a Photo Editor for The Viking Vault. 19mcastle@northridgevikings.org 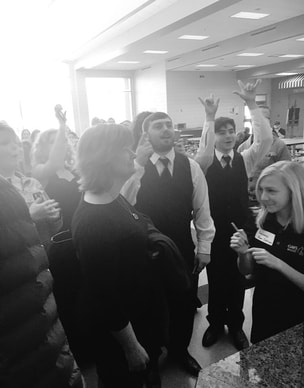 Choir students reacting to all ones. Photo by: Superintendent Scott Schmidt
Choir to states
By: Cole Fox

NORTHRIDGE- Northridge High School’s Choir has been making improvements, to the tune of qualifying for states three times in the past four years.

This year the choral group changed class and went to “large” group and qualified by scoring straight ones for the second year in a row. They will compete at states on April 20th and 21st in Gahanna, where they hope to receive straight ones again.

Choir Director Mrs. Jody Hepp said she is very proud of the students in Vocalise and Select Choir for their hard work this year. In the next few weeks, students will work very hard on song selections for state competition.

Gabe Miller (‘18) states, “I am excited! We have the chance to get a 3-peat. We have worked so hard, and it has definitely paid off.”

Many choir members said they love the rewarding feeling when the choir scores ones in their evaluation by judges because of how hard they worked to achieve that combined with the joy of sharing great music with the audience.

Hepp states that “the kids are wonderful, and they always work hard.”

For seniors, the state finals will be bittersweet because it marks their last performance there in high school, and they say they hope they can go out with a bang.

Tori Strong (‘18) states, “As a senior, it feels good knowing that we are going to states, and it is great to see everyone working so hard to make this year go well.”

Hepp states, “The seniors are the first class I taught coming here, so the emotions are definitely bittersweet.”

Anyone planning to venture to state competition at Gahanna  High School should remember not to use cell phones during the performance because it could actually cause the choir to be disqualified.

- Cole Fox (19’) is a first year staff member of the Vault and Sports Editor.
End of the year test schedule
By: Katelyn Darby
​
NORTHRIDGE- As the end of the school year approaches, students will have a full schedule of tests. The ACT held for Juniors has already been completed, but there are still many end of the year tests to come. For the rest of the year, tests will be held almost every week.

These tests will include the state standardized AIR tests, which give students the ability to accumulate points by getting the necessary scores for graduation. These will be held in the core subjects: Math, History, English and Science, and will take place over the course of two days for each subject.

The Post-assessments and final exams will follow the normal exam schedule: periods 1,4, and 5a on day one, periods 2,6 and 5b on day two, and periods 3, 7, and 5c on day three. Students can get permission slips to leave school early after their last test of the day as long as they have no missing assignments. Permission slips are due before the first day of testing.

May 5th- AP US History exam 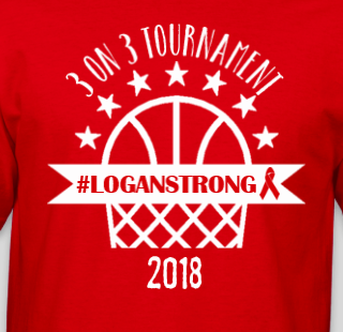 Cost of general admission will be $2.00 per person. Teams will consist of three people (of any age) and it will cost $30.00 to create a team. All money will be given to the family of Northridge alumni Logan Garee.

“Teams are encouraged to create appropriate, fun names and have fun while playing,” according to student leadership member William Cox (‘18).

All regular basketball rules will apply, and games will be held on a half court so two games can run at once. The games will be self-officiated. The first team to 11 points by two and three point shots will win the game.

If a person tries to make a basket and misses, but gets fouled in the process, the team will receive one point and gets the ball back. If one makes a shot and gets fouled, the team will get the shooting points (two or three points) and one more point for the foul.

When the ball goes out of bounds, players should take the ball back behind the three- point line and bounce or throw the ball back into the game. The final four teams and championship competitors will play to 21 points by two and three point shots.

“It’s a really great way to get involved in the community and support a great family,” says Kristen Grow, Student Leadership advisor.

Forms to join the 3 on 3 tournament can be found through this link: goo.gl/4cCtcz

If you have questions, please send an email to kdgrow@gmail.com

“I really hope a lot of teams come out to support Logan and his family,” says junior Mandy Shults (‘19).

T-shirts will be available on a first come, first serve basis at the tournament. Shirts will be $15 each. The concession stand will be open and have chips, nachos, popcorn, chicken sandwiches, hotdogs, candy, pop and water available.

If one is unable to participate in the tournament and still wants to contribute to the cause, donations and check will be accepted by the Crossroads Christian Church to benefit the Garee family.

Megan Trainer (‘18) says, “Everyone is able to participate. The more the merrier.”

Kim Garee, teacher and aunt of Logan Garee states, “Many years ago, Northridge used to have 3 on 3 basketball quite often. Those events were a huge success and I hope the same goes for this tournament.”