NORTHRIDGE - Expectations of life at Northridge High School don’t always turn out to be reality. Freshman anticipation gives way to real experience as the years pass. Here, some seniors reflect on their years at Northridge.

Clay Nicks (’15) shared his memories and thoughts of his time here at Northridge. He talked about freshman year and said, “Well, freshman year I had no idea what to expect, honestly. It was a little nerve racking being bottom of the food chain again, but it was a good year.” He then went on to say, “Sophomore year was alright. I expected a little more than I did freshman year since I kind of had an idea already. It turned out to be a fun year though.” Then he continued and said, “Junior year was fun, too. You had prom to look forward to, and towards the end of the year I was ready to be a Senior.”

Then senior year came around. He said, “I expected this year to fly by, which it has. All throughout high school I thought graduation wouldn’t come soon enough, but now that it’s here I don’t know what to think. It’s gone by crazy fast.”

Katelynd Havice (’15) reflected on her sophomore year being the year that she found friends that would last her a lifetime. She said, “I found great friends that year and they made my years here memorable and fun.”

Mikaela Pankuch (’15) said that her freshman she expected, “to be intimidated by the upper class, but then I realized that high school is more individual-based, and you can do your own thing.” She then said, “Sophomore year was just a step up from freshman year. You aren’t a part of the upper class but you also aren’t just a freshie anymore. You’re just there.” She then went on to say, “Junior year was the hardest year in terms of classes, and it’s also a year when you find out who your true friends are.” She explained senior year and said, “Senior year flies by, and before you know it there is a month before graduation.”

Hunter Adkins (’15) shared her times and thoughts about her experience at Northridge. She said, “Freshman year I didn’t know what to expect, but I was nervous about being at the bottom again. I did like having Homecoming and being in the student section.” Then sophomore year was just a blah year; there wasn’t really anything too exciting that was different from freshman year.” Then her junior year she had a lot of fun, saying “that year everything was fun. Homecoming, football Friday nights, being in the student section. I loved all of it that year. The only thing I didn’t like Junior year was my course load. It is the year where you have tough classes, and it also makes it or breaks it about college.” Senior year flew by for her, but she has tried to enjoy it because she knows that her life is about to change because of going away for college.

The years at Northridge are something that these seniors will always remember, and the memories they have created will last a lifetime.

NORTHRIDGE - Students are encouraged to remember to be safe during the junior and senior prom on May 23, at the Cherry Valley Lodge, in order to prevent any potential tragedies.

“Prom is a time to have fun, but safety is always the number one thing,” says Principal Amy Anderson.  There are several areas where you can make slight adjustments to your prom planning in order to stay safe. Firstly, keep your health in mind as you are preparing for the big day. Many people decide that they would look best in their prom outfit, whether a dress or a tux, by shedding a few pounds. “You can look thin for prom but still be healthy,” says Megan Dalton (‘16). “Just be sure to eat a healthy amount and work out regularly, but don’t overextend yourself.”

Many people believe that in order to look their best for prom they have to also be tan. “It’s okay to be a little tan for prom,” says English teacher Devoni Murphy. “You can be tan without actually tanning; try using tanning lotions or professional spray tans. Be sure to follow all directions and read the warning labels of any products you use in order to prevent any skin, eye, or hair damage. If you insist on going tanning before prom, only go for a few sessions or just sit outside in the sun for awhile.”

A common complaint during prom is that people are unbearably uncomfortable. “The most important thing to remember when you are getting ready for prom is to make sure you’re going to be comfortable,” says Gabrielle Evans (’15). “Wear shoes you can walk in and a dress or tux that you can breathe in.”

McKenzie Messer (‘15) noted that, “You really need to bring extra deodorant to prom and just keep it in your car. I promise you will get sweaty, and without deodorant you and everyone else will be miserable.”

“Another good way to stay healthy and safe during prom season is by avoiding stress whenever possible,” says Messer .

“Plan ahead of time for everything you will need,” commented Jeb Board (‘16). “Make sure you have plenty of money, and that you have your tux or dress order plenty of time in advance.”

“It is super important to schedule your hair, makeup, and nail appointments way before your actual prom day. If not, then the person’s you want to do your hair schedule may be filled completely and you will be super stressed out, urges Bunstine.

“ Don’t get in any fights with friends around prom,” says Messer. “This time is supposed to be fun, and if you’re spending your time stressing about a fight with your friend, then you won’t enjoy it at all.”

“Safety plays a big role during after prom as well,” says Murphy.  Some tips to stay safe and healthier, but still have fun after the dance are to just say no.

“It’s important not to give into peer pressure, especially during prom time, whether it’s about drinking, driving, or doing anything out of your comfort zone,” says Bunstine.

“Never get in a car with a driver who has been drinking,” says Murphy. “And remember to never drive if you’re under the influence yourself.”

Anderson commented that “all students have the knowledge to know right versus wrong, even during prom time. Be careful not to get too caught up in the moment; enjoy yourself, but also don’t do anything to put yourself or others in danger.”

Several high school students and staff members will be wearing their IPROM t-shirts the day before prom. These shirts are a wearable promise that state that the students attending prom will be safe during the big day and will return on Monday.

-Aili Barbee (‘16) is the Junior Editor-in-Chief and a staff writer of The Viking Vault.﻿ 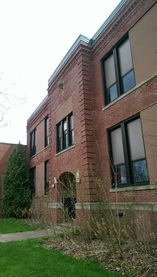 Photo by Kyle Stermer
Lost in time
What happened to the Homer Elementary time capsule?

NORTHRIDGE - I must have stood there and watched them bury it – a time capsule full of what life was like for young Vikings in the dawn of a new century. I just don’t remember where they buried it.

Almost 10 years later, the Homer school still stands, but no one attends, and memories from the school are slowly fading away as time goes by. Only vague memories remain, and one of the most interesting one is the time capsule.

Many people remember it, but not many remember much about it. When I spoke to Ms. Anderson, she didn’t know anything about it, but pointed me to Mrs. Stainbrook, a former teacher at Homer. When I contacted her, she immediately recalled the memory, but again did not know many details. She was a tremendous help, contacting other teachers she thought might know something about it. In the chain of emails that followed, I was able to gather some more information.

Mrs. Stainbrook thought she seemed to “remember that we did this as part of the closing ceremony for the school.” As further emails go on, the details get a little juicer.  Deb Peterman seems to think the time capsule is located “outside on the playground by a tree.” I hoped I would have gotten more, but even so it was nice to know I hadn’t just imagined the entire thing.

I decided to talk to a couple of students that went to Homer to see if they remember anything about it. I first talked to Kaycee Campbell, and she said she definitely remembered it. She recalled that “every kid for every grade had to make something to put it in, and my class made letters.” Another student, Maddie Parill, recalls that “I just kinda remember that everyone had to do it.” One student even claimed to remember them burying the time capsule, and most importantly, where it’s at. Because the property still belongs to the school, I’m hesitant to publish that location.

When students think back to the time of their elementary years, the old Homer, Hartford, and Alexandria still have a special place in all our hearts. Vikings seventh grade and up can remember attending elementary school in those separate buildings for at least a short time, before the elementary was consolidated with grades K-3 at Alexandria and grades 4-5 in the rented modular building on the main campus.

The Homer and Croton schools were abandoned for educational purposes due to safety concerns. Croton ended up buying the Hartford school for $6,001 and have used it as a community center for many different events. As for the Homer school however, it sits alone, abandoned, a shadow of what it once was.

When Northridge decided to consolidate its district in the year of 07-08, students and parents were told very abruptly. I remember sitting in class in fourth grade, when the superintendent came in and told us that next year we would be going to school in the “pods,” as many people call them. Many students were upset, as they had been going to that school for as long as they had been in school, and moving into an unfamiliar school with many people would not be very exciting. Teachers moved classrooms, many teachers retired, and others moved to the new pods.

So, now what? Truthfully, I’m not really sure. I hope to be able to address the board and maybe get permission to find the capsule and have it moved to a more secure place, where it can be opened in the future.

I took a walk around the old school the other day. It looked like any other abandoned place, boarded windows, and the inside halls lined with trash. But for many, it’s more than that; it was a significant part of their childhood, now lost in time beneath the ground.