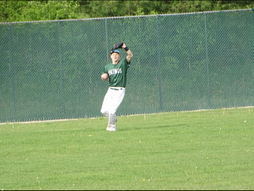 Jackson Wilson(‘19) makes a catch in centerfield against Granville. Courtesy photo.
Baseball wrap up
By: Alex Hook
NORTHRIDGE- The baseball team will play in the first round of the Sectional tournament on May 14th, at home, against Marion Pleasant.

One of the Vikings' leaders in both pitching and hitting this year has been Jackson Wilson(‘19). When Wilson was asked how felt about the season, he said, “We have faced really strong teams this year and I’m happy with the way he performed against said teams.” Wilson went on to explain, “I think beating Watkins and Lakewood really showed us what we are capable of and that we can play well on any given day.” Lakewood was outright LCL champion and Watkins finished third in the LCL Cardinal division this season.

Wilson is among the team leaders for earned run average, ERA, with a 1.90 and is the team leader in batting average with a .432. Wilson stated, “I am really happy with the way I have performed this season but I can’t get complacent, and the only thing I’m worried about now is how well our team does for the rest of the playoffs.”

The Vikings will face Marion Pleasant in Sectionals on Tuesday at home. Coach Jeff Wilson is really excited about this upcoming postseason. Coach Wilson explained, “I believe that we can make a very deep run in this year’s tournament if we play show up to play every day and we come out playing hard.” Coach Wilson’s motto for the boys on the team this year has been to ‘get sassy.’ “I really want our team to play with confidence and that is the motto that I thought would best suit that idea.” Jackson Wilson said, “that is the motto that we have lived by this season and it gets us fired up every game because we have invested in that motto as a team.”

When Coach Wilson was asked how he felt about the season he said, “I am really happy with the way we have performed as a team this season.” He went onto say, “we really have played a tough schedule this year and I don’t think our record represents how good we are this year. Teams may go into the tournament taking us light because of our schedule but we are not a team to take lightly. We have been in a lot of close games this year that just haven’t gone our way and if some of those games go our way our record may tell a completely different story.” The Vikings lost three of their last five games from giving up runs in the last inning.


Wilson said, “I have really enjoyed this season as a whole and it is crazy to think that it is almost over. I think that our team has looked really well heading into the tournament because we have started to find a spark here as of lately, and I’m excited to see what the tournament entails.”

- Alex Hook (‘20) is a Sports Editor for The Viking Vault 20ahook@northridgevikings.org 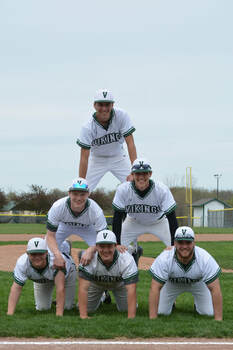 Photo of the senior baseball players. Photo Courtesy of Mrs. Wilieke
#lastonebestone: saying goodbye to NHS Baseball seniors
By: Sarah Phillips
NORTHRIDGE - The baseball season is coming to a quick end, but this year the team contains six seniors, most of whom have been playing together since T-Ball: Carter Comisford, Kody Everts, Zach George, Jonathan Nye, Alex Rosshirt and Jackson Wilson. The boys have been looking forward to this year since they were determined to make it the #lastonebestone.

Baseball in the LCL is at the height of its competition this year, with nearly every team evenly matched with the Northridge baseball team; yet, Kody Everts (‘19) still believes they have “mad potential.” Because the competition is so stiff, the baseball season has been full of ups and downs, but the team is always competing. Jackson Wilson (‘19) believes that they are ready more than ever for tournaments and will be a driving force in postseason play.

Not only is the baseball team competitive; the team is full of friendships, memories, and has a great team chemistry. The team has fun together on and off the field from having their coach, Jeff Wilson, buy them wings after games, bus rides after games, yelling in the dugout, and the annual home run derby with the softball players.

Baseball has been a huge part of each senior’s life, regardless of how many games before them in their careers. Most have been playing since they were four years old. Their summers have been filled with playing travel baseball since they were twelve years old or even younger, going from city to city - even to different states - every weekend. Here, they made some of their best memories and best friends while staying in hotel rooms, waking up at six a.m to get to a game on time, or playing games.

The seniors can’t believe that their time together is almost up. Considering they have been playing together since T-Ball, it’s “bittersweet” says Rosshirt when talking about Senior Night that happened in late April.

Even though not all the seniors are going to continue their baseball career after high school, they are all grateful for baseball and all agree that it has taught them different things to take with them such as: composure, to never give up, team work, hard work, patience, and much more. As a group, they say they believe these things will help benefit them after high school wherever that path might take them.

-Sarah Phillips is the Entertainment Editor of the Viking Vault ​
Offseason to factor in fall success
By: Cole Fox
NORTHRIDGE - Last season, the football Vikes didn't start off the greatest, and that played a huge factor in our boys only placing 3rd in the Cardinal Division.

“The key to having a successful season starts with the work and commitment put in through the offseason,” said running back Dylon Parman (‘20). The Vikes put in exceptional work and effort the last offseason, but it didn't transfer onto the 2018 field.

The Vikings’ biggest challenge this offseason will be keeping guys committed to the offseason workouts, including the underclassmen. “It's imperative that everyone is at the workouts,” said linebacker Jake Reese (‘20). Reese added, “Being in that weight room not only builds team chemistry but gets your body ready for the upcoming work in the summer.”

In addition to continuing the commitment of the younger guys, the team graduated key seniors this past season, and those guys were leaders. “In order to have a good offseason, you have to have strong leaders that are not only bettering themselves but encouraging and making sure everyone is completing their workout and not cutting the team short,” said specialist Brian Krehel (‘20).

Despite graduating those previous leaders, the Vikes are recovering fast, as most soon-to-be seniors have been a part of this program since 8th grade. In addition to the class of 2020, the incoming juniors have some leaders as well.

Football players have been lifting since December first, and turnout has been outstanding. The last two years, the Vikes have had awesome offseason workouts, with average numbers ranging from 18 to 23 guys, but as soon as December hit, the players regrouped and were back to work with numbers in the upper 20s, lower 30s. Quarterback Travis Neumeyer (‘20) stated, “Last year was the first year I’ve played since middle school, and the offseason played an important role. The numbers mean everything, and that's mainly due to the successes we had in the 2017-2018 season.”

There are some interesting new additions to the offseason workout program, starting with the all-new lifting program introduced this past winter. The Vikings are partnered with Volt Athletics, which is an app accessible on your cellular device. The Volt app personally calibrates a workout catered to your strengths and muscle endurance. All the workouts have been designed by a group of professional strength and conditioning coaches from some of the top universities in the country. Adding onto the Volt App, the Vikes will begin “non-mandatory” practices the week after school. They will be doing a series of conditioning drills and weight training up until July, when camp days kick in. New practice equipment is in the works, and the Vikings have already received new tackling dummies, as well as re-conditioned helmets.

In addition to the new equipment, the Vikings have acquired a new Receivers Coach, Chance Nelson. Nelson is also an English teacher for Northridge High School and a Middle school track coach. Nelson said, “I'm excited and I believe coach Jay Campbell has a great plan and clear thought on how this offseason should go. I trust Campbell, and he has justified everything, along with a great coaching staff to back him up.” In addition to Nelson, Defensive Coordinator and D-line coach Mike King stated, “The offseason is the most important part of football. Not showing up is hurting the team and  hurting yourself - if you aren't at offseason workouts, you should be embarrassed.”
​
- Cole Fox (‘20) is a Sports Editor for The Viking Vault​
Powered by