THE VIKING VAULT
Prom is here!
By: Mackenzie Holder

NEWARK - Saturday’s Junior/Senior Prom will be held at The Skylight in Newark for the first time this year. The renovated venue boasts wood features throughout, and the front room has an enormous and elegant skylight for which the building is named. With a dining hall that can seat up to 400, flanked by enormous 15-foot windows, our eleventh and twelfth graders will find themselves with the perfect Prom selfie lighting.

“Parking is easy at The Skylight,” said Mrs. Grow, Prom Advisor. “There’s a lot right beside the building and plenty of on-street parking, and it’s all free.”

Jenna Denune (‘17) says the Leadership class has been working hard on decorations, which will include mason jar candle centerpieces and Chinese lanterns.

Like last year, there is no organized After Prom planned.

Natalie Neumeyer (‘18) stated, “I am excited to see how cute my date looks, but I am even more excited for the food.”

Food aside, TheGuardian.com estimates the average high school girl in the U.S. spends about $900 on Prom - mostly, of course, for the dress. For many, whatever they pay turns out to be worth it for the memories made.

Nikas Bluemner (‘19) stated “I am pretty excited for prom since  have never experienced something like that and it is the only time I am ever going to experience it.” Bluemner is currently a foreign exchange student from Germany, where he says they do not have anything like Prom.

The Skylight is located at 85 E Main Street Newark, Ohio 43055. Prom will begin at 6 and go until 11 p.m. Grow recommends students arrive between 5:50 and 6:15 p.m. Crowning of King and Queen will be first, followed by dinner.

-Mackenzie Holder (‘19) is  the Jr. Print Editor for The Viking Vault. 19mholder@northridgevikings.org 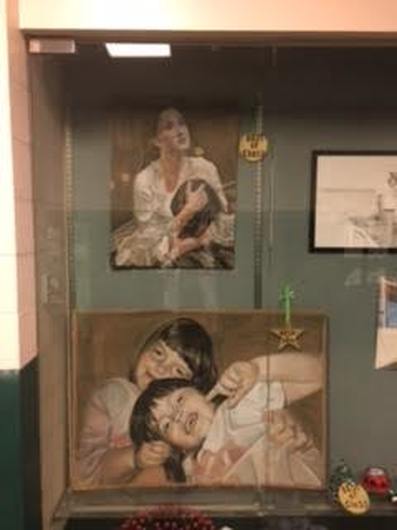 Sally Priest ('17) took overall Best of Show in last week's Art Show with her painting titled "Sisters." Photo by Caylee Lindsay.
​​Art show shows off talented students
By: Caylee Lindsay
NORTHRIDGE- The annual art show was held on Fine Arts Night on May 9th, displaying works of art from Drawing I and II, Ceramics I and II, Painting I and II, and 3D Design students.

The show also incorporated the work of middle school Advanced Art students, who were given the opportunity to take high school art classes before entering high school. Combined with high school work, the art show this year consisted of a diverse collection. Standout seniors were Sally Priest (‘17) and Alexis Humes (‘17), who had several pieces on display in the show. According to art teacher Andy Kirtland, “Every year the seniors usually stand out, but it’s hard to pick because there’s amazing kids in every age group.”

Students in Painting II got the opportunity to display their works on large cardboard canvases, a unique spin on the traditional smaller canvas that gets students excited about painting. According to Kirtland, many Northridge students attended the show to see the talent of their peers. “A lot of them are so quiet and reserved; people don’t realize how talented they are,” he says. Students who are usually shy and circumspect were able to express themselves through their art, speaking louder than words ever could.

Incorporated into the judging process this year were high school and middle school art teachers, and history teacher Elliot Wentz. Each judge was assigned a specific collection of work, divided between 3D Design/Ceramics, Painting, and Drawing.The awards have been different each year, uniquely designed by Northridge art students. First, second, and third place winners of each category were awarded ceramic medallions created by Ceramics students, as well as ribbons and a bag of candy.

Aside from a sugary incentive to showcase their art, it’s extremely important for young artists to display their work. “Why should you create art if no one will see it? The purpose of art is to create emotion; there is no reason not to show off your work,” says Kirtland.

Fine Arts Night was opportunity for many to showcase the overlooked talent of Northridge students. Attendees can agree that the Art Show was a worthwhile opportunity to support the interests of Northridge artists. 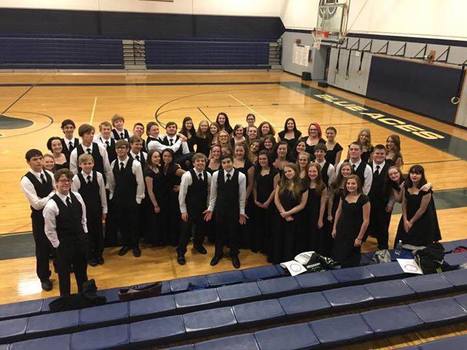 After the choir performed and the judges rated their performance, Northridge received straight ones, a superior rating, at state competition, just as they did at district competition in March.

Senior Sam Stanton, (‘17), says, “There are four classes we can sing in, AA being the highest, and we performed in Class C. Next year’s choir members are going to be singing in Class B!”

After watching the choirs perform, Choir Director Mrs. Jody Hepp says, “Judges base their comments on the choir’s tone, intonation (singing in tune), interpretation, and technique.” Choirs are judged on the specifics; think the ability to blend, balance, and match tone qualities. The posture, focus, breathing, contrasts in dynamics, and how well the choir expresses the meaning of the song are also taken into account.

The NHS choir performed a variety of different songs at the competition. Hepp says, “I’ve taught ‘Three Madrigals’ several times, and I was really proud of the way our choir performed them. They had the most precision and dynamic contrasts I’ve heard on those pieces.” The required piece for the district contest was “The Stars Are With The Voyager.”

“I think it was a breakthrough piece for this year’s groups. The choir really learned expression with this piece,” Hepp said. Another song NHS performed at the district competition was, “Ma Navu.” Hepp says that “Ma Navu” requires a lot of energy and excitement, which the choir worked hard to capture.

Senior Tatum McPheters, (‘17), said that she enjoyed every piece they performed because each one was unique, but her favorite song to perform was “Ma Navu.” Stanton (‘17), would agree, saying, “My favorite piece was ‘Ma Navu,’ which is a Hebrew song meaning, ‘How Beautiful.’ It was our upbeat piece, and we got to stomp and clap while performing it. And we sing that song so well!”

McPheters says, ”The hardest part of competition is probably the sight reading portion. At that point, your nerves have died down slightly, because you’ve already displayed your voices for the judges and it’s exciting.” Despite the nerves and rush of excitement experienced by many members of the choral group, you have to, “remain professional and stay focused,” as McPheters recommends. Stanton sides again with McPheters saying, “The hardest part about performing, for me, is sight reading. We are given a piece of music that we have never seen before, and we have to sing the song in solfège, (Do-Re-Mi). It’s challenging, but fun at the same time.”

​The group also received a plaque at state competition to honor their hard work and performance.

Stanton says, “We are one big family in our music department in general. Everyone, for the most part, gets along, and no one is better than anyone else. We are all equal. Even if you don’t get into the choir you wanted to, don’t quit! Just keep singing!”

McPheters credits the success and the feeling of family to Mrs. Hepp. “She is an amazing teacher and is such a kind person. She will be more than happy to talk with you and find the perfect spot in Northridge’s music department.” Choir can be a great experience and allow you to create many memories of your four years at Northridge High School. “It’s been the best part of my school experience. The last two years have been especially great because of Mrs. Hepp.”

To anyone thinking about becoming a part of Northridge’s music department next year, Hepp says, “There is a home for everyone in choir at Northridge! If you haven’t sung before and want to learn the basics, Concert Choir is a great place to start. Select Choir is our intermediate group. The music is more challenging and the focus shifts from basic skills, to tone production, blend, balance, and interpretation. Vocalise requires a more formal audition, and students are expected to have prior experience and knowledge. They learn more challenging music, are expected to learn more music in a shorter period of time. Vocalise members also add choreography to some performances throughout the year.” There are many spots open in the music department and if any students are having any reservations about joining choir, Hepp says, “Come talk to me! I want to help you figure out which group would be the best fit for you!”