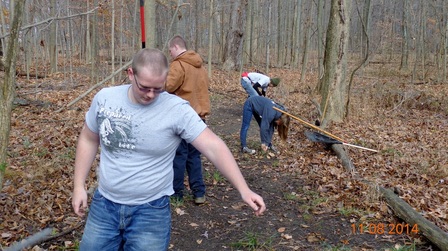 NORTHRIDGE – A new trail was blazed through the woods on the grounds of Northridge High School on November 8, 2014 through the hard work of Colin Evans (’16) and fellow members of the community.

Evans is in the process of working towards his Eagle Scout rank, and this trail served as the Eagle Scout Service Project required for this honor.

The trail will provide access to the outdoors for the Northridge Science Dept., as well as allowing other teachers to take excursions to the woods for educational purposes. It will also allow the school to host home cross-country meets, something that has been an impossibility in the past due to the lack of a course.

Evans, who has been involved with the Boy Scouts since he started in first grade as a Tiger Cub, is a member of Troop 560 based in Westerville, Ohio. Evans is currently at the rank of Life Scout, which is the last rank before Eagle. The Eagle Scout Service Project is the final requirement that he has to complete before he will be eligible for the honor of Eagle Scout.

“It will be really exciting as a cross-country team to have a measured course going over grass, dirt, wood, roots, track, and all kinds of other surfaces and terrain,” says cross-country coach Mrs. Kim Garee. “There are even a few swampy areas back there that will give the runners a chance to get used to running through mud.”

The trail measures 0.61 miles long and approximately 6 feet wide, allowing a lead vehicle for cross-country meets. It runs through the woods on the south edge of the property, near the FFA barns. Combined with the existing cross-country lap, the total course will measure approximately 1.25 miles. Several areas required the clearing of dead-falls and overhangs which could cause injury should they fall.

The trail will also benefit the Northridge science classes, giving them a marked nature trail that teachers can use in classes. Mr. John Morgan, AD/AP for Northridge, says, “It’s going to give the teachers a safe path that they can use for a change of scenery or to show students certain things outside of the classroom setting.”

Treasurer Britt Lewis said that the eventual plan will include mulching the trail to cover up some of the roots and the wet spots on the trail and prevent it eroding away.

-Mat Scott (’15) is the Web Editor-in-Chief and a Staff Writer for The Viking Vault.
Quiz Bowl starts back for the season
By Savannah Legg

Quiz Bowl is a trivia team that each high school composes of ten trivia-savvy individuals. The program itself was first organized in 1968, where local high schools compete against each other in matches, and eventually in a tournament. In a competition, a series of questions will be asked that contain trivia on arithmetic, math, world history, life sciences, fine arts, physical science, geography, U.S. History, and vocabulary. In a season, the Northridge team participates in seven matches between the months of January and February. After the matches have been played, the tournament will be held in March at OSU Newark against a team with a similar record. The Northridge team is composed of high school students from all grade levels. To make it on the team, you must take a test filled with general trivia. After all of the tests have been taken, the ten highest scorers will be chosen for the team. The Quiz Bowl team practices once or twice a week in the high school media center. Nick Willeke (15’), who is a member of the Quiz Bowl team, said, “I like Quiz Bowl because it allows me to challenge myself and learn new things.” Kaelin Curran (16’) said, “Quiz Bowl is fun because you get to travel to other schools and meet new people.”

-Savannah Legg ('16) is the junior photo editor and a Staff Writer for The Viking Vault.
Exams 101
By Gabrielle Evans

NORTHRIDGE- Midterm exams are fast approaching, and this has a tendency to cause high amounts of stress for students.

This year the exams will take place before winter break, on December 17,18, and 19. Exams on Wednesday Dec. 17 will be periods one, eight, and five. Thursday, Dec. 18 will be two, four, and six. Friday, Dec. 19 will be three and seven. Make-up exams will be held on Wednesday and Thursday, after the regularly scheduled testing periods. Friday will be an early-release day for students.

Student who can’t drive need to arrange for a ride if they want to leave early, says Principal Amy Anderson.

If students have a break in between their exams periods they will be required to go to study hall. Students are not permitted to leave until all of their exams are done for the day.

It is also very important for students to be on time for their exams, says Anderson. Students have been instructed to plan on being 5 minutes early so there isn't the chance of being late. If you are late, you will have to go to a make-up period and take your exam then.

“It is very important that you take the time to review because exams are over the first half of the year and most classes have gone over a bunch of information in the first semester,” says Anderson.

-Gabrielle Evans (‘15) is the New Editor and a Staff Writer for The Viking Vault.
Northridge FFA joining competitions
By Kyle Stermer

NORTHRIDGE- FFA, or Future Farmers of America, focuses on leadership and agricultural opportunities. This class is offered throughout America. It becomes available to Northridge students in the 8th grade.

When you take the FFA class, you are automatically considered an FFA member. This allows you to participate in FFA activities, earn different degrees, and even be a class officer.

The FFA class goes on many different field trips and does many different activities. The most recent field trip was to the Ohio State hockey game this past Friday. The FFA chapter went up, watched the hockey game, and then stopped by Raising Canes for food on the way home. Usually, they average on about one or two field trips every two months. Some of the past trips have included the Farm Science review, The National FFA Convention, and many other events.

In the FFA, there are many competitions that you can sign up for. These contests range in variety from Dairy Feeders, to Job Interviewing, to judging different types of cheeses by taste. These contests are free to participate in, and all transportation is provided by the FFA class.

Each month, the Northridge chapter has their official FFA meeting. The meeting usually starts out by a formal meeting consisting of voting on what events to do, and what to do with the money in the bank account. After the serious business is done, the group usually does something fun. For example, at the last meeting, there was a bonfire, and a haunted house.

Also, Northridge has recently purchased a large chunk of property on the other side of the woods. This is where the new bus garage is being built. (See the V3-I2 News Archive for more information on this topic.) The FFA is also taking control of one of the old barns and using it as their shop. This will hold all of their equipment for what they need to do. With the remainder of the property, the FFA plans to use the land to plant crops.

For those who aren’t in FFA would like to join, all you have to do is sign up for one of the classes. There are multiple categories, ranging from Animal Science to Agribusiness. It’s just whatever you feel would be a good class for your interest. If you have any questions, you can just talk to Mr. Weiss, who is the FFA advisor for Northridge.


-Kyle Stermer ('16) is the Interactive Editor and a Staff Writer for The Viking Vault.
Self Check-Out at the Media Center:
No-one to check out your book?
Long waiting in line to check out a book?
NOT ANYMORE!
Come to the library and check out your book
fromt he computer closest to the exit.
The directions are posted right next to the computer.
Ask Ms. Kelly for more information or for
a demonstration.
Powered by