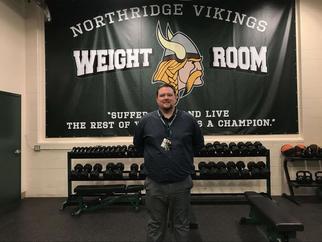 NORTHRIDGE- Coach Jay Campbell, who started out as our head football coach and special education instructor here at NHS, has now taken over the additional role as the new “coach” in the weight room.

“I am here for any coach who wants me,” Campbell says. “I saw it [this position] as an opportunity to help in all sports.”

He has recently started helping the track team with weight conditioning to prepare for their spring season. When Campbell was in high school, he participated in shot and disc for his school’s track team.

Campbell is using the same workouts that the last lifting coach from Ohio Health gave the runners.

Alex Chalfant (‘18), a track runner who has also experienced Campbell’s football lifting routine, says that Campbell is like a different person during track. “He’s a lot more calm and laid back during the track lifting sessions,” Chalfant says with a laugh. He says the intensity of the workouts are very different too. “I get why he’s using the old track routines, but Coach Campbell is really good at designing workouts. I honestly trust his judgment either way.”

Rex Bammerlin (‘20), who has been doing track since middle school, says he has had plenty of experience over the years with the traditional track weightlifting routine. He calls Campbell “a good coach.”

Lileigh Berling (‘20), a second year track runner says that Campbell always pushes her to do her best. “I was benching, and he encouraged me to lift a weight I didn’t even know I could! The workouts are slightly challenging, but they aren’t too hard.”

Richard Featheringill, head track coach, says he’s excited to have Campbell be a part of the track team. “He has experience in the weightroom, and I am hoping he will bring new athletes from the football program to the team,” Featheringill said.

The track team will continue to lift the entire season. “I hope to build off of the workout we are doing now and build the program,” says Featheringill. “From previous meetings it looks like we have a great number of athletes going out this year.”

The track team has conditioning Monday through Thursday every week, which includes lifting every Tuesday and Thursday. Practices begin on March 5th, and the team’s first meet will be March 24th at Watkins High School.

-Shelby Yorde (‘20) is the Assistant Print Editor of The Viking Vault. 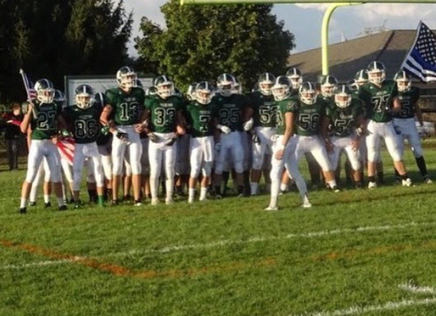 NORTHRIDGE - With the closing of the 2017 football season a few months ago now, the Vikings are still basking in their first winning record in over a decade. But the work continues.

The Vikings started lifting and conditioning on December first and have been working hard and pushing themselves ever since. Currently, the football team is in the weightroom about four times a week. They are working on getting stronger and encouraging kids to join, and more and more kids are showing every week.

Jake Reese (‘20) stated that, “We are working very hard in the off-season so that when the season actually comes, we are in better shape.”

The coaches are very excited about the numbers that they have in the weightroom. “Our goal is to continue to grow each year and get as many kids as possible interested and involved with our program,” said Head Coach Jay Campbell.

In the off-season of last year, there were about 15 kids in the weightroom for football, and now there is closer to 25 kids in there every day, working hard to get better. The Vikings numbers of attendance have increased day by day.

“I think the best part about our off-season workouts is the commitment level of the players and the coaches pushing us to give all the energy and strength so that we can increase maxes and build strength and endurance,” said Linebackers Coach Bryan Callahan.

Off-season lifting helps kids still feel like part of the team even though their season is over. William Cox (‘18) stated, “The off-season workouts are key to having a successful team, especially here at Northridge because what we lack in size, speed, and numbers we emphasize on commitment and work ethic and the coachiblity we have as a team.”

In past years, the Vikings have not had a great off-season. Last year’s off-season was the first time we saw a true commitment, and that was all credited to the senior class for pushing and taking charge of their senior year. The Vikings’ numbers of attendance have increased day by day. This year the coaching staff is implementing a new nutrition plan for the football team. It will help them be ready for the season when it comes. The kids will be in better shape coming into the season rather than getting into shape when the season is already in session. The football coaches have been hard at work getting ready for next year and making plans for the upcoming season.

Next year the team is going to work very hard and make it a great season, according to players. The upcoming seniors are ready to take control. Brenden Workman (‘19) stated that, “I am very excited for the upcoming season because I will be a senior and we as a senior class are ready to help mold the team.”
​
-Cole Fox (‘20) is a staff writer and Sports Editor for The Viking Vault. 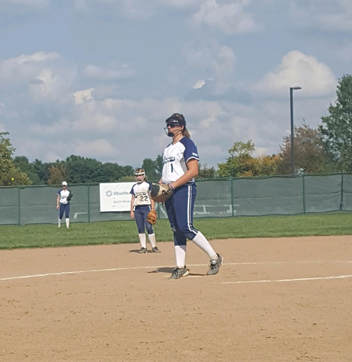 NORTHRIDGE - Alyson Quinlan, a 2020 pitcher, is one of the very few student-athletes who has the opportunity to continue her athletic career after high school, as she has recently verbally committed to play softball at the University of Indiana Purdue Fort-Wayne.

She has been heavily recruited ever since it became legal for college coaches to talk to her. Her head coach, Marc Thompson, said he can’t even quantify how many coaches have contacted him about Alyson. “Everytime we play at a showcase or any exposure event, someone asks me about her,” Thompson said. Quinlan is said to have taken unofficial college visits to the University of Indiana Purdue Fort-Wayne, Wright State University, College of Charleston in South Carolina, and Coastal Carolina University before making her decision to commit to play at IPFW.

As of right now, Quinlan holds down the starting pitching position for the Ohio Stingrays ‘02 travel softball team. She said that she is being recruited as a pitcher, but her secondary position is first-base.

According to Quinlan, her strengths are her power, hitting, and pitching, and she said her weakness is her running speed on the base paths.

Quinlan said that she started playing softball at the age of seven. It started when she saw a flyer for school softball in the hallway and then took it home to her parents. She asked if she could play, but her parents told her no, telling her that they wouldn’t like it. After a little begging, her parents finally said she could join the team. Quinlan started playing travel softball at the age of eight and has been playing ever since.

She grew up in a sports-loving family. Her mom grew up as a multi-sport athlete playing volleyball, softball, and basketball, and her dad played soccer at a young age and baseball until he was 14.

Quinlan fell in love with the game because of the things that it teaches her about herself. She likes how it teaches you “the best way you work as a person, finding the type of people you get along with, and also learning your limits as a person; like how hard you are willing to work and the level of adversity you can work through.”

Quinlan says that the hard work is now just beginning to start. Now her future coaches at IPFW expect her to continue to get better everyday, which will prepare her for the level at which college softball is played.

Quinlan said, ”Some pressure is off of me because I already know where I am going to college as a sophomore, but I can’t relax now. I still have to work to get better everyday.”

The recruiting process has brought a mixture of emotions, said Quinlan. “It has been very stressful and overwhelming because of all the things going on, but for those same reasons it has been very exciting; doing things like visiting Disney World, playing softball, meeting college coaches and having them watch me play softball,” said Quinlan.

Quinlan ultimately chose Indiana Purdue Fort-Wayne because she was impressed with their marine biology program, the strong softball program, and she said that it felt like her home away from home.
​
-Megan Payne (‘20) is the Assistant Web Editor of The Viking Vault. ​
Powered by