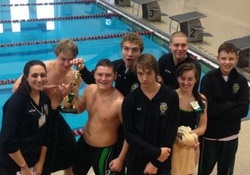 NORTHRIDGE - Rachel Furr is Northridge’s new swim coach. Furr
says she was interested in coaching a swim team ever since her career ended and also says is very fortunate that the opportunity came for her to coach here.

Furr swam for Brunswick HS, a Division I swim team, and had a
great experience. She was team captain and held multiple school records but says "my favorite part of swimming was my team." Furr hopes that the swimmers
at Northridge can have an experience as great as hers. She made many friends,
and still stays in touch with them today.

After Furr finished her high school swimming career she went to
college at Ohio State, and got a degree in mathematics. Furr helped her own high
school team during the summer when she was home from college, and she coached at
Lifetime Fitness in Columbus. Furr loves sharing her knowledge with young
swimmers.

Already this season Furr says the swimmers are great, and she has
seen hard work from all of them. She says all the swimmers have personal goals
set for themselves including dropping time in their specific events, breaking
school records, and qualifying for post-season meets. Furr’s goal as a coach is
to help all of them achieve their goals.

Along with personal goals, Furr and the team have goals they want
to achieve this year as a team including being faster, stronger, and smarter
about the sport. Furr says “However, the most important goal is to achieve a
quality sense of team unity.” Furr stresses the importance of team unity, and
says it’s a major part of practice. The team is practicing every night for two
hours and also does weightlifting to prepare for their meets.

Furr’s goal was to be a math teacher and a swim coach, so she is
half way to her goal by accepting the job at Northridge. Furr’s final message
was “Along with my knowledge of the sport, the team's hard work, and the
dedication of parents we are going to have a great season, and I am very excited
to be a part of it!”
Megan Hatfield is the Features Editor for the Viking Vault. Photo Credit: Lisa Dean-Hibbett

NORTHRIDGE - Evan Wilkoski hits the slopes soon to start off the snowboring season.

Junior Evan Wilkoski has been snowboading for 11 years now. His dad got him started when he was really young, and it took him a while to get into it because he was so young.

Wilkoski has never done any serious competitions, but he is interested in doing them "once I get out of high school." He says the reason he has not done any now is because he doesn't want to risk the chance of getting any injuries.

When asked what his favorite move was, he responded, "I really like getting big air and board grabs of any kind is awesome. So that's my favorite that I can personally do, but in my opinion the best trick is the rodeo flip for sure."

Wilkoski's normal 'practice' is a whole day spent on the slopes. He ususally goes up to Snow Trails on a Sunday morning and rides all day until they close at 10.

"I do have friends that do snow board, but the one that I hangout with when I go to Snow Trails is Jake Neff because he keeps up with me and doesn't crash a lot," he says.

Wilkoski has traveled to other states to snow bored but says he would really like to travel to Colorado or California. He has relatives that live in both of those states, and next time he goes and visits them he says  "it would be nice to take my board with me and take a trip into the mountains for a few days."

Evan has only been in one serious wreck in his 11 years of snow boarding. Here are Evan's words as he explains what happened when he broke his collar bone: "So freshman year I was at snow trails and it was towards the end of the season in February, and they set up a race course that is sponsored by Red Bull, and it's a lot of fun. Dustin Sheinburger and I were racing, and it was late at night so the sun from earlier that day had melted the top layer of snow. Now that it was night, the snow froze again into ice. Dustin and I were on one of the final turns and he cut me off (not on purpose) and the back of my board
caught on the ice, and I began to fly backwards through the air at full speed. In mid air I tried to flip myself back around, which now I really regret doing because when I finally landed, I landed on my shoulder. After sliding for a few feet I was run over by Dustin's little brother (once again not on purpose). I knew that I had to get off the course as fast as possible or I was going to get run over by someone else again and this time It would really hurt, so I unstrapped my board and walked over the banked turn and began to walk down the hill. I could tell something was wrong with my left arm because I could not move it at all. All of a sudden I got laid out again. This time the person who ran over me was probably  250 pounds. I asked him if he was okay, and then I don't remember anything after that. Turns out I broke my collar bone and after that I had no control over my left arm for five months until it healed, so that was a good time."
Gabrielle Evans ('15) is the sports and extras editior for the Viking Vault.,

By Trevor White
NORTHRIDGE - If you could think of any unsung hero of your school, who would you think of? Probably the janitors, teachers, and the secretary, right? Well apparently you’ve never sat down and had a conversation with our school lunch ladies. I was able to talk to Sue Garrabrant about being a lunch lady, and when I left I was truly surprised at the amount of work it takes and the sacrifices to be a cafeteria staff worker.

When asked about the food they have to serve, Mrs. Garrabrant said she wishes there
weren’t restrictions. “I don’t blame the food," she says about new federal laws regarding foods served in public schools. "A cookie isn’t going to cause health problems; the issue is kids being lazy.” With regulations in place where kids can only have so many calories in their lunch and each lunch must contain a certain food group in a certain moderation, it causes their job to be much more difficult than it used to be.

Although you may think the school controls the lunch budget, that’s entirely untrue. The cafeteria workers have what’s called an “open budget,” or a budget which they control entirely. From buying new appliances, buying supplies, and paying wages, it is completely up to them to get it all sorted out. The only thing concerning money that is out of their hands is the price of the lunches, which is regulated by the government.

So next time you think about not thanking the ladies who work very hard to serve you
lunch everyday, thank them because they deserve it.
Generation Gap explains some staff-student tension
By Zach Hossler
NORTHRIDGE - The personality variations between the teachers and students change drastically depending on the age difference.  A difference in interests, attitudes and personalities that changes over the years is known as "the generation gap."

The generations of Northridge high school staff and students include the Baby Boomers, Generation X and Millennials.  The students (millennials) and the staff generally cooperate well together, but there are a few instances where they do not.

The differences in the generations are what make each one unique.  The millennial generation has much more experience with and relies more on technology than the earlier generations.  The millennials are also distinct in that they are known to be less obedient, though Mrs. Garee points out that all older generations have always, always called younger generations "wild and disobedient," all the way back to Bible times.

The Baby Boomers and Generation X are not as reliant on technology but are known to have more “common sense."  These two generations are also known to be more obedient.

The differences in the generations are what cause them to “butt heads” every once in a while.

The biggest social difference between the generations was the invention of social media and texting.  Mrs. Grow stated that “there was no social media, you had to hang out" back when she was in school.  This could be why older generations are more inclined to deal with their problems face to face instead of arguing over social media.

The older generations also tended to be more active and enjoyed the outdoors.  The newest generations like to play videogames on computers.  Mr. Riley remarked how he use to “spend time outside riding bikes, and playing backyard sports with his friends”.

The career options have even changed along with the interests in careers.  People of the millennials are more likely to want to work with computers or go into the medical field.  Mr. Riley stated, “Back then kids wanted to be police officers or firemen ... the cool jobs”.

The generation gap can at least partly explain the reason why there are times when students and teachers simply do not understand one another or get along.

Zach Hossler is a Senior Writer for the Viking Vault.