The movie Instant Family stars Mark Wahlberg as Pete and Rose Byrne as Ellie, a couple that spends their time flipping houses and selling them. One day they decided they really wanted to flip a house and start a family. However, this is not the typical family you’re thinking of. They were determined to adopt a child from foster care and began by going to classes for adopting a child. This later led them to the Child Fair that the foster care puts on, where you meet at a park and have a connection with a child. Pete and Ellie's plan to start a family wasn’t so smooth though, as they ended up adopting a child who has siblings and, in doing so, adopted the other two. However, you'll have to watch this movie fully to even understand and appreciate it.

Have you ever pondered the idea of having kids? Well, there's more than one way to go about it. Obviously, you can have your own, but Instant Family celebrates the “other” way to assemble a family, through adoption. There are an estimated 438,000 children in foster care, ranging from ages 1-18 each year and of that number, only 29% get adopted and that's after 3 years of spending time in foster care, according to Childwelfare.gov. Most children spend on avg 5-7 years in foster care and while the percentage of kids being adopted has gone up, it still has a long way to go.

The movie is worth watching for your own family or even just by yourself. Its rated PG-13 and is about two hours long. I highly recommend it.

- Cole Fox(‘20) is a Sports Editor for The Viking Vault 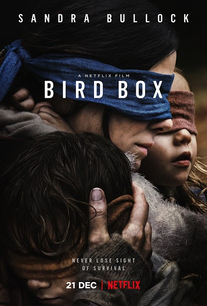 The official Birdbox photo.
Movie review: Birdbox
By: Lyndsey Stocks
NORTHRIDGE - The Birdbox is a film about a mysterious creature or force that causes people to die if they see it.

This unknown force swept through the world leaving only a few survivors. The survivors must avoid seeing the force or it takes the form of their worst fear, forcing them to ultimately commit suicide. The only way for anyone to look outside or be able to leave the house was with a blindfold on to cover their eyes. Five years after the unknown force caused most of the people on Earth to commit suicide, Malorie and her two young children must embark on a trip down a river and through a forest in a search for safety in numbers. The entire journey must be done blindly in order to avoid looking at the mysterious force.

Sandra Bullock stars in the movie as the mother, Malorie Heyes. One tool utilized by the director to tell the story is a series of flashbacks. As Malorie and her children travel down the river, flashbacks to five years earlier help to tell how everything started. This was a very effective tool to show what this mother and children had been battling through for years just to be able to have a chance to survive.

Overall, Birdbox is a movie that people of many ages can enjoy, from students in high school all the way up to older adults. The film explores an interesting idea where people aren’t able to face their worst fears without killing themselves. Birdbox was initially released in November and is currently streaming on Netflix.

- Lyndsey Stocks (‘22) is the assistant web editor for the Viking Vault. ​21lstocks@northridgevikings.org
Powered by