NORTHRIDGE - Students are doing their best to raise money for 2017 graduate, Logan Garee. Garee, who got ill in August, was diagnosed in late fall with severe aplastic anemia, an autoimmune disorder that depletes his platelet and other blood counts. Garee has been undergoing treatment at The James Cancer hospital and may possibly receive a bone marrow transplant this spring.

Seniors Megan Royer and Addie Vankirk are selling white bracelets with the #loganstrong message outside of school to raise money, with help from members of the student leadership class. All the proceeds will go toward Garee’s medical bills.

“The slogan ‘Logan Strong’ really represents our school,” Royer said. “Everyone at our school is really Logan Strong because it is really everyone in the community contributing and trying to do whatever they can to help.”

Senior Cora Dorman even took the time to make her own bracelet more fun; she colored in each letter to make it more colorful. Many students have followed this, adding an even more personalized aspect to a community initiative.

Students in the student leadership class have other plans in the works to help support the former student, who just last year was raising money for community programs through the leadership class himself. They just keep coming up with new ideas.

“You can tell that this is something that everyone in the school cares about,” Dorman said. “While walking through the halls you can look around and see many students have those white bracelets around their wrist. Some students even have four or five of them up their arm.”

Family members of Logan from out of state have been placing orders for the bracelets. Some parents are even sending extra money with their kids so they can wear them, too. Currently, the group has sold around 300 bracelets. There is another shipment of 300 bracelets coming in soon.

The student leadership class also has plans in the works for a three-on-three basketball tournament outside of school hours. Students and others would be able to pick their team, and all the proceeds would go to Logan and his family. There will be T-shirts made that can be purchased for the tournament.

Students say they wanted to help Garee pay for some of his medical bills because they knew how expensive it could be. In January, Northridge hosted a blood drive in Garee’s name. He is in need of platelets. Students were able to give blood and say that they wanted it in Logan’s name as another message of support for him.

“There are many students at Northridge High school that were very close to Logan,” said Cole Fox (‘20).

“We want to make sure Logan is focused on getting better instead of he and his family stressing over medical bills,” Royer said. “The Northridge district is close-knit, and people here are always willing to help anyone who needs it. So stay tuned for what’s coming next as we keep trying to help with this good cause.”

-Mackenzie Holder (19’) is a Print Editor-in-Chief for the Viking Vault. 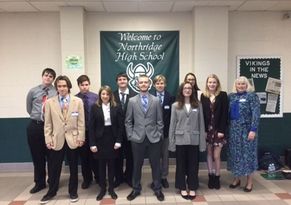 Here is how Mock Trial works: there are two teams at the trials, the prosecution and defense. There are four students on each team, with eight students in total. Prosecution is the team that charges the suspects with crimes in hopes to convict them. Defense is the team that defends the person being charged.

A witness name is just a made-up name given to members to make the trial more realistic. During the trials, a fake story is presented and the teams gather all the facts to form a question before the attorney asks the witnesses for their questions. The two sides compete against each other, and the judge decides the winner of the trial. They prepare for these trials by practicing the roles, evidence, and what the witness statements mean.

One student, Severns (‘21), a first year mock trial member, says, “My favorite part of mock trial is using the witness statements to gather facts because it’s challenging. Also, I really like how close the whole team is. At first, we hardly knew each other, and by the end, we were like a family. I would recommend anyone who is considering learning about law to do it. It’s so much fun and a great experience.”

Club advisor, Pokorni, says “This was a rebuilding year for us, with 6 of 8 performing positions being new to Mock Trial this year. Every team member learned something and grew in experience and talent.  We ended far stronger and far more knowledgeable than we started.  I am so proud of all of the team members!  They are a great group of kids and so much fun to work with. I'd love to see Northridge field two teams next year.”

Mock Trial begins early in the fall, and the season just ended in late January, after the teams fell short of advancing in the district trial. The Mock Trial team practices weekly from the beginning of the season until they get to their first trial, districts. When they do advance in districts, then they move on to regionals, then on to states. Although they didn’t advance, they plan on trying hard again to advance next year. Many team members plan on continuing to do this the rest of high school, such as Severns, who clearly had an enjoyable first year.

The Mock Trial team will pick up again next fall, in hopes of more members and advancing further in the trials.

-Darian Dick (‘20) is a Vault staff writer and Senior Spotlights editor.
Ridge looking forward to “sweet” new arrival
(photo to follow ASAP)
By: Alex Hook
​NORTHRIDGE- Kylie Sweet, Biology and Anatomy teacher, plans to take her maternity leave from school from March through May to be with her newborn son, who is expected to be born in late February.

​Despite being so close to delivery, Sweet is still showing up at school daily and performing her teaching duties.

Sweet says after the birth she plans to take off in early March and be back around for the end of the school season, in May. That should total around 12 weeks, and by the end of that time, she can leave the baby with a babysitter.

When Sweet was asked if she was ready for the baby, she replied, “I don't know if someone could ever truly be ready for such a life changing event. I am definitely excited and am doing my best to be prepared… but I don't think I'll really be ready for all of the changes.”

She also added, “[In the room] we have his crib, dresser, bookshelves, and some other furniture organizers.” Also, she commented about the baby clothes: “I've been lucky enough to receive many gently used hand-me-downs from friends and family, so I have gotten a lot! I've also received several new outfits during my baby shower.”

It almost seems like a scripted situation: the teacher that teaches about new life (Biology), and about the bodily functions of new life (Anatomy) having her own baby. However, she says knowing all about the science does bring hardships.

As an expert in those areas, Sweet knows about all the birth defects of a newborn children. As she states, “This is why I opted to get certain blood genetic tests like cystic fibrosis, just to be prepared if he does have a disorder. So far all tests are negative, but it is still scary!”
​
Most would think as a first-time parent, that this would keep her from wanting to teach about birth defects. Not Sweet, though. “She fights through it, and taught our class about a mitochondrial disease(most common at birth),” says Emma Garee (‘20), who is in Sweet’s Honors Biology class.

Garee also added, “[Sweet] may have gotten a little emotional during the class, but she powered through the lesson just fine.” This goes to show what kind of teacher Sweet is and how she values her other kids/students. She knows that her students needed to know about the disease, so she kept a focused mind and kept her thoughts from thinking about her son.


On a less serious note, Sweet explained in typical teacher fashion what the baby is wearing in her stomach: “[The baby] has a coat of downy hair called lanugo and is covered in a waterproof fatty substance called vernix caseosa (hopefully he will lose this before he is born… other than that he is ready to arrive in his birthday suit!”

- Alex Hook ('20) is the Assistant Web Editor for The Viking Vault.
Powered by