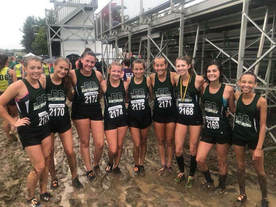 Picture of the girls cross country team, after a rainy race in the mud. Photo by a fellow runners parent, Dawn Dick.
NHS XC sets the Pace
By: Anna Kohler
NORTHRIDGE - The 2018 girl’s and boy’s Cross Country teams have been doing well this season. The girls have some top speed runners who have won many races so far.

This year the team is smaller than it normally is, so everyone is going to the races and competitions. All the runners started early in summer, making progress every practice to get ready for these races.

Jessica Koehler (‘19) says, “Having such a small team gives a lot of people time to improve; everyone is always running so as the season goes on people do really get better.”

Two of the top runners on the girls team are Megan King (‘19) and Olivia Ashbrook (‘21). Their average placing is either second or first place, which is important for the team when it comes to getting the overall team placing. So far this season the girls team has placed second twice but there are still five weeks of the season left, so it is still unknown if they will be going to Regionals.

Ashbrook says, “the running is hard, but in the end it is worth it because we place pretty well.”

Some of the runners have made the school records or have beat their PR during the 5k race. Ashbrook has the fifth fastest time in school history, and Nick Houk (‘21) has beat his PR of 17.59 minutes.

The small Cross Country team has worked hard this season and race every Saturday, as well as several mid-week meets.

- Anna Kohler (‘20) is the publicity editor for The Viking Vault 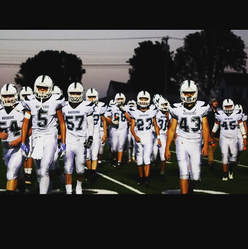 Northridge football team walking off the field after game at Lakewood (photo courtesy of Leisa Kain)
Football from inside the facemask
By: Cole Fox
It's a cool, crisp Friday morning, and my alarm had just gone off. It’s 6:15 a.m., and it's the day of the big game.

All night I'd been up watching film, noticing all the tendencies of the quarterback, making sure I’m prepared for tonight. It's now 7:00 a.m., and I'm finishing breakfast. As I pull out of my drive I start my game day playlist filled with songs to get myself hyped for the game.

I get to my teammate Brian Krehel’s (‘20) house. He hops in and we immediately start talking about tonight's game. That first game day Friday, I remember asking him if he was ready for his first varsity football game, and Krehel replied “I’m nervous but I’m sure once I catch that first kick I'll be ready to go.” We reach Rt. 62 and then head to the school. Once we reach the student parking lot and get out of our cars, we meet up with some of the rest of the team and walk into the school. Everyone is hyped for kickoff tonight, including the teachers.

We go to first period and about our regular school day however, always finding time to watch some extra film before class or during. After school I go home where my mom had made me food before tonight's game. After I eat I head to the school and into the locker room. I put in my ear buds and get myself mentally prepared for tonight's battle.

It's now 4:45 and Head Coach Campbell comes in, along with our other coaches, to talk to us about last minute reminders for tonight's game. After that, special teams goes out and does their pre game. At about 5:30 the rest of us head to the field we go through our pregame rituals and traditions and coach says a few words to encourage before heading back into the locker room.

Once we are back in the locker room, Coach pulls us together hand-in-hand, and we say the “Lord's prayer,” as we always have. Afterwards, Coach Campbell gives some words of inspiration and we go out and get ready to play. The band plays the National Anthem, and the student section begins to scream once the ball is kicked and returned to a certain point. Defense begins - we hit hard and hit fast. Sometimes accidents happen and you poke someone’s eye or twist their leg. When I'm on the field I settle in and focus on my job, which is tackling the guy with the ball. After the 1st half ends, we go to the locker room where the coaches tell us what were doing wrong or what needs to be changed.

We go into the second half and start on offense. I run the ball, making one guy miss and then hitting another while it takes three additional guys to bring me down. As we head late into the fourth quarter, we are down big but never give up. The clock ticks down to end and we’ve lost. After the game we clear out our lockers and head to our cars, all of us upset with defeat.

After the game, we go to Roosters, usually with student section and the team. After we eat I usually head home and fall asleep.

- Cole Fox (‘20) is a Sports Editor for The Viking Vault
​Alumni Come Back To Coach
By: Cole Fox

NORTHRIDGE - Alumni are important and also as special here as they are to most schools, but at Northridge its goes a tad deeper. Northridge has a small population of students compared with most schools; however, over the past few years we’ve still had some students come back and both teach and coach current students.

Smith now coaches football for his alma mater as a running back coach and special teams coordinator. When asked what it means to him to be coaching where he played, he responded “I love coaching where I played! It means more to me to coach here than any other program because it's home and there's a certain sense of pride that comes with that.”

In addition to coaching, his day is filled with special ed teaching at Pickerington Central. When asked what his favorite subject in school was, Smith reluctantly said Math. Smith has made such impact on players’ lives, so we asked him who is role model was throughout his life. He said, “My role model was my dad. I always remember wanting to be just like him when I got older.”

Northridge is also lucky to have teacher and coach Erin Rinehart, a 2013 graduate who cheered at Northridge. When questioned about her accomplishments she opened up with, “My biggest accomplishments as a Viking are cheerleading at the varsity level, which led me to cheer at the varsity level in college, and graduating from Northridge with a great education to do well in college, which led me to come back and give back to Northridge.”

“Coaching was something I've always wanted to do,” she said. “But to be coaching at Northridge means everything to me. The Northridge cheerleading program made me fall in love with the sport; it gave me the skills and confidence needed to cheer collegiately, and memories that will last a lifetime. To be able to give back at least some of what the program has given me, means everything to me.”

In addition to coaching cheer at Northridge, Rinehart also teaches middle school Math, which is not surprising since her favorite subject was Math. Rinehart says her biggest role model besides her parents was Mr. Boening, who was her Algebra and Pre-calculus teacher. “He had a passion for teaching, and a passion for math, which stood out to me. He made math fun, but I also knew that he cared about me as a person. He is the one who inspired me to be a math teacher.” 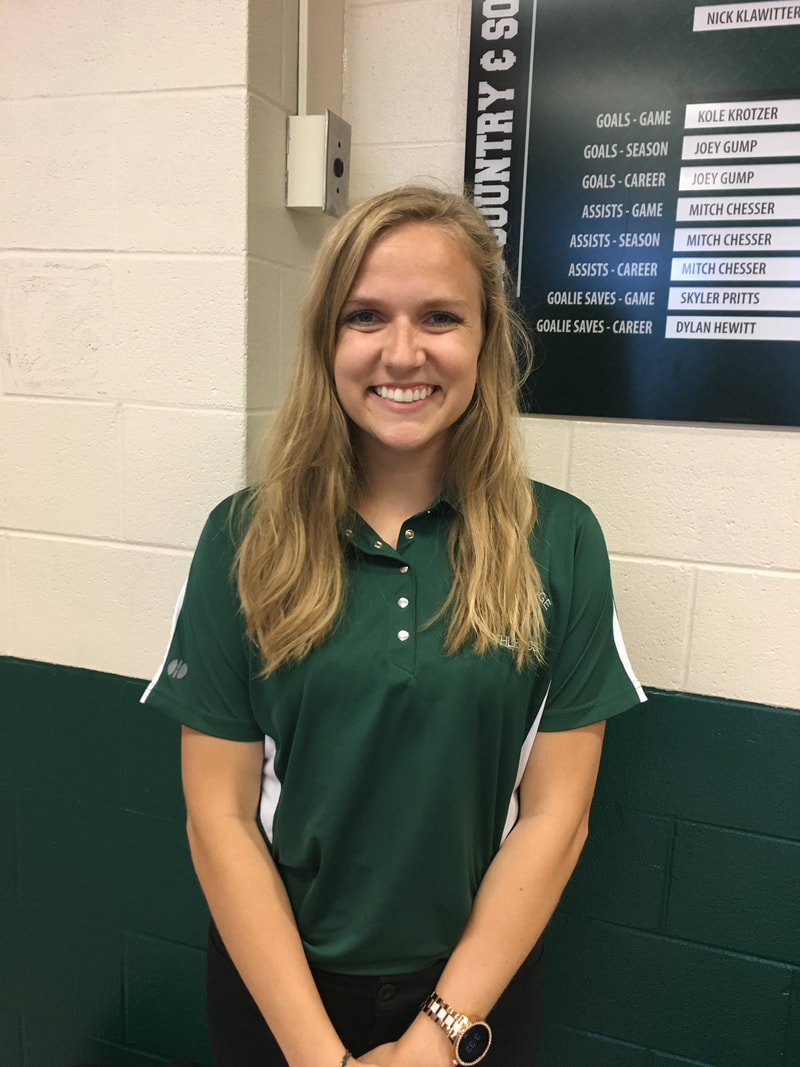 Ms. Rinehart cheesing for a picture by record boards (photo courtesy of Mackenzie Holder)
Powered by