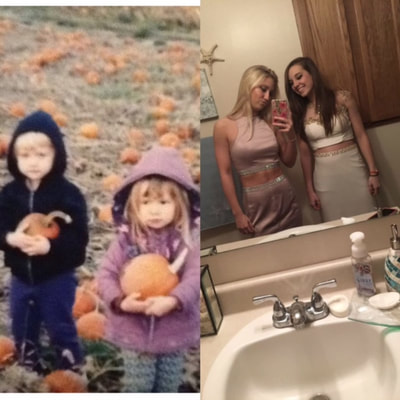 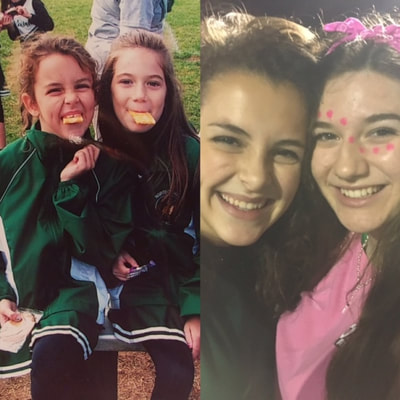 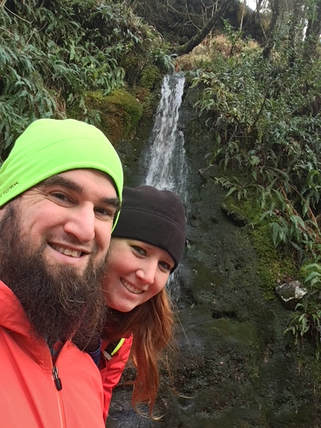 Athletic Trainer Hannah Baker and her husband Bryan enjoying a hike on their honeymoon in Ireland. Courtesy photo.
Athletic Trainer gets married, Renaissance style
By: Madison Legg
With lantern centerpieces, a guest book you had to sign with Quill in Ink, banners with Hobbit doors and hammers, and the entire bridal shower dressing up like characters from Lord of the Rings, our Athletic Trainer, Hannah, recently got married to Bryan Baker.

Hannah said she met her husband on a normal afternoon three years ago at Panera Bread; he he worked there, and she had a book that he liked. She asked him to go on a skiing date with her, but he had to work, so instead he asked her to go rock climbing, and this is how their epic love story began. As of this January, the pair shares the same last name.

“We wanted to have fun at our wedding,” she explains of some unusual decisions regarding the ceremony and reception.

Ever since Baker was in high school, she said she wanted to wear Eowyn's dress from Lord Of The Rings because she loved that dress in the movie. When she told her fiance she wanted to wear that, he said that it would just be simpler if there was a theme, so that’s what they did.

They held their wedding at Cheers and Lakeside Chalet in Lancaster, Ohio. They had decorations that included lanterns they got from Comic-Con, Gryffindor and Slytherin banners, a green banner with hobbit door, and a banner with a hammer on it. She said that the theme just came along after she wanted the dress. So, the dress was the the first of many dominoes to fall into place in the wedding of her dreams.

She went on to say her favorite gift was a homemade jewelry box that her sister made for her, which also held the wedding rings during the ceremony. Baker says when they went to pull the rings out of the moss that filled the jewelry box during the ceremony, the rings got lost and everyone started laughing. She said it took them a few minutes to find them, “but overall it was pretty funny.”

The Bakers opted to honeymoon in Dublin, Ireland. When asked why she decided to go there she said”we narrowed it down to a few places we wanted to visit, such as Tokyo, Japan, New Zealand, and Ireland, but ultimately we ruled out Tokyo and Japan because we didn’t want to have to have an interpreter with us throughout our entire honeymoon.”

Baker says “we chose to do our wedding different because I wanted the dress from the movie and my husband said it would look better if our entire bridal party matched.”


-Madison Legg (‘19) is a staff publicity editor and a entertainment editor for The Viking Vault. 19slegg@northridgevikings.org 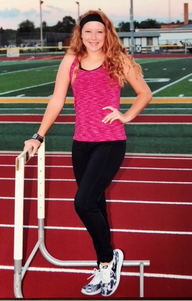 Allen made this entire outfit as a 4H project, including the headband. Photo credit Olivia Humes
Rachel Allen: food and fashion board fame
By: Olivia Humes
NORTHRIDGE - Rachel Allen ('19) is a participant in the Food and Fashion Board for her 4H Club. She started on the Licking County Fashion Board in 2015 and has been on it since. Allen is also currently a 2018 state fashion board member.

Being a member of these boards consists of preforming community service activities, and both boards plan the fashion judging and styling shows (Licking County plans the county show, while State Board plans the state show).

Throughout her participation on these boards, Allen has been very successful with her projects. She states, “At the county level I have recieved the modeling award three times, the construction award once, first place at the clothing skilathon, the best of show in 2015 and 2017, along with many others.”

With help from her grandmother, Allen has crafted outfits starting at the beginner level with "Sew Fun" and "Sundresses and Jumpers." She then moved on to more intermediate competition with "Clothing for middle school" and "Active Sportswear." However, now Allen participates in advanced projects, consisting of "Clothing for High School" and "Creative Costumes."

Allen explains that her participation in being a member of these fashion boards has had many positive effects on her life. When asked if this has influenced her career choices, she states, “Yes, I have been looking at and investigating the fashion design programs at Kent State University and the University of Cincinnati.”

Allen also explains that her life has been positively impacted by this organization. When asked if it has taught her anything, Allen says, “By participating in this club I have learned many traits that will definitely help me later on in life. I have been taught to be patient, determined, and confident, which are helping me throughout my schooling and the rest of my life.”

Allen plans to continue to be a member on the county and state fashion boards until she is too old to participate. Members must be between the ages of 14-18 by January first. Allen states, “I’ve really enjoyed doing this, and I’m happy I’ve found something that will help me for the rest of my life.”


- Olivia Humes is a second-year staff member and Web Editor of the Viking Vault.
Powered by