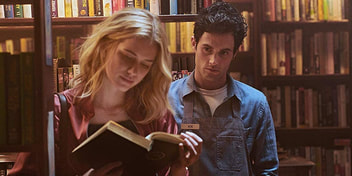 Picture by Gianluca Russ of Joe and Beck at Joe's workplace, the library.
You should watch You
By: Macy Hart
NORTHRIDGE - Have you seen all of the memes or fangirls post about Joe Goldberg? Well, that is about the show You. You is a great show if you like to watch dramas, crimes, and thrillers. You is about a man named Joe Goldberg who stalks women and falls in love with them. Joe has a rocky past with a girl named Candace that no one knows about.

Season one has great rising action and a lot of cliff hangers. Once you watch one episode, you would have to watch the next one. The basics of what you need to know look like this:


Joe, the main character, ends up meeting a girl named Guinevere Beck at the bookstore where Joe works. Joe then starts to obsess over Beck. Joe watches her through her window, taking pictures of her and even going into her house, taking things to keep.

Joe ends up getting the chance to take Beck on a date. They end up getting along and dating. Joe seems like the perfect man for Beck because he is always trying to help out and listens to her. Beck is used to people who only thought of themselves instead of others. Beck’s friend Peach, for example, was the one person who only cared about herself.

After a while, Beck starts getting frustrated and wants to do things by herself without any help. Joe gets upset because he always wants to be around Beck. Beck ends up finding out Joe stalked her before they started dating because he hid a box of her stuff in the ceiling.

Beck tries to get away from Joe, but Joe manages to get her in the glass box. While Beck is in the box, Joe is getting coffee with her friends to try to make everything seem normal. He has her in there for a couple of days until she gets out by acting like she forgives Joe. Beck runs up the stairs to open the door, but the door is locked … Joe ends up … well, I guess you have to watch the rest to find out what happens.

Many girl fans find Joe attractive because of his looks and because he was only into Beck, but would you want to date someone that once was your stalker? Those are the questions you ask yourself as you watch this season.

- Macy Hart (‘22) is a staff writer for The Viking Vault.
Back to Top
Powered by