THE VIKING VAULT
Carpenter’s journey to states about to begin again
By: Sydney Miller
NORTHRIDGE - If you keep up on the Northridge track team, you know Olivia Carpenter. And you probably know all about Carpenter’s accomplishments. Carpenter has run track for four years and “every time my coach says it’s going to be hard to drop more time, I always end up dropping my time” Carpenter says.

After Carpenter’s big accomplishment of making it to states and breaking the school record, with a time of 14.9 seconds, and sadly came in last place, Carpenter’s return to school was flooded with people congratulating her, people who told her they never thought she could make it that far.

This year Carpenter has felt the pressure of making it to states again. She even says, “If I don’t make it to states, then I might beat myself up. My goal is to make it again and win.”

With this urge she has been training for six weeks with her training partner Sydney Menix, during their off season. With the off season training she hopes to begin the new season where she left off. One of Carpenter’s pleasures of going to the weight room is seeing that she can lift more than some of the boys basketball team members, which makes her feel more powerful. With the help from the weight room she “will drop time because of the muscle that she’s building in her legs, that will help her push harder” says Carpenter.

Even Carpenter’s trainer, Jeff Bright, says that her training “will increase her bone density for later in life” so she won’t be as prone to injuries and have a safe and injury free season. Bright also says, “it’s important for her to train in the off season because her strength and power come most important during her off season. Then during her season she can focus more on technique. This is also the time of year to increase her muscular size, endurance, and power as she gets into her season.” Her trainer likes having Carpenter in the weight room because,” she’s strong, pushes herself, is dedicated and is motivated … just to name a few.”

As the summer break came to an end, Olivia also found that she was invited to compete in Australia for a national competition. Since Olivia was invited, she has taken track even more seriously than before. With the support of her father, he has told her if she “wanted to be better; she will have to gain ten pounds of muscle.” Since finding out about Australia and wanting to return to states, her workouts have consisted of: an eight hundred meter run, dynamic stretches, block work, hurdle form, work on her steps between hurdles, and finally, how fast she can do it.

“What I like most about track is winning. It feels good to go home with a few medals,” she says. “Besides that, the track team is just one big family.” 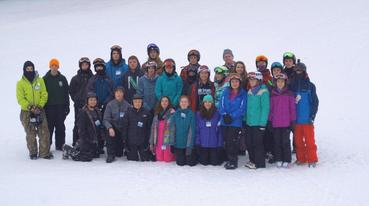 The Ski Club during a practice. Photo courtesy of Drew Pavao.
Ski Club: the highlight of Viking winter
By: Chase Stermer

MANSFIELD - As Ski Club draws closer to an end, so does the harsh but perfect winter weather. The weather here Ohio has been especially weird this year but, luckily, good enough to ski in. Last winter, by contrast, it was not as cold as other winters and Ohio  got little snowfall, which melted very fast. This year has been very strange with days with three inches of snow one weekend, followed by 65 degrees and sunny the next weekend.

Most of this year’s Ski Club members have had a blast this season, except an unlucky few who injured themselves on the slopes.  Jake Stocks (‘19) broke his collarbone while attempting to stop on his snowboard; instead of stopping, he tumbled down the hill, breaking his collarbone. Dreya Stone (‘19) also broke her wrist on icy patch in the snow.

Even with the risk of injury, Ski Club is a great experience and an amazing pastime, members say, because you get to hangout with friends and get to meet so many amazing new people. Christopher Woods (‘20) says, “ I do Ski Club to hang out with friends and to improve in snowboarding.” Another reason to do Ski Club, Woods says, is for the nature aspect of being up on a mountain with your friends.

Snow Trails in Mansfield, where the club goes on Sundays, provides members with the needed equipment to ski, and inexperienced skiers can even take lessons there. Snow Trails features a full restaurant that serves a variety of foods and drinks. They also have a cafeteria that you can get food and drinks from, and Northridge’s Ski Club does bring food for the group that people in the group have made.

-Chase Stermer (‘19) is a first-year Vault staff member and Entertainment Editor. 19cstermer@northridgevikings.org
Bowling Team on a roll
By: Katie Applequist
​
NORTHRIDGE- Step...Push...Swing...Bowl. One-one-thousand. Two-one-thousand. Three-One-Thousand. CRASH. Pins clatter to the ground as cheers and applause fill the room. Now you can breathe again.
​
The Northridge Bowling team has wrapped up its second year, and like the first, it was “fun and successful,” according to coach Mike Pankuch.

Each match includes two games, and five people bowl per game. After two full games, two “Baker” games are played. A “Baker” game is when five bowlers bowl only two frames in a game. The first bowler would bowl frames one and six, the second would bowl two and seven, the third three and eight and so on. The total number of pins that are knocked down each game is then added together and whoever has the most wins.

The highest pin total the team has ever gotten in a single game is 682. “The team is really working hard and every match they work to knock down more pins,” says Mike Pankuch. “It’s really rewarding to see them achieve their goals.”

The season runs from November to February with matches starting in early December. The team bowls as a varsity boys team, but that doesn’t deter the girls on the team. “You just focus on yourself. Do your thing and bowl your game. Don’t worry about what the person next to you is doing. That’s a big thing for me,” says McKenzie Pankuch (‘18).

Just because there are more boys than girls doesn’t make matches less fun.“The atmosphere at matches and in practice are both cheerful and friendly. It’s really welcoming and relaxed. All the teams support each other and there are high fives all around,” says Alayna Curran (‘19). “I joined because I thought it would be fun … and it is,” she adds with a smile.

“There’s lots of camaraderie between the teams. If someone on the other team is having a really good game everybody is rooting for them,” says Jacob Feightner (‘18). “It gets really loud at matches.”

“Seeing other teams get strikes and spares consistently makes me want to get better. It’s really cool to see because nobody rolls the ball the same way but everybody can get the same results,” says Chris Curran (‘20).

- Katie Applequist (‘18) is a first-year member of the Vault. 18kapplequist@northridgevikings.org 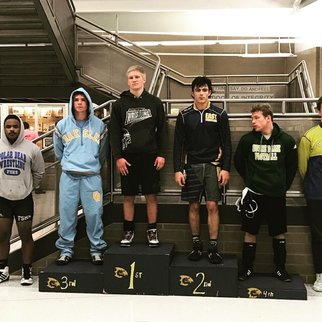 Strout (‘17) on the podium after winning his 100th wrestling match, at Maumee Bay, ranking #1 in his weight class. Photo courtesy of Steele Strout.
NHS to host LCL Wrestling finals
By: Austin White
NORTHRIDGE - Crowd support means a lot in an intense, individual sport like Wrestling. Viking wrestlers are hoping that support makes a difference for them on Feb. 18, the day that Northridge will host the Licking County League competition.

Of the seven meets/tournaments the team competes in during regular season, the ones always on their victory radar include those at Olentangy, Maumee Bay, Sectionals, and the LCL meet. Hosting those LCLs at home is a big deal, according to wrestlers.

“This gives our school community the chance to come out and support us, people who might not normally come out to a wrestling meet,” says Evan Willeke (‘18). “Usually our meets are hours away.”

Though some of the biggest meets of the season are still ahead, Willeke said NHS is unique in that the school has three or four state contenders: Strout, Belli, Reeves, and Corbin. Wrestlers compete in Sectionals hoping to qualify for Districts and then for States.

Though many have wondered out loud why so many coaches resigned in such a short period of time, Athletic Director Justin Greiger said the resignations had nothing to do with each other. Head Football Coach Shawn Finkle decided to resign because the school was just way too far away from his house, Head Volleyball Coach Robin Elliott chose to resign because she is the middle school athletic director and it was hard to have both responsibilities, and Head Cheerleading Coach Amanda Chapman chose to resign due to personal reasons.

Greiger has already filled the head football coach spot with Jay Campbell. Campbell is a special education teacher hoping to eventually come to Northridge to teach. Greiger officially offered Campbell the coaching position, but his employment still has to be approved by the Board of Education. Greiger said that the reason he hired Campbell was because he was impressed with his experience, and he also said, “He is committed to be here,” and Grieger liked that about him.

On January 17, Campbell was introduced to the boys. Alex Chalfant (18’) said, “ I like that he has lots of energy, and he knows what he is talking about.¨ He also said he anticipates a smooth transition and season. Drew Davidson (18’) says, “It’s hard to be going into senior year and playing for three different coaches during high school,” but the football team is positive about their new coach.

As for the world of high school cheerleading, Chapman resigned toward the beginning of the basketball season. Greiger stated that the head coach next year is still being decided, but until then, Melissa Bailey has decided to step up and finish coaching the team for the remainder of the 2017 basketball season.

As Alison Bash (‘18) looks toward her senior year of cheerleading, she said she hopes whoever the school hires to take the coaching position is “someone who can enforce the rules, but not be too strict with them,” and she is hoping the team will continue to be able to stunt.

For volleyball, Elliott’s resignation came at the beginning of January, when her AD responsibilities got to be too much to combine with coaching. Greiger said the head varsity coaching position is still open at this time and hopes it will be filled soon.

Greiger said finding people who want to coach at Northridge isn’t hard because we have good kids who are “fun to be around,” and we are a school where “There is room for growth, opportunity and improvement.”