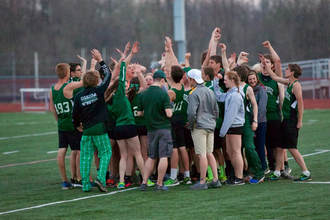 The track team gathered after successful meet Picture courtesy of James Pool
Track and field … on your mark
By: Sydney Miller

NORTHRIDGE- As spring rolls around, you can expect to hear that one person who always complains about the amount of running that happens at track, practice especially the most dreaded workout of all… 400 repeats. Who doesn’t love running as fast as you can around the track wonder why you did this sport in the first place?

Track and field is basically split up into two sports of running and field events. In the running portion of track, all you do is run; as silly as it seems, it truly is all you do. In a practice you can run up to a mile or two if you’re a sprinter, and for a long distance runner, you can run up to three to five miles a practice. Meanwhile, in the field portion of track, workouts vary depending on what your event is. At a typical practice for throwers, you start off with your warm up, and a couple practice throws while your coach will fix your form. For jumpers, practice will start with warm ups and then work on form and jumps as well. For every event athletes have a different warm up, but they have some of the same guidelines.

Of course, track comes with its benefits as well as its disadvantages. “In track, the team grows to be one big family that wants to see everyone succeed,” says Olivia Carpenter (‘18), a fifth year track runner.

Along with getting to know your team, you also are constantly making new friends from different schools. “Not only does everyone become so close, and you get to meet new people, but for a personal benefit it’s a great way to crosstrain for other sports and to get into shape,” says Gabe Miller (‘18), a six year track athlete.

Though these are all great, the best part of track is watching yourself get better and better every week. In track you’re always a winner no matter what; by dropping time, or even by having a good start or finish, you win.

On the other side, just like in the real world, not everyone gets along, especially at practice. Though not everyone gets along you spend what seems like endless Saturdays, and endless hours competing at different meets in the unpredictable weather. “The weather really brings out everyone's true side,” Carpenter states. Some days you’re only at a meet that lasts all day to do one event that might take you 13 seconds.

Track attitude varies from each person to the next. Depending on who you ask about track, you can receive many different answers. If you’re a person who really enjoys running, and are willing to put in the effort, then track can be a good sport for you. If you’re looking for a sport to be a part of a social event, then track might be a good sport for you as well. Otherwise, if you’re someone who doesn’t like running and aren’t a people person … there may be better ways to get into shape. 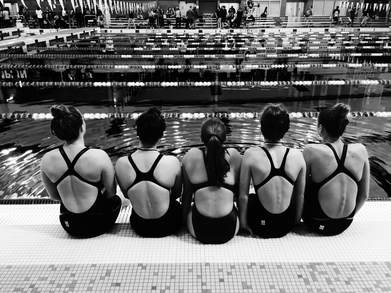 Biggest challenges of swim season
By: Maddi Giffin
​
NORTHRIDGE- NHS has had a swim season for a long time, and a “Long time” also describes the season, which typically lasts about three months. That stretch is hard and grueling for any swimmer. They have faced a series of challenges since winter began, but most would agree it is all worth it in the end. According to Victor Weaver (‘18), who has been part of the team for five years, people view swimming as “recreation” and assume athletes “don't have to do real work.”

A few of the challenges most people don’t appreciate include:

Motivation
We all have gone through times where we have no motivation to go to practice. For swimmers this comes quite frequently just because it is hard to imagine going to practice when it’s so cold outside and putting yourself in the most uncomfortable position so that you can grow as a swimmer. Weaver says that he finds motivation because “he knows by going to practice it will make [him] better, and [he] believes that all swimmers feel this way.” Weaver pushes through the hard times and will come out as a winner.

Exhaustion
We all know the feeling as an athlete where you are physically and mentally exhausted  and feel you can't go any further. Weaver says that when he feels that way, “The people next to [him] in the pool keep [him] going” and he “realizes [he} needs to beat the people next to him for personal accomplishment and to better his team.” Also, when Weaver is in underwater he hears his teammates cheering for him, but “mainly it’s about beating the people next to him.” Before racing, Weaver tries to humanize the competition and reminds himself that they are just people like him and tries not to think of them so much as competitors.

Throwing up
For swimming this can “come up” pretty frequently if you are pushing yourself past your breaking point a lot. Weaver says that he has felt as though he will throw up but says that if you are serious about competitive swimming you will persevere and push through the hard times. In the event a competitor does throw up in the pool, lifeguards clean it up with gloves and bleach while the swimmers either leave the pool or are relocated to another side of the pool.

Water
We all know the burning sensation of chlorine in your eyes. Imagine having water in your eyes and having to open your eyes so you won't run into the wall. Weaver has experienced this before when, at the start of the race, his goggles fell off because of the force created from a dive into the pool. Currently, that race is his PR for that distance, and he says that “When you have no googles you keep swimming straightforward and straight back and keep going.” When you have goggles you have the opportunity to look around, but when you don't have goggles you are just focused on that second and nothing else matters. Victor just keeps pushing for his teammates and to win.

Next time you're in a pool, hopefully you can think about how a swimmer feels and the challenges they face. Weaver says that “even though there are many challenges in swimming,” he truly believes his teammates enjoy swimming.

-Maddi Giffin (‘18) is a staff writer for The Viking Vault. 18mgiffin@northridgevikings.org 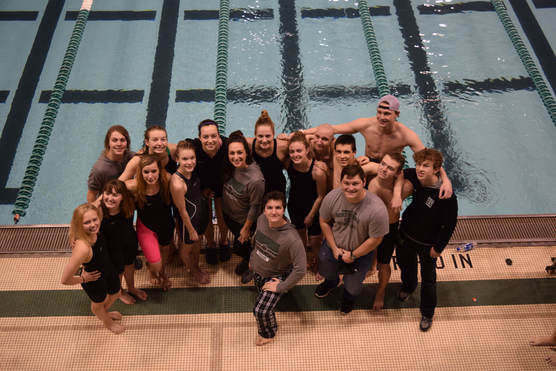 The team that represented Northridge at the District Meet. Not pictured: Maddi Giffin. Photo provided by Katelyn Darby.
Swim season comes to a close
By: Caylee Lindsay
​
NORTHRIDGE- The swim team has certainly made a splash this year with a season of tremendous growth, both in terms of size and talent. With school records, District Meet qualifiers, and Northridge representation at the State Meet for the first time in school history, the 2017-2018 season set the standard for years to come.

For all of the swimmers on the team, the focus was on setting goals and working hard to meet them. Alex Rahde (‘18) was a living testament to the team’s work ethic; “My goal for this season was to qualify individually for the District Meet. By going all out at practice and putting in a lot of hours lifting and exercising outside of practice, I finally did it,” says Rahde.

The head coach for the swim team is Rachel Furr, and the assistant coach is Paul Haught. Together, they push the team to their highest potential and are the heart of the Vikings’ success, according to swimmers. Seniors especially reflect upon their many years with Coach Furr, like Gabe Miller (‘18), who says, “What made all the hard work worth it was being able to see the smile on the parents’ faces and the pride in our coaches’ eyes. It really warmed my heart seeing how happy they were for us and how they were able to see the progress from little middle schoolers who didn't know they could accomplish so much by their senior year.”

Overall, the Northridge swim team experienced a tremendous amount of growth and success this season. Underclassmen note that the seniors leaving the team have certainly left their mark, paving the road for next year’s team to exceed expectations once again. 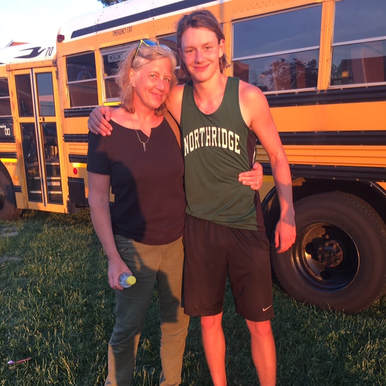 Senior Gabe Miller poses for picture with his Mom Photo courtesy of: Coach Featheringill
Class of 2018 continuing athletic careers in college
By: Cole Fox
​
This year Northridge High school has many athletes that have worked very hard throughout their high school years that are now being rewarded by getting the opportunity to play sports in college. Senior year has brought on a lot of stress trying to make a decision on picking a school for many soon-to-be graduates, but these athletes also have the stress of making sure that they are ready and completely prepared for when the time comes for them to begin their college sports careers.

Another senior that has been working very hard throughout his senior year is Roman Kiser (‘18). He has verbally committed to Marietta for football but is looking around for other options, as well. Kiser says he wants to know all of his options before he makes a decision that affects the rest of his life.

Both seniors are getting ready for their first year of college but are preparing in different ways. Kiser stated that he is preparing himself by “Practicing every day and participating in track” to keep himself in shape. On the other hand, Miller stated he is “doing a lot of weight training and having a heavier emphasis on training.” Both students are very excited for their first year of college.

Asking Miller about who influenced him over the course of his years at Northridge he stated that “Mr. King influenced me a lot because he instilled confidence in me in both the classroom and during athletics.” Miller also added that his mom helped coach him and pushed him to believe that he could do it.

Miller and Kiser are both involved in track and are excited about enjoying one last season as Northridge athletes. They are excited to push themselves to be the best they can be this season and are excited about the new journey that they are about to start. When asked what he is most excited about for his college season Miller replied by saying, “I am pumped to begin building up my endurance and building more muscle.” Then when asked the same question Kiser replied, “I am hoping to further and excel at my position, as a kicker. Hopefully someday I will continue my goal of going on to the NFL.”

Working hard will not be unusual for both of these boys they are used to pushing themselves because that is what they did every day during football season. Their fellow athletes say they are very proud of the two and are very excited to see what they both will go on to do in the future.

Both students say they have great memories to take away with them from Northridge that they will keep with them for the rest of their lives, and they are excited to begin making new ones next year.

Other students not available for question but are furthering their careers in sports and college are:
Senior (‘18) Brandon Blankenship will be attending Charleston University for baseball
Senior (‘18) Lexi Hart will be attending Rio Grande for softball
​
-Cole Fox (‘20) is a first-year staff member and the Sports Editor.
Powered by