The NMB’s 2019 show, “The Raven,” has been in the works since July. Band Director, Cassandra McCall and her team have expressed their hard work through all sorts of obstacles.

“We’ve practiced in really hot weather, like at band camp, but we’ve also practiced in really cold weather,” explained percussionist Aidan Dunlap (25’), first-year member of the marching band. “The worst was definitely when there were ladybugs swarming us.”

Any of the members of the band will probably tell you they were nervous about the performance. The anticipation alone made the bus rides to Dayton tense, but hearing that they were dealt some tough judges made the event all the more terrifying. “I hoped we would get a one, but I wasn’t so sure we could pull it off,” said bass drummer Chris Curran (‘20).

Despite her calm and collected exterior, Ms. McCall also had her worries. “I knew the kids had it in them, but I also knew it would be hard since we were down two members,” she explained. “As we walked into the stadium, I heard that nearly every other band had earned a two. That was intimidating to hear.”

Northridge was the first band of their class to have their score announced. The crowd was nearly silent as the announcer prepared to read the band’s rating. “Northridge Marching Band, your overall score is… one: superior!” The band members and Northridge families flew from their seats with excitement and cheered right up until the next score was being announced.

“I was very, very surprised,” smiled color guard member Ellie Burton (24). “I was so excited, I never expected this in a million years.”

“We were absolutely ecstatic,” McCall explained, with a smile. “When we heard the news, we knew our hard work had paid off.”

After the competition, the band gathered by the buses to meet with their families and take pictures together. Traditionally, each class takes a photo together to remember the experience.

On the way home, the band all stopped at Wendy’s to celebrate their big win. This served as a great bonding experience for the band and staff alike, filled with chicken nuggets and Frosties. “We all reflected on the season and yeah, it was a great bonding experience,” recounted Burton. “We got to talk about how we worked together as a team and pulled a one. It was great.”

With the season technically over, many members of the band are at a loss for things to do. “I don’t know what to do with myself, now,” laughed Dunlap. “Every day, after school, I just come straight home. It’s weird, I used to wish I had more time, but now I’m missing band. I just can’t wait for next year.”

Charlotte Dunlap (‘21) is a staff member of The Viking Vault.
@21cdunlap@northridgevikings.org 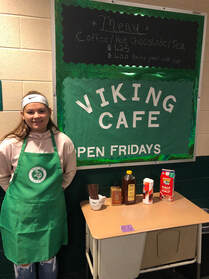 Aspen Conley(‘23) working at the Viking Cafe
Students are spreading “smiles, cheer and love”
The Viking Cafe officially opens
By: Lyndsey Stocks
NORTHRIDGE - Even as the first nine weeks of school has ended, changes are continually being made in the high school. The newest is the Viking Cafe, run by Ms. Mincks, Ms. Anita, and their students. The cafe is open on Fridays for just over twenty minutes before school starts.

Ms. Mincks is full of enthusiasm for this new idea and how it will affect both her students and the rest of the school. “I am excited to observe our paying customers enjoy their warm beverages (and our individualized memed coffee sleeves) and know that our class put those smiles on our students’ faces and room 111 students feeling the GRIT of running a successful and influential cafe,” she says.

She also sees this as a fun teaching lesson for her students. She explains, “We have been preparing for weeks. We have enjoyed putting cute coffee memes on the sleeves. Each student has a different ‘job’ and have practiced each job effectively. We will continuously work on how to provide a service, how to order supplies, taking inventory, prep work, closing work, job titles and descriptions, ordering inventory, even counting our bank and developing deposit slips.”

Aspen Conley (‘23) is one of the workers of the Viking Cafe. She agrees with this being a teaching lesson saying, “It’s a good thing for us students to learn how to do this stuff so when we have a job we already know how to do most of it.” The students working the Viking Cafe have been preparing to share this with the rest of their classmates at school. “It will make people want to come to school more often,” Conley continues.

As previously mentioned, the Viking Cafe is one of many changes that have happened in the high school to improve the school and get students involved. Lauren Aamodt (‘21) is part of the student council, an organization leading many of the changes throughout the school that members hope will keep catching on in other groups, like Mrs. Mincks’ classroom. Aamodt says, “I think the positive changes are really helping throughout the school, because it makes the idea of coming to school a little less miserable and helps create a more positive environment.”

The Viking Cafe is open before school for students and staff. Along with beverages, though, Mincks’ classroom also has a school store. “Our one of a kind cafe is selling home-made hot chocolate, Starbucks coffee and two different teas. We have all the fixins, too, such as mini marshmallows, creamer, sugar, honey and my favorite, cinnamon. In addition to the Viking Cafe, our classroom has received a wonderful donation of various school supplies that we sell at 90% off. The school supplies include anything from pencil erasers to binders. We've got it going on,” she states.

Lastly, Mincks adds, “Our Cafe is much more than a way to earn extra funds for our class. We want to organically enrich our community and welcome people into our classroom to see what we do everyday.”

- Lyndsey Stocks (‘21) is the assistant web editor for The Viking Vault21lstocks@northridgevikings.org

Pictured here is part of the Principal’s store that was open on Monday during all lunches.
Vikings plan for PBIS
By: Anna Kohler
NORTHRIDGE - PBIS stands for Positive Behavior Interventions and Supports. Schools in Ohio legally have to have a plan that involves PBIS. Northridge is participating by using a plan that will hopefully decrease bad behavior and recognize good behavior.

This program encourages good behavior and rewards students for doing good things rather than punishing for bad things. All teachers are required to participate; they can go in either on their computer or app on their phone to their class and reward the whole class or a certain student. The reward is points, which add up over time, and then students can use them later in a teacher’s or principal’s store.

Principal Mrs. Bernowski requires all teachers to at least, “Do first period on time attendance. They are strongly encouraged to do more and to have a store, but it is not required.”

In order to earn points for things other than being on time, there is a Viking Values list. There are seven Viking Values that include: trust, leadership, communication, collaboration, accountability, integrity, and respect. Each teacher has the ability to reward any student they think have or has shown these qualities.

Teacher Mrs. Garee says, “I give points to students who go above and beyond on peer feedback and also who work especially hard on ACT practice things that aren’t necessarily required or graded.”

In the stores there are a wide variety of rewards students can purchase. A few things in Mrs. Bernowski’s store include: scrunchies for 20 points, parking in her spot for 75 points, Croc charms for 10 points, earbuds for 30 points, and a free tardy for 40 points. Her store is open every other Monday starting 11/11 during lunches only.

Mrs. Bernowski has used this strategy and idea in previous districts, but the idea for it at this school came in two different ways around the same time. The PBIS Committee and staff members Mrs. Donley and Mrs. Mincks suggested the idea, and then Mr. Decker’s students entered the mobile app contest put on by Congress. They ended up creating an app similar to the one used by the Principal previously, but they weren’t aware it existed. It was then decided to go with the points and store strategy because it has been successful in other schools: “We got this version because I used it before at another district and know it works well,” said Mrs. Bernowski.

Students at Northridge have been excited about this new plan, and the Principal has received many comments requesting things in her store and also just giving thanks. The Principal's Advisory Board is currently helping with ideas and brainstorming events to help better this plan!
- Anna Kohler (‘20) is assistant entertainment creator for the Viking Vault. 20akohler@northridgevikings.org
Future of student parking lot
By: Sarah Phillips
NORTHRIDGE - With the elementary groundbreaking ceremony last Saturday, Northridge is about to experience more and more construction. Most students have begun seeing the demolition take place at the beginning of this month with the chopping down of trees in the band field near the student parking lot. However, most students are still unsure where they will be parking as the construction continues.

According to Assistant Principal Mr. Mike George, district leaders are going to try to keep parking running as “smoothly as possible.” Many students are worried about this transition with winter coming. Jared Yorde (‘21) says, “I don’t want to walk far to get to my car. I’m an upperclassman, and my car is supposed to be closer this year!”

However, even though the original plan was to move the parking lot in October-November, the new plan is that the student parking lot won’t officially change until March. Though plans are constantly in flux, the current approach includes a new, temporary parking lot for students that will be built in between the intermediate playground and middle school softball field. According to Shelby Yorde’s (‘20) Formal Report for college Technical Writing, “The playground has been fenced in to create less of a chance for any harm to come of children at recess” as the temporary lot goes in.

There are mixed reviews from students on these plans. Some are just happy it won’t be happening this winter, like Alexis Adams (‘20), who says, “Now during winter I won’t freeze walking so far getting to and from my car.”

Another student, Lauren Aamodt (‘21) says, “I’m so glad they are postponing the move of the student parking lot because especially during basketball season on the days I’m carrying my basketball bag and backpack while dressed up in freezing weather I want to be as close to my car as possible.”

Others, like Jared Yorde maintain, “The intermediate school is still really far away!”

Mr. George is excited about this new change for the Northridge schools that is long overdue and, even though it will be uncomfortable and both students and staff will have to be flexibly, it will be “well worth it in time.”