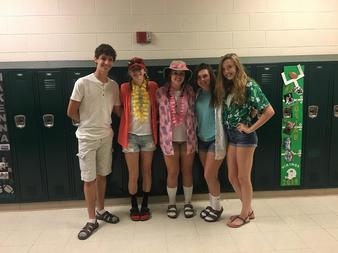 Many of the candidates were not actually planning on running until fellow classmates in student leadership spread the word that more people were going to have to run in order to fill all five positions on student council, so others willingly volunteered.

Payne states humorously, “A teacher came to me and told me that I was going to run for either historian or secretary and that I didn’t really have a choice, but she also guaranteed me a spot on student council since no one else would be running against me.”

Only two people were actually competing for a specific position on student council. Curran and Zion Carpenter both ran for president. Curran was actually not originally planning on running for president or for an officer position at all. Curran states, “Um, well the whole reason I ran in the first place was actually because of a mistake. A teacher called me down to her room because she thought that I was one of the people interested in running for president, which was not the case at the time, but after she called me down, I just decided, why not?”

Curran says that he was not expecting to win president. “I was surprised when I won, because Zion had been class president for the past three years of eighth, freshman, and sophomore year, so I figured that he would have been the more popular vote.” Curran made sure to prepare and have achievable goals in mind when giving his speech to the junior class. “I prepared by writing my speech in advance and practicing it over the weekend with my sisters. I plan to increase communication from student council to the rest of the student population so everyone will know about the school functions, fundraisers, or other activities going on,” Curran states.

Wasem plans to help and team up with Payne in communicating well. “I would like to get the junior class more involved in events like fundraisers, sports events, or N-Unit themes through the usage of social media and putting different things online,” she said.

The main goal of everyone elected for the five junior student council positions is to be more proactive, have a better communication through social media with the rest of the class, and spread the word about school events to get more students involved.
-Ali Zigo (‘20) is the Junior Print Editor for The Viking Vault 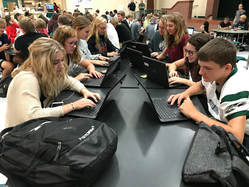 Students working hard on their chrome books instead of their cell phones. Photo courtesy of Shelby Yorde.
Talkin’ about (but not on) cell phones
By: Shelby Yorde
NORTHRIDGE- Cell phones … by far the biggest change in the new school year and not just for the Vikings. This summer, all principals in Licking County had a big meeting discussing the challenges caused by cell phones. They came to the conclusion that they HAVE to go.

High School Principal Ms. Anderson says some schools in the county have banned phones all together. She, however, felt that that was not necessary and that they only needed to be banned from classes and instructional time.

The reasoning behind the whole thing was because kids were on their phone when they shouldn’t have been. “It’s a responsibility thing,” Anderson says. “It is also rude to the teachers. They are trying to make you succeed in school.” She also says controlling cell phone use is a life skill. You need to be able to refuse something you know you shouldn’t be doing, she points out. “We were all too attached to them.”

Recent alumni report mixed policies on cell phone use beyond high school and acknowledge it’s all about knowing where and when it’s appropriate. While some professors reportedly deduct points at the mere sight of a phone, others rely on students to self-regulate. Alumnus Shelley Payne (‘91) is now a college professor at Otterbein University. She says that she allows phones in her class because, while students looking at their phones does bother her, it is “their loss.” By being on their phones, they are missing out on valuable information they need to know.

“Phone use during class is disrespectful to the professor, and students around you may be distracted,” Payne said. “Professors devote a great deal of time to class participation and not taking advantage of that is unfortunate for the student and their academic preparation.”

Teachers at Northridge High School were given the choice to report back to administration how they would regulate phones in their room, and policies vary from collecting them in one location to allowing them to be used in the final five minutes of class, provided instruction is over.

As for current students living under these policies, Erica Siegel (‘19) says that it benefits students in some ways but provides challenges in others. “I need it in classes like art when finding a photo to paint,” Siegel notes. “It is easier to just look it up on my phone rather than taking up space on my computer.”

Zach George (‘19) also says he wishes he could have it in class because “Sometimes I just need a five minute break as a release.”

Students like Braden Yost (‘20) says he is okay with the new rules. “I might actually get my work done now,” he says. In fact, there are multiple students who says it doesn’t really affect them because they never used their phone in class anyway.

Mr. Kirtland, the art teacher, says that he has had a hard time getting his students to understand that phones aren’t allowed. He says his students in the past used their phones a lot for artwork. He also says that he thinks there is some good that could come out of technology. “I do, though, completely understand where they’re coming from with this,” Kirtland said. “There are a lot of
bad uses for technology, as well.”

All in all, administrators and teachers generally say they are impressed with the way the new cell phone policy has been received.

“I know there are mixed feelings for the students about this, but I’ve been so impressed with the way they’ve gotten on board. Even when they’re warned to put a phone away, there’s respect and cooperation. I thought it was going to be a daily battle, but I think students here mostly want to be respectful,” said Mrs. Hotchkiss, the freshmen English teacherand Yearbook advisor.

- Shelby Yorde ‘20 is the Assistant Print Editor for The Viking Vault. 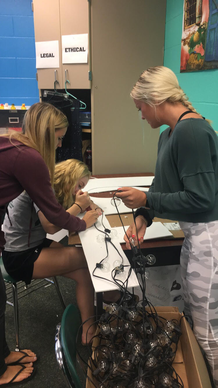 Seniors Hunter Henson (19'), Audrey Holt (19'), and Gabby Webb (19') working on the light up letters that spell out "FUN." Photo by: Mackenzie Holder
Homecoming behind the scenes
A first-hand Leadership perspective
By:Mackenzie Holder

Student Leadership worked very hard at work over the past few weeks getting everything ready to make this year a great Homecoming for everyone, coming up with new and creative ideas to try and get everyone excited.

The class worked on things like coming up with the playlists for the dance to making all of the decorations. Our theme this year was a Night on the Boardwalk, and we were very excited to see how it was going to turn out. We were hoping to make it like an old boardwalk with a bunch of lights and a red background. Most people don't know what an old boardwalk looks like, so we tried to bring that magic to the front hallway.

Even when we were first beginning to figure out the theme and trying to come up with decorations, we knew that we wanted letters that lit up. Once we began researching, we found that they were way to expensive for our budget, so we decided to make our own. The letters that we found were almost 300 dollars for one letter, and we were not going to pay that. Instead, we used lights we had and cut out and painted the letters “FUN.”

This year we tried to be cost effective and make as many of the decorations on our own as we could. Everyone pitched in and helped us make it a night to remember.

Everyday outside of the lunchroom during Homecoming week, Leadership ran an activity to try and grow school spirit and get more student involvement. Gabby Webb (19’) said “One of our goals this year was to get more students involved. We wanted everyone from freshman to seniors to be having fun.” One day we had a fortune teller and another day we had a basketball game. This really helped get the underclassmen involved, and we hoped it helped them get excited for Homecoming.

Some of the other things that we worked on is that we had hula hoops hanging from the ceiling and draping lights from them. We hoped that this looked very pretty and they looked like they are floating in air.

We are hoping that everyone had a great time and enjoyed all of the decorations. Everyone looked so nice, and it was great seeing everyone dressed up.
-Mackenzie holder is a print editor for the viking vault. 19mholder@northridgevikings.org

​How it all turned out
By: Shelby Yorde
​NORTHRIDGE- Homecoming 2018, a Night on the Boardwalk, was declared a success by those who attended. In all, 251 students attended including 57 freshmen, 54 sophomores, 58 juniors, and 82 seniors.

The music was a mixture of fun throwbacks and your must-haves such as the “Cha Cha Slide” and “Cotton Eye Joe.”

“The decorations were so cute! I especially loved the light up letters,” said Kathryn Nicks (‘21). 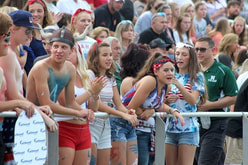 Superintendent Scott Schmidt photobombs the Student Section at a home football game! Photo Courtesy of Brian Potts.
N-UNIT: bigger and better
By: Olivia Humes
NORTHRIDGE- The N-Unit is the student section for all sports here at the Ridge. This year, the Class of 2019 is attempting to take the spirit and competitiveness of the student body to a whole new level.

One of the main objectives for the leaders of the section this year is to increase the number of students that attend the games and participate in the themes. Senior Kody Everts (‘19) says, “In the past years our student section hasn’t been as large as it could have been, and this year we really want to increase the attendance to show some school spirit.” Also, when asked if he could describe the N-Unit, Everts replied, “It’s lit.”

With the help of new English teacher, Mr. Reid, the leaders of the student section are creating a better atmosphere in the N-Unit. Senior Makenna Hale (‘19) states, “the Seniors are working really hard to add some new cheers and props, attempting to guarentee that every grade is having fun, and making this year one of the most memorable yet.”

When asked if she had any advice for students who want to particpate in the student section, Senior Caily Thorpe (‘19) states, “Always participate in the theme, because you don’t wanna be the one person who stands out for not looking like the others. Also, remember that Seniors get to stand up at the front and the first row of bleachers.”

Sydney Koker (‘21) states that, “this year’s student section has been so much better! More students have been participating in the themes and even travelling to the away games to support our team.”

Sophomore Lauren Aamodt (‘21) explains the atmosphere of the student section: “everyone’s so loud and positive, and it’s really fun when everyone actually participates in the theme and does all the cheers.”

Freshman Claire Shank (‘22) states, “I thought at first it might be awkward being a freshman in the student section, but it turned out to be really fun and inclusive to all people.”

- Olivia Humes is Web-Editor in-Chief of the Viking Vault.
Powered by