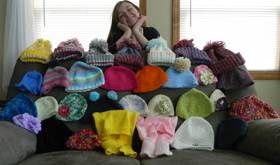 By Mrs. Garee
NORTHRIDGE – She spent her summer teaching
herself to knit so the noggins of young cancer patients at Nationwide Children’s Hospital would be toasty warm this winter. Now, McKenzie Messer (’15) plans to spend her birthday delivering dozens of knit caps and other goodies to the
hospital.
“That’s my birthday gift to myself,” Messer explains with a shrug.
Last October, she got her first knitting instruction books and yarn for her birthday because she thought it “seemed cool.” Once summer vacation rolled around, Messer said the idea to knit caps for young cancer patients came upon her rather suddenly.
“I was just lying in bed, and out of the blue I thought, ‘I could do that,’ and I added it to my bucket list,” she said.
Messer mentioned the plan to her church, Gahanna Freewill Baptist, in July. Before she left that day, she’d received $50 in donations for the project, and by the following week she’d garnered four large Target bags full of toys. “I kind of expected it to die down, but it
didn’t,” she says in wonder.
In fact, a college-age friend of Messer’s has started knitting with her. Together, they have produced and received donations for 36 caps of various colors for infants through teens. “They’ll go straight to the cancer ward because, you know, it’s getting colder now,” she
said. The other donations and toys will accompany the hats.
Messer said her sister, Genny, and her sister’s fiancé, Kyle Mullins (both ’10 grads of NHS), have inspired her. In fact, Kyle was the one who bought her the yarn and instruction books. The couple has also shaped other, if not all, aspects of Messer’s bucket list with
goals such as attending certain concerts, sky diving, and touring Europe by train.
For now, though, there’s a seventeenth birthday to celebrate by giving the gift of hats.

Mrs. Garee is the newspaper adviser who will occasionally come out of journalistic hiding to celebrate the little-known and amazing accomplishments of her students, and Messer is one of her favorite staff writers and editors.
Photo credit: photo courtesy McKenzie Messer

Ms. Devoni Murphy is replacing Mrs. Morvay as the Sophomore English teacher. Murphy graduated from college in May and says she is looking forward to this year. “I plan to challenge the students,” says Murphy. She says that the reason she chose Northridge had to do with her interview. “They’re a great bunch of people. I didn’t feel nervous. I know that if I have questions I can always ask one of the other teachers or administrators for help, and they’ll be there.”

Vocational Agriculture teacher Mr. Kim Weiss moved to the district to be closer to his daughter, Choir teacher Miss Jessica Weiss, after attending some choir concerts and the Grease musical. Weiss has enjoyed working with his students and walking across the Middle School hallway to greet his daughter every morning. “I’d love to get our students involved in community service projects and at least one major leadership activity,” says Weiss. “I plan to bring home a few state banners and/or plaques, and hopefully some individual awards.

Ms. Sarah Keane, who was in the high school second semester of last year as a long-term substitute for Mrs. Miller, has now been hired full-time to replace Mr. Dave Gunn, who moved to Middle School social studies. She now teaches Pre-Algebra and Algebra II Basic. “I have always wanted to be a teacher since I was little. Now that I am a teacher, it just confirms how much I love what I am doing. I love coming to work every day and working with the students. I can't believe we are five weeks into the school year already. Time flies when you are having fun,” says Keane. “I am so excited to have a full-time position at Northridge!”

Mandarin Chinese also has a new teacher, Ms. Tiantian Yang. Yang chose to come to Ohio to teach Chinese in schools, and the college board decided on Northridge. She likes her students, and says there is nothing she does not like. Her goals for this year are to finish Chinese I, II, and III, and to teach about different cultures and festivals in China. “It’s very different than China. I feel very comfortable in the classroom,” says Yang. “The teachers are very friendly and the students are very involved.” 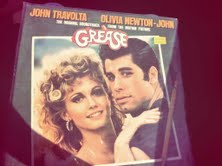 By: Megan Hatfield
NORTHRIDGE- Swappers day is a big deal in Licking County and even surrounding areas ... a place where people can get their years worth of guns, hunting dogs, small nick nacs, and fair food. None of these things ever appealed to me, but Kayla Jasper ('15) and I decided to venture out to this event and see what it was all about.

When Kayla and I arrived at the street fair-like garage sale our first mission was to find food. I thought in my mind that might be one of the highlights of my adventure. I was very wrong. Kayla and I bought overpriced pieces of pizza, and they were not anything worth paying for. After the not-so-amazing lunch we had was over, we continued to walk around. I saw tons of stands with guns, knives, camouflage anything you needed, knock off handbags, sunglasses, and other trinkets you could bargain the sellers for. The fact that anyone can buy the guns there is a little frightening to me.

After we ate, we sat and people watched for a couple minutes. This was somewhat enjoyable. It was a bit humorous to see a couple holding hands with guns over the opposite shoulder, or passing by stands and the sellers asking "What are you looking for today?" What were we looking for? We had no idea, and we learned quickly we were out of place. We weren't wearing camouflage or bright orange or carrying a weapon of some sort.

Our goal after we started to feel that out-of-place feeling was just to get out of there. How far were we from nearest exit, and how much longer until this awkward feeling I had would be over? We decided to walk around a little bit longer. We paid to park and get in, so we needed to try and make it somewhat worth it. We decided to explore and keep our  eyes pealed for anything that we could be moderately interested in.

After walking around not finding anything to catch our eyes, we finally saw a stand that featured things we like: old records in boxes. Kayla wanted to find a Beatles vinyl record. We went through the boxes and saw some cool vinyl records from bands like Boston, The Rolling Stones, Pink Floyd, and many others. These were bands my dad listened to in his school years, so I wasn't too impressed, but I continued to look to see if anything would pop out at me. I came across a neat Grease record, and decided to buy it, and Kayla found herself a super cool Star Wars record. Our adventure ended up being somewhat successful.

Swappers day is great for hunters, or someone looking for a specific collectible. I guess sometimes, like Kayla and I did, you could come across something neat and want to start collecting new things. The trip to Swappers day and the cool record find gave Kayla the spark to start a new collection. So I can't say the entire experience was awful, but I can say I doubt you will find me walking around the event next year or ever again.

Megan Hatfield ('15) is the Features Editor and head photographer for the Viking Vault.

An Inside Look at the N-UNIT 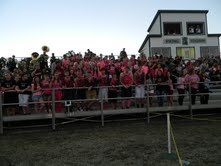 By McKenzie Messer
NORTHRIDGE- N-Unit is the name for Northridge’s student section at school games. Students ranging from freshman to senior gather together at games and support our friends and schoolmates at their games wearing outfits based on that night’s theme.

Students stand on the bleachers chatting amongst friends and sipping hot cocoa, but are also incredibly passionate when it comes to the game. N-Unit follows the cheerleaders’ cheers and dances along with the band as the play next to them. Students gather their cheers together and turn them into a chant when a player does something well.

Senior boys will paint their bodies and write a player’s name and number on the back to show their support. Everyone else just sticks to the theme. Some favorite themes are USA, black-out, and hick night. Cayleigh Kerns’ (’13) favorite theme is ugly Christmas sweater during basketball season because they’re fun and cozy.

Friday September 27th was pink out for breast cancer awareness and every student there was dressed in pink. Mallory Petrella (’15) was sporting pink jeans, a pink hoodie, and even a pink shower cap.  Petrella’s favorite part of N-Unit is that everyone participates in the theme.

Everyone’s favorite part of N-Unit varies from hanging out with friends to tail gates. Caleb Patton (’15), a student at Granville Christian Academy, says his favorite part is the spirit. Since GCA doesn’t have sports, Patton comes to Northridge games to hang out with N-Unit. He’s been to one football games and two basketball games, but he loves it.

Everyone agreed their favorite sport to attend N-Unit to is basketball. Patton says he likes basketball N-Unit because “it’s warmer!”

McKenzie Messer (’15) is the columns editor, literary editor, and staff writer for the Viking Vault 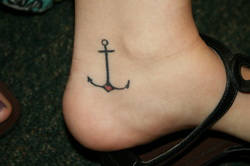 NORTHRIDGE INK
Senior Chandler Eing has a tree and moon on her thigh. The tree represents knowledge of good and evil. The moon represents strength and new beginning.

Junior Adreona Perkowski also has a tree but at the bottom are initials of two of her cousins that passed away and her two little sisters. Her tattoo symbolizes life and also of the people that remind her why life is worth living. The placement of her tattoo is on her left arm, left because it is closer to her heart.

Senior Katelin Ashbrook has a small black anchor behind her right ear. The meaning of her tattoo is to stability and to always hold her ground. To her the tattoo is a constant reminder to never forget your roots and always stay strong. She likes hidden tattoos and it is easily covered. She actually had to hide the tattoo from her dad! But one day while she was working she had her hair up and her dad went in and saw it and questioned her about it. But now it is all good and he respects it.

Junior Hunter Adkins also has a black anchor but with a red heart in it too. She got it with her older sister as a “sister tattoo” meaning they will always be each other’s anchors throughout life.