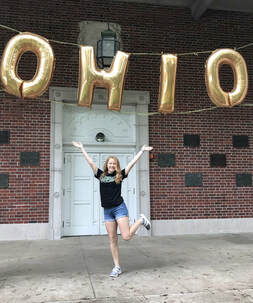 Senior, Rachel Allen at Ohio University for a visit. Photo courtesy of Lisa Allen.
What to look for on college visits
By: Darian Dick
NORTHRIDGE - Many juniors and seniors have thought about college, and most have attended at least one college visit. But what are students doing besides walking around the campus? Some students look into the programs they’re interested in pursuing, sports programs they want to play for, overall location, or the type of campus.

Many seniors have already decided on what college they will be attending next year, and it’s something on many of the juniors minds. But how did they decide which college would be best for them? What stood out on those visits?

One junior, Julia West (‘20), has looked at the University of Cincinnati due to her interest in the medical field. West states that, “I was interested because of how good the medical program is. I have to be in school for a long time because of the profession that I’m interested in and I wanted to see what the extra perks were: how good dorming is and the environment I was going to be living in.”

Another student, Nick Spinosi (‘19), attended a visit his junior year as well, to the University of Cincinnati. Spinosi took interest due to the engineering program they offer at UC. He applied at the beginning of his senior year and was recently accepted!

Senior Rachel Allen (‘19), has been accepted to Ohio University and Bowling Green State University so far. Although she’s unsure of which school she will be attending, she recommends to check what kinds of programs they offer and which ones they excel in compared to other universities. Allen also says, “Meeting with an academic advisor really helped me to decide because I got to have a one-on-one conversation about what I wanted to do in the future.”

West and Spinosi both recommend looking at the campus before making a decision. West said, “If you’re going to be living there for four years, I’d be sure that you really like the campus. Make sure it is not too big or too small for your liking.”

Spinosi adds “I wanted a college that was close to home, but not too close. Cincinnati has everything that I want and is the perfect distance from home!”
​
​- Darian Dick (‘20) is staff editor of the Viking Vault and a senior spotlight editor
January equaled snow days
By: Sarah Phillips
NORTHRIDGE - With only having a single two hour delay before Christmas break, it caused Northridge students to begin to lose hope that we would actually have to go to school all winter without that wonderful call.  However, that quickly changed when the month of January hit. Snow came hard and fast known as the anticipated “blizzard of 2019.” Weather forecasts were calling for five to ten inches! The lowest temperatures ever were recorded this year (January 30/31).

In the last week of January going into the first of February, Northridge was closed for three days for the dangerously cold temperatures and icy road conditions.

Most parents and students wonder what exactly is needed for the schools to be closed.  How cold is too cold? And when are the roads exactly too “dangerous or icy?” With a majority of the high school students driving, it’s a high concern having teen drivers driving in dangerous road conditions, especially when most of them live on backroads.

When Kody Everts (‘19) was asked about this, he said, “Sometimes I feel I’m going to go right off the road! I mean my little Honda Accord can only do so much.”

On January 28th, Superintendent Scott Schmidt sent out an email to teachers and parents about his criteria on closing down the school.  According to the email, Schmidt tries to make a decision about either a delay or closing by 5:30 a.m. Schmidt mentions how he knows how closings/ delays impact everyone, so once he makes a decision he tries to alert them as soon as possible (Twitter for most students).

Even though it seems like temperatures might be warming up, winter is going nowhere anytime soon.  According to the Farmers Almanac, a website that very accurately predicts the weather months in advance, we should be getting more snow and lots of cold winds in late February. Spring is more than likely further off than we wish, with the Farmer Almanac predicting an East Coast storm with “wintry precipitation” from March 20-23, making the transition from winter to spring.

So even though the days of having a snow day every week my be over, snow days in general certainly aren’t past imagining for the rest of winter.
​
-Sarah Phillips (‘20) is the Entertainment Editor of the Viking Vault 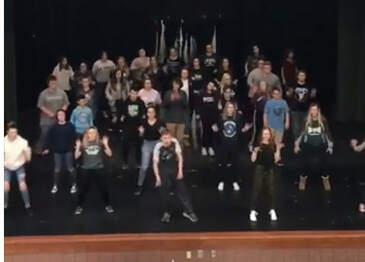 The Lion King cast is shown here in early rehearsals of the number "I Just Can’t Wait to be King." Photo courtesy of Mrs. Hepp.
Counting down to The Lion King musical
By: Alyson Quinlan
NORTHRIDGE - NHS has begun preparing for their next musical production, with this year’s pick being The Lion King. The preview for it isn´t official as of now, but the full production will be performed in the High School Auditorium on Friday and Saturday, March 8th and 9th at 7:00 pm and again on Sunday, March 10th at 3:00 pm, with tickets costing $12 for adults and $10 for students/seniors.

The Lion King was a Disney original film about a young lion named Simba, son of Mufasa, king of the pride. Growing up, Simba's father taught him how to one day take his place. But a very unfortunate accident leads to his need to take that spot much sooner than expected and battling with his evil uncle Scar for that very spot. During his journey, he meets a lioness named Nal, as well as many other unlikely friends that help him get his father's spot back from Scar.

Mrs. Jody Hepp, musical director, said she chose The Lion King this year because, "We did The Little Mermaid a few years ago, and it went over really well.  Students loved doing it, and audiences loved seeing it.  We hope Lion King will bring that same excitement. So far, I think it might even be better!"

Katie Debolt ('20), playing the lead role of Nala, states that one of her favorite parts about this production compared to all the others she has been in is the music: "I really like the music because it gives me the chance to sing in an African language."  Aiden Cupp ('20), who is playing the part of Pumba, says that "I really don’t have a favorite part of the show, but I think as a whole it’s going to be fantastic."

Do you remember the feeling you got the first time you watched The Lion King? Well, you can experience that again live from a cast of Northridge students you learn beside every day. So if you're a Disney fanatic or you just want to support the cast, students involved in this production say it is something you can't miss!
​
- Alyson Quinlan ('20) is an assistant print editor for the Viking Vault.
Powered by