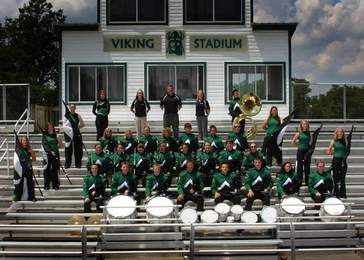 By McKenzie Messer
NORTHRIDGE - November 2nd, the Northridge Marching Band made history when they went to states held at Hilliard Bradley for the first time ever.

The band is in class C due to the small school size; however, they were given high scores. Out of a five, they were rated one, or superior, in the last two rounds to qualify for states. The first three rounds they were rated two, or excellent. The band consists of 36 members, including color guard. All members performed at the State competition, although the season scores for the color guard do not count towards qualification for States.

Member Nathan Castle (’14) has been playing percussion since 7th grade. He said the feeling of making states was "like taking a pee after waiting a very long time."

Olivia Langley (’15) remembers that “everyone cried at states and when we found out we made it, it was a river.” Langley also says, “If you can play an instrument, we want you to join!”

Juniors make changes to Northridge
By Hunter Adkins
This fall in  Mrs. Garee’s College Prep American Literature class, students were assigned to write proposals to change or improve something at Northridge Schools. The ideas could have tweaked existing aspects of any of the buildings or grounds or even proposed something completely new. This project was called  “An even Greater Day to Be a Viking," and some of the proposals may even be approved.

Seven proposals will be going to the Board of Education at their Monday, Dec. 16 meeting. Other proposals are being reviewed by Principal Ms. Anderson.

What the students had to do was pick an idea, research it in any way they needed to, write a formal and persuasive proposal, and then present their ideas to class in the form of PowerPoints or Prezis. The classes get to vote on their favorite proposals, and it was many of those ideas that are moving on to the Board of Education.

Some of the  top voted ideas were, Shanlee lamp and Joy Goodman with their Coffee Shop, Jared Smith, Nick Britton, and Macy Adams with having a school store for Northridge selling a variety of items, Nathan Davis with getting Fridays off by making Mondays through Thursdays an hour longer each day, Matt Hebert with having a later start to the school day ,
Tate VanFossen with switching the vending machine snacks back to $.50, a proposal to have a competition Show Choir by Ronni Fleshman and Mirandah Popp, and a detailed plan for a new baseball score board pitched by Brad Wilson. All of these students will present at the board meeting.

Other projects have either already been approved by Ms. Anderson or are in the process. Those include Chad Campbell's proposal for a larger net for the new score board in the gym, Canden Chapman's idea for a Marketing/Statistics course, a History Club being run by Steven Krehel and Javier Padilla, and Alexis Absten's idea for installing feminine product dispensers in the girl's bathroom.


Shanlee Lamp  (15’) said that having the proposed Coffee Shop could “give a sense of relaxation to the  student as well as go towards prom and school field trips.” Another
thing is  students could get community service hours or a credit for business
management.  The coffee shop would be open every day, periods 1-4 in the
concession stand.  They would offer coffee, hot chocolate, juices, fruit
smoothies, fresh fruit,  and breakfast foods.


Matt Hebert  (15’) has the idea of starting school at a later time. The students who
attend  the primary start at a later time than those who are in the
Intermediate, middle  school, and high school. Hebert said all we would have to do is switch
the times for the  schools and nothing would change. Hebert said, “It’s a proven
fact that younger  kids are more awake in the morning compared to teenagers.”
Doing this would  improve attitudes, grades, and health for the
teenagers.

"All of these  are great ideas that can make Northridge an even better school," said Mrs. Garee. "I was probably more impressed with the quality of work I saw in these projects than I've been by any project that's been done in my class. I think that goes to show that people in general work harder when they see the big picture, when they feel like there's a point to the time they're putting in. I couldn't be prouder of these students."

Hunter Adkins (15') is an Editor for Sports and Extras

Ski club hitting the slopes soon
By Amelia Kyle
NORTHRIDGE- Ski Club is back in action. During the months of
January and February, Northridge students can travel up to Snow Trails in Mansfield, Ohio, to enjoy a favorite activity with friends.
Snow trails offers ski and snowboarding lessons that are available to Ski Club members.

Students can get lessons while at Snow Trails to help further their skiing and snowboarding abilities. Second year member Emily Dalton says she chose to join as a sophomore “to try something new. I am glad I did.”

Skiing expeditions to Snow Trails will be January 5th, 12th, 19th, and 26th, as well as February 2nd and 9th. Northridge offers busing. The buses will depart from Northridge at 1:15pm and arrive back to the school at 9:45pm.

Northridge offers Ski Club for seventh to twelfth grade students. Four-year member Jack Roudebush (’15) says “I went up to the snow trails tubing once and saw people snowboarding and was hooked.”

Amelia Kyle is a journalism student participating in the newspaper class fifth period. Photo caption: One of last year’s Ski Club members considers the slope before him. Foot selfie by Devin Moore.