BRENTON ICKES: "The momentum has come from each other, our staff, and the support from the community. The coach makes the team feel like a family. We prepare ourselves to the best of our abilities throughout the week, which is why I believe we've been successful."
- Grade 12, #8, Wide receiver, Corner 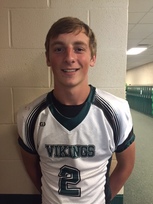 DANIEL HATFIELD: "The new attitude from our players is what has caused the positive momentum this year. Our work in the weight room has made everything positive, and all of our work over the summer has done the same."
- Grade 11, #2, QB/Safety

ALEX WEBB: "Offensively, the work we put in during the summer established chemistry in the season. Every win means a lot. Getting our first LCL win got us more and more hungry, and we're ready to win more. The entire senior class is full of leaders. Everybody steps up and does their part, which is different than it has been in past years."
- Grade 12,#45

LOGAN PARKER: "The players are getting motivated and hyped before games this year. I feel that this momentum has come from an overall change in the community. People are beginning to believe in the football program once again, which gives us more motivation in return."
- Grade 12, #60, OL/DL

LOGAN GAREE: "The team is like a family. We go hard each play for the people around us. People on the team, like Gunner Absten and Gage Linkous, took leadership roles by switching their positions for the better of the team."
- Grade 11, 3, RB/Strong Safety 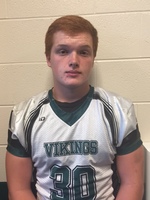 GAGE LINKOUS: "Our team as a whole is clicking really well this year. Our coaches have pushed us and shown us what we are capable of doing."
- Grade 11, #30, RB/RG/MLB 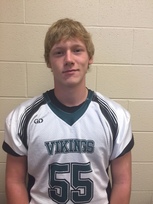 TREVOR ROACH: "We have a good connection out there. We feed off each others' positive energy, and that gives us the ability to play well. We get more momentum after each win. After the first win, you just get hungry for more. We want to keep on winning and bring pride back to the school and community. I think Daniel Hatfield's leadership skills have helped us a lot. He never gives up on the field and works hard no matter what, which inspires everybody."
- Grade 11, #55, RT/RDE 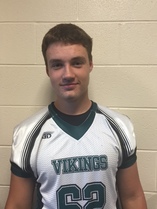 AUSTIN WHITE: "We work as a family, we play for each other, we have each others back when we need each other the most."
- Grade 11, #62, Tackle/Guard/D.end/D.tackle 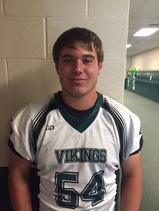 JOHN BERKLEY: "What's working changes each week. Sometimes it's the offense clicking and scoring big, and sometimes it's the defense doing well. There's a whole new attitude. All the work in the weight room over the summertime helped. I would say Daniel Hatfield has helped to drive the wins with his big break-out runs."
- Grade 10, #54, D.end/RB/O.line 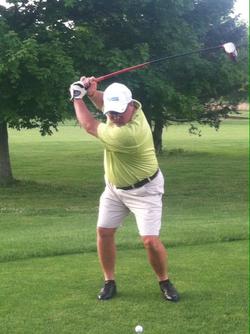 Coach Scase at the top of his backswing at the Medallion Golf Club, Westerville, OH. Photo by Andy Watson ('16).
Northridge golf coach swings to glory
By:  Andy Watson

NORTHRIDGE –  One of the many changes at Northridge this fall includes a new Golf coach.

The new coach is Richard Scase, and he has never coached high school golf until this year. “I’m just happy to be here seeing kids having so much fun,” Scase said.

He is the Assistant Superintendent of Medallion Golf Club in Westerville, Ohio and works there full time.  Coach Scase has three daughters, ages 23, 19, and 17.  He also has four step-children, Blake, Chase, Reece, and Jordan.  Though busy with family obligations, Scase said he is thrilled to be helping out at Northridge.

During high school, Rich received twelve varsity letters.  He was also in the U.S. Army from 1985 to 1993.  He spent two years as an active duty soldier and served six years in the reserve.  When asked what he would like to ultimately accomplish through being the Northridge High School golf coach, Scase said that, “As corny/weird as it sounds, I’d like to have 35 people try out for golf next year. Not just in high school golf, but possibly to even start a middle school program and to see kids having fun playing the game of golf.”

Scase has 30 years of experience playing golf. “Starting in high school and in following years, (my friends and I) would play upwards of 100 holes of golf per day.”  The practice definitely paid off when he was part of the PGA of America for three years and signed on a sponsorship from Titleist.  One would think that being on the PGA, he has already had his “glory days” of golf, but that is not the case. Coaching, it turns out, is “really fun” for Scase.

When asked what was his most memorable/favorite part of this golf season so far, he said that it was at a multi-school invitational in the LCL.  The scores were posted, and Northridge had done very well, and “another coach’s eyes lit up, and I was very proud to be part of the reason people were finally noticing the talent here at Northridge.”

The team has been solid for a couple years now but is now focusing on a great season.

Northridge golf’s home course is Clover Valley, and by working there over the summer, (washing carts off, fixing divots, etc…) for four hours a week, the golf team members can play golf whenever they don’t have tee times.  The team plays at courses in Ohio that are not necessarily cheap courses.  The varsity team, in fact, especially plays at courses that are around $100/$125 for a single person to play a round, but with a pay to play of $200 we can play a full season of these fantastic courses. 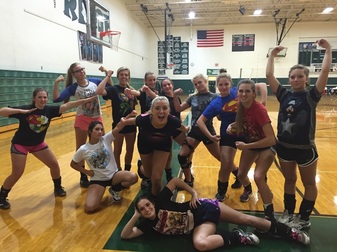 NORTHRIDGE – The Northridge High School volleyball has kicked off into the 2015 season. Since starting the season at the beginning of August, their record is 1 and 7.

This season Northridge volleyball is being represented as a freshman, a junior varsity, and a varsity team with a total of 24 girls in the program.

In preparation for the season the volleyball teams have participated in practices throughout the summer as well as two-a-days during the last few weeks of the summer leading up to school. During two-a-days practices were held for a period of 5 hours.

On the night before the team was officially allowed to practice they met at the high school at midnight to participate in what they call “midnight madness” in which the teams participates in a series of scrimmages against each other to celebrate the entering of a new season.

Jordan Crow ('18) says that “the team bonds really well together on and off the court”.

Senior Night for the seniors participating in volleyball will be held at home on October 15th against Johnstown. Banners of the seniors can now be seen hanging up in the gym above the visitors bleachers.

Senior co-captain on the varsity team Jamie Swickard ('16) says “We’re getting better every practice. I have high hopes for the rest of the season”.

To raise money for breast cancer, volley for the cure will be held home on October 13th against Newark Catholic. 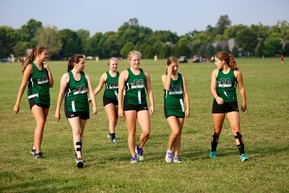 A group of the girls cross country runners prepare for a race. Photo by James Poole.
Running wild at Northridge
By: Megan Dalton

NORTHRIDGE – It’s what everyone dreads and avoids at almost all costs. From athletes to non-athletes, it’s the most pain-inducing word you could hear: RUN. So let’s see what makes people join a sport like Cross Country that is, after all, just constant running.

Every athlete’s stomach hits the ground when they hear their coach tell them to, “get on the line.” Why? Because that means they will have to do some running. I couldn’t figure out why anyone would choose a sport with no other objective, so I decided to find out. For the first time in Northridge history, we are able to compete as a team on the middle school and high school levels due to enough participation. That equates to a minimum of 20 runners, and this year’s roster features almost 30 from grades seven to 12.

One of these madmen who runs for fun is Zach Smith(‘16). This is Smith’s second year in Cross Country, and he also runs track. When asked why he willingly runs, he says, “I don't willingly run, but between the pressure placed on me by Ms.Murphy and Mrs.Garee, I felt like I had to run. Also, it is a nice way to stay in shape.”

Cross Country has gained a lot of first-year runners, many being seniors who just wanted to, “do something fun during the fall season.” First year member, Leyna Varney(‘16) says she joined because, “it’s my senior year and I thought it would be a fun thing to do with my friends.” Varney’s favorite thing about running it seeing how she improves each week and cheering on her friends.

The team practices Monday- Friday and have meets during the week and most Saturdays. Practices consist of running (of course) various lengths, core, and lifting. The meet races are 3.1 miles, and the teams race many schools from around the area.