NORTHRIDGE- The Northridge High School football team is hosting their second lift-a-thon in the school’s weight room in order to get money for uniforms and team clothing. They haven’t discussed when it will be or what time but they will be planning it soon.

Football player, Austin Chambers (‘17) says, “The purpose is to raise money for the team to make our uniforms and team clothing cheaper. It brings in a crowd to the weight room, which inspires the younger athletes to do more and try harder.”

Each player asks his friends, family, coworkers or anyone else they want to donate money to them. Each person donates a certain amount of money per pound that the players lift. Then, at the lift-a-thon they are allowed to come watch the players do three rounds of squats and three rounds of bench press. If you collect enough money your football clothing will be free. If someone donates $0.50 per pound, and a player lifts 200 pounds, then they would have to pay $100.

Football player, Nick Hatten (‘18) says, “It betters us as players because it shows our strength and what we’re capable of doing. Our numbers have grown from last year. We couldn’t lift as much weight as we can this year.”

The players hope the upcoming event brings in lots of people to support and a lot of lifting for their cause. 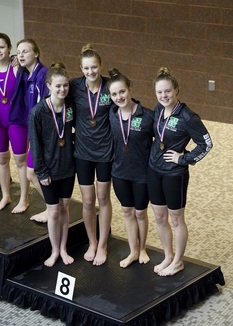 NORTHRIDGE- The swim team has been the topic of conversation at Northridge since the start of the season. Time seemed to fly as the season progressed and the athletes got quicker. Swimmers and supporters can agree that the Vikings swim team made a splash this season.

The team ended the season with a strong performance at the Division II district meet on February 19 at Ohio State. The girls placed eighth overall on the 400 freestyle relay, stepping onto the podium ahead of 29 other teams. Josie Bunstine (‘16) placed seventh in the 100-yard breaststroke, and ninth in the 100-yard butterfly. Joining Bunstine, Katelyn Darby (‘18) took 10th place in the 500-yard free. Eight other swimmers qualified for districts, including Alex Rahde (‘18), Maddi Giffin (‘18), Brian Scott (‘19), Gabe Miller (‘18), Victor Weaver (‘18) and Eli Rushmore (‘17).

Despite facing tough competition at the Division II district meet, the results were extraordinary. The Northridge swim team brought home seven school records all together. Miller (‘16) says, “We are a small school who most people don’t expect to do well, but when we do, the faces of our opponents are great. It’s my favorite part.” The swimmers have surely blown away all expectations this season.

Even before the success at the district meet, the swimmers at Northridge were dropping times and racking up school records. The team competed in various meets throughout the season, winning event after event. The improvement of the team was reflected in results. Bunstine (‘16) remarks, “At the beginning of the season we had a lot of people that had never swam before who got a ton better over the season. We started winning trophies and getting second and third at meets. Their times got dramatically faster which helped our team a lot.”

At the center of it all are coaches Rachel Furr and Amanda Chapman, who strive to make their team better every day. Darby (‘18) says, “Our team is amazing. The coaches are a great and everyone works really well together on the team.”

The Northridge swim team truly executes the word “team.” The key to their success seems to be the bond between them. Bunstine (‘16) says, “Everyone is so close and so happy to be there. It’s so much fun. We’re constantly laughing and joking. I love the people and that’s what makes it fun for me.” An important quality for success is teamwork, and Northridge seems to have it all.

All of the hard work these swimmers put in surely paid off. Many look forward to next season, already planning to improve and break more records, even hoping to qualify for districts and go to states. Fans and students will agree that the swim team can, and will, accomplish their goals. But for now, the spotlight is on the success that this season has brought for Northridge. 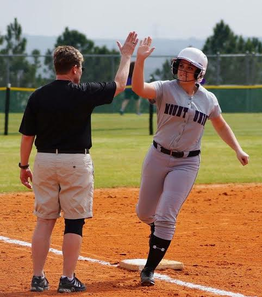 Siedlak makes her way around the bases at the University of Mount Union. Photo by Leigh Siedlak.
First year teacher doubles as head softball coach
By: Cora Dorman

NORTHRIDGE- Softball season is underway, but that wouldn’t be possible without the hard work of the coaches. Leigh Siedlak is one of those hard working coaches. She is the Varsity head coach and a first year math teacher at Northridge.
​
Siedlak has big plans for the softball teams: she plans to have a very competitive team that wants to win, and she also wants to eventually win the LCL and districts.  Siedlak wants everyone to have fun; she believes, “It’s not worth it if you’re not having fun.”

Softball player, Megan Trainer (‘18), hopes for a great season and says, “Hopefully the hard work with Coach Siedlak will payoff.”

These ambitions mean that Siedlak has to be very organized, at all times.  Not only does she have to balance softball with her other activities, she has to balance being a first-year, full-time teacher. She states, “It’s tiring, but it’s nothing that I can’t handle.”  In order for her to accomplish all of this, she must manage her time wisely.

Siedlak mentions, “I make sure softball is fun, so it’s not second job.  It’s something I do with my free time.”

She decided to be a softball coach at Northridge because she loved playing softball and coaching in the summer for the 15 and under Ohio Stingrays team.  Siedlak adds, “Even though I don’t play anymore, I like to share my passion with other people and help them learn about the sport.”

Siedlak has a broad softball background. She played all through high school and played for the University of Mount Union in college.  While playing college softball, she broke the homerun record. The record stood at 20, and she broke the record with 21 homeruns, then finished the season with 23 homeruns.

Siedlak loves being the Northridge softball coach because of the great girls she coaches. She says, “There’s a strong bond and everyone has helped me out as a first year coach.”  She also loves the community, the small school atmosphere, the kids and the great teachers.

Being a teacher at the school where she coaches allows Siedlak to see student athletes throughout the day, have more face to face time with softball players and watch their grades. She is a firm believer in “student before athlete.”

Siedlak was born in Toledo, but her family didn’t stay there for long.  She eventually moved to Westerville and attended Westerville South. Central Ohio is where a lot of her family is, and she has been in Westerville a majority of her life.

Besides teaching and coaching, she enjoys reading, cooking and scrap booking in her free time.