Juniors Chris Curran, Quinn Love, Rebekah Kalas, Riley Bunstine, and Katie Debolt posing for a photo in their I-PROM shirts on Thursday, May 2. These students helped promote the I-PROM promise at school and encouraged others to follow their lead. Photo courtesy of R. Kalas.
Staying safe and saying “yes” to I.P.R.O.M.
“I Promise to Return On Monday”
By: Mackenzie Holder

Recently, 30 shirts were donated by a Licking County youth organization to Northridge High School to help get the word out about the I-PROM promise, a commitment high schoolers can make to abstain from dangerous activities on Prom night that stands for “I Promise to Return On Monday.” Many students wore these shirts on May 2nd, the last day of school before the May 4th Junior-Senior Prom in Utica, walking around and trying to convince others to live by the I-PROM promise.

What the I-PROM promise promotes are happy and healthy alcohol and drug-free Prom night. By wearing these shirts around the school, it was hoped that this would encourage kids to make good decisions after Prom. Many said seeing these shirts around the school would help kids understand the importance of this promise and allow many others to join in.

Statistics show that, in the year 2016, one out of five teenagers that were involved in fatal crashes had been drinking beforehand. In the same year, 16 percent of 15-18-year-old drivers that were involved in crashes had been drinking. Some of the consequences that can come from drinking and driving or being on drugs while driving are jail time, loss of drivers license, fees, court costs, college acceptance, scholarships, and academic eligibility, or worse, death.

A group called the Youth Leadership Council (YLC) were the ones who donated the shirts to all of the local schools in hopes of keeping everyone safe during their Prom weekends. Rebekah Kalas (‘20) was in charge of bringing this promise to Northridge High School because she is part of the YLC and has been part of this organization for about a year. Kalas chose to promote this promise because “It made me feel like I was responsible to make good decisions after Prom and represent our school in a good way.” The day after Prom, Kalas had to play in a basketball tournament so she knew that her decisions on the night of Prom would have major consequences even beyond safety.

NHS administrators say they are happy to report that no students failed to return Monday as a result of any post-Prom injuries.

- Mackenzie Holder is the print editor for the Viking Vault.
19mholder@northridgevikings.org

Northridge High School Final Exam schedule is shown here. Photo courtesy of Chrissy Willeke.
Final Exams: schedule and tips for success
By: Alyson Quinlan
NORTHRIDGE -This school year is quickly coming to an end, but that also means that final exams are just around the corner. These tests will often be a combination of all the things you have gone over throughout this school year or semester, and sometimes it's a culminating final project. These tests are very important because they count towards 20% of your final semester course grade.

Final exams will occur on May 28th - 30th. You will get an exam schedule telling you the times of your exams, depending on your period. You will often have, at max, three exams the first two days, with another time slot to make up any missed exams, as well as three exams on the third day. Most times you don't have an exam for every time given so if it's at the beginning of the day or the very end you could come to school right before your first exam or leave right after your last exam. Still, if you have no exam in the middle of the day, you can go to a study hall in the auditorium until your next one.

If you are wanting to leave after your last final, then you will have to fill out a form saying when you will be leaving, with your parent’s signature saying they approve of you leaving school at that time. This form will have to then be turned in to the office before the first day of testing for you to be able to leave. After that, all you need to do is sign the sign-out sheet your teacher will have at the front of the room for anyone that is wanting to leave.

Something to look forward to the days you will be taking exams: Mrs. Garee said, "There may be a lemonade bar for anyone who would want a refreshment between tests, as a pick-me-up."

4 Tips On How To Study For Your Finals

Find How You Best Study - Another strategy is finding your best way of studying, whether it’s rewriting definitions over and over, using flashcards or even creating your own test. Some helpful online study resources would include sites like Quizlet, Brainscape, and kahoot.  Everyone learns best in different ways, so find your way and apply it to all your study sets. For example, Hannah Bilderback ('20), “Joins up with a group of friends and studies together while creating fun ways to help remember the content." Meanwhile, Maci McMillen ('20) "creates flashcards online using Quizlet, as well as looking up videos" to help her “when she is having trouble."

Ask For Help - Another really important thing you should do is if you are having trouble with something in a class: don't be afraid to ask for help. Teachers are there to help you learn the information and most likely would be more than willing to help you understand the topic you are struggling with. The only thing you would have to be prepared for is to go in during your lunch or before or after school.

Take Breaks - One of the biggest and most important tips for studying is making sure you take breaks in between. Studies show that every 50-90 minutes of studying you should take a break. This is because often if you continue through this time period, you will be less efficient and most likely not accomplish very much. You will have a much easier time remembering the information if you give your brain time to take a break instead of burning yourself out. 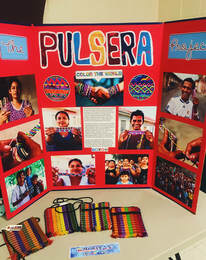 Poster showing The Pulsera Project. Photo courtesy of Señorita Mitchell.
Pulsera bracelets spread support
By: Lyndsey Stocks
NORTHRIDGE - For two and a half weeks, Pulsera bracelets and woven bags were sold by both middle school and high school Spanish Club students during their lunchtime to raise money for the Pulsera Project. All the money that was raised has gone to support Nicaraguans living in poverty as they try to become artists.

Each Pulsera bracelet sold goes to help Nicaraguans in need. As of right now, about 30% of the Nicaraguan population lives on less than two dollars a day. The Pulsera Project is a non-profit organization who works in employing almost 200 Nicaraguan and Guatemalan artists each year.

The Pulsera Project helps with funding many programs for Nicaraguans. These programs include secondary education, university scholarships, workers’ rights advocacy, and healthcare.

The Pulsera Project at Northridge was lead and run by Señorita Mitchell and the Spanish Club. Throughout the time bracelets and bags were being sold, the Spanish Club met many times to track sales and make sure the project was running smoothly.

When asked about specifically choosing this project, Señorita Mitchell responds, “I felt that the Pulsera Project was an amazing opportunity for us at Northridge to be part of the bigger picture to demonstrate that despite being a small school we have big hearts and minds that are ready and willing to give and share knowledge with others willing to listen.”

This project also allowed a way for students in all levels of Spanish to learn and gain new experiences while teaching their peers about important issues. Señorita Mitchell explains, “I feel like it was successful because the students selling the bracelets knew why and could communicate that to their classmates. Each bracelet was unique and affordable so students were able to express their own style and preferences in a way that was accessible while supporting an amazing non-profit organization.”

Valarie Nethers (‘21), currently in Spanish I, explains, “Given the complexity I saw in some of the bracelets, it was obvious that quality time was spent working on them. Getting to support this cause was a great experience.” Each bracelet takes about thirty hours on average for an artisan to create.

Throughout the process of selling bags and bracelets, students continued to learn more about Nicaraguans lives and their daily struggles as most of them live in poverty. They got a unique chance to see the work put in by the artisana into the bracelets and bags that were created.

In total, $1,128 was raised, and 218 bracelets were sold. As for the woven bags, five were sold. This money raised will go on to provide Nicaraguans with 4.3 months of fair trade employment, 18.8 months of schooling, and just over half of a housing project for an artisan.

As for the future, Senorita Mitchell already plans to bring the Pulsera Project back to Northridge next year.

- Lyndsey Stocks (‘21) is the Assistant Web Editor of The Viking Vault.21lstocks@northridgevikings.org
Powered by